Twin Spin is a NetEnt slot that is a basic, straightforward, simple rendition of the classic slot machine experience.

Looking for a slightly old-fashioned slot, but also something with a really innovative feature? If so, you should definitely spin the reels of Twin Spin , a simple, yet enjoyable slot from Netent with 243 ways to win and a huge top prize. On this page, you can find out all about this fantastic game, including how much you can win and what this slot’s exciting bonus feature is.

You don’t just need to read about this slot to find out whether you should play. This is because we also give you the chance to play free Twin Spin slots on this page, so you can test the game out for yourself. If you do like it, you can then head to a casino we recommend and play Twin Spin online for real money – you might win a huge prize when you do!

Below, you’ll find our Twin Spin review, which looks at this top slot from Netent from every angle. Once you’ve finished reading and playing the free version of the game, you’ll know if you want to play this slot for real money. So, keep reading our Twin Spin slot machine review to find out more!

Twin Spin Theme
Twin Spin doesn’t really have a theme, and is instead based on a traditional slot machine, mainly because it uses the symbols you’ll normally find at slot machines of old. It’s certainly extremely bright, using bold colors both around the reels and on them, and this creates a fantastic look and feel. The soundtrack is also great and adds even more excitement to this slot.

As already mentioned, this slot has traditional slot symbols. This means you’ll find cherries, bells, BARs and sevens. In addition, you’ll also find diamonds and wild symbols. As you’ll find at a number of other slots, the lower paying symbols are playing card values. They’re simply drawn and fit in with the overall look of the slot very well.

Betting Options
The minimum bet amount at the Twin Spin online slot is $0.25, which is higher than at some other slots. This means that those who like playing for the lowest possible stakes could decide to give Twin Spin a miss. The most that can be bet per spin is $125, which should be more than enough for everyone other than the biggest spenders.

In order to alter how much to bet, you’ll need to change the “Level” and “Coin Value” fields. You can do this by clicking on the green tabs either side of them. Alternatively, if you want to play for the highest stakes, just press the “Max Bet” button. As with nearly every slot, the more money you bet per spin, the more money you could win.

Bonus Features
There is only one special symbol at this slot, and it’s the wild symbol. It’s easy to identify, as it simply says “Wild.” This symbol can be used to substitute for any other symbol on the reels, meaning it’s incredibly useful. There’s nothing special attached to it, such as a multiplier, which might disappoint some.

The only special feature to mention is the Twin Spin feature, which works in a simple way. On every spin of the reels, at least two neighboring reels will join together and land on exactly the same symbols. This gives you a better chance of getting multiple winning combinations on the 243 different ways to win this game offers.

Twin Spin ’s Maximum Win
The most that can be won on a single payline at the Twin Spin slot is 1,000x your level, then multiplied by your coin value. This means that those playing at the highest stakes can win $5,000 per payline. This isn’t the most that can be won overall though, as the game itself states that 270,000 coins is the maximum prize, which is $135,000 for those betting the maximum. This is possible as you can win multiple prizes on a single spin of the reels.

Is Twin Spin Worth Playing and Who Should Play It?
Twin Spin is, without doubt, one of the most popular games Netent have ever produced, and the fact that it’s enjoyed by so many means it’s certainly worth playing. It might be simple, however this doesn’t stop the gameplay from being hugely exciting, plus everyone should love the huge prizes on offer to the luckiest of players.

Twin Spin really is a slot to suit almost all players. It will appeal to those looking for a simpler option, however those with a love of features will enjoy the Twin Reel feature, which can lead to five reels being linked together. The only warning would be to those with lower bankrolls, as this slot has a reasonably high volatility, meaning small bankrolls might not be able to get through long periods without many wins. 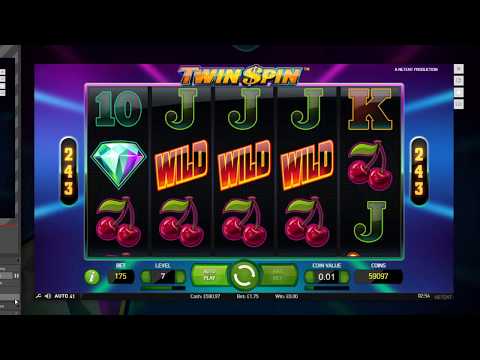 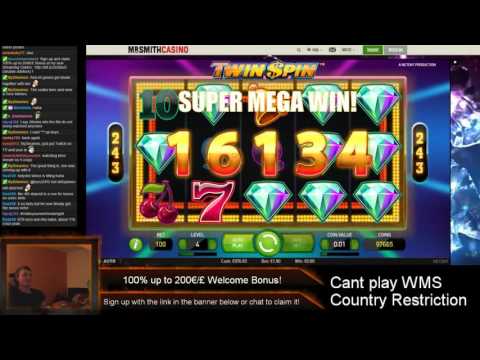 Twin Spin is an exceptionally simple slot machine to play. Choose how much to bet and then hit the circular button under the reels, which will start the reels spinning. When they stop, you’ll win a prize if you get three or more identical symbols on consecutive reels, starting from the first reel. There is no Twin Spin bonus game to worry about working out how to play. That’s it – learning how to play Twin Spin really is incredibly easy!

Looking to find out how to win on Twin Spin ? If so, stop right now, as you’re not going to find any way to cheat the game. After all, why would Netent include a way to exploit the game? It would only cost them money if they did. Just accept that every spin is down to chance, so all you’ll need to win the Twin Spin jackpot is a nice slice of luck.

According to Netent’s website, the Twin Spin RTP is a decent 96.55% – the average return-to-player for an online slot is around the 95.50% mark. This means that you’ll have a better-than-average chance of winning when playing this slot. For those who don’t know, the Twin Spin RTP of 96.55% tells you that, over an exceptionally long period of time, the game will pay back 96.55% of money spent on it.

Take a look through the table we’ve created, which quickly tells you all the important pieces of information you need to know about the Twin Spin slot machine. You should then stop reading and start playing, by loading the free Twin Spin slot on this page. Alternatively, you could head straight to one of our recommended casinos and start playing the game for real money!