Read everything about the RTP and learn how to win. Play Conan Slot machine directly for free or money. No download necessary.

Those of a certain age will remember Conan well. The sword-wielding hero, played by Arnold Schwarzenegger, battled enemies at every turn and amassed a strong cult following in the 80s, which is still around today – something that should make the new Conan slot machine from NetEnt an extremely popular one. It’s a game that offers everything you’d expect from this giant software company, including linked reels, exciting bonus features and, of course, a monstrous jackpot.

As it’s a slot from NetEnt, you can be sure it’ll be of the highest quality. However, if you’re not convinced, why not play free Conan slots here on this page to give yourself the chance to experience everything this 80s icon has to offer? If you do find that you enjoy playing – which we’re sure you will – you can then start to play Conan online for real money at one of the top online casinos we recommend. You could win a giant jackpot when you do!

As fans of the Arnie classic, we spent hours spinning the reels of this slot and reminiscing about the various gore-fests the Austrian superstar has brought to the screen over the years. After a while, we’d experienced more than enough to put together this Conan slot machine review, which takes you through everything you could ever need to know about this superb new offering from NetEnt.

The theme of this game won’t surprise anyone, as it’s based on the famous movie franchise of the same name. You’ll find stone columns hemming in the reels, while behind, there’s an apocalyptic scene with orange skies and medieval-looking buildings. It stays true to the movie, and this should keep all fans happy.
On the reels, you’ll find various symbols, including lions, snakes and birds of prey, as well as swords and other items every action hero needs. The higher paying symbols are three faces: Conan’s ally Valeria, his sworn enemy Thoth-Amon, and Conan himself. The reels truly look fantastic, and you’ll be impressed regardless of whether you’ve seen the Conan movies or not.

Betting Options
The minimum bet available at the Conan slot is 0.20 per spin, while the maximum you can bet is a giant 200. It’s straightforward to adjust how much you bet – just click on the up and down arrows to either side of the Coin Value field. As is nearly always the case with online slots, the more money you bet, the more you could find yourself winning.

Bonus Features
When writing this Conan review, we found that it’s a particularly feature-heavy game, and the first to mention is that it pays both ways. This means that wins can be made on the 24 paylines from both left to right and right to left. This effectively means that it’s a 48 payline online slot machine.

If you’ve ever played Twin Spin, you’ll be familiar with the following feature: Linked Reels. At any point, two reels could link together and spin in unison, displaying precisely the same symbols when they stop. During the free spins, it’s possible for up to six reels to all link together.

Next up, three features can kick into action on any spin. The first is Tower Wilds, and this sees any blue tower wild symbol landing partially on reels one or two growing to cover the entire reel. Then there’s Mystery Symbols. Land one on reel three and one on reel four, and they’ll transform into the same symbol. If you manage to land two identical stacked symbols, the Mystery Multiplier feature starts, which sees Conan fight a snake, increasing your multiplier by one with every hit. It’s possible to get a 7x multiplier during this feature.

The final random feature is Battle Wilds. When you see a red battle wild appearing anywhere on reels five or six, it will expand sideways for up to three spaces. As you can imagine, this can lead to some huge prizes.

If you can get all features simultaneously – a Tower Wild on reel one or two, Mystery Symbols on reels three and four and a Battle Wild on reel five or six – you’ll start the Thoth Amon feature. This sees three to six mystery symbols randomly added to reels two to five, often resulting in massive wins.

You’ll also find free spins at this slot, which are started when you get three, four, five or six scatter symbols on the reels. This will lead to 10, 15, 25 or 50 free spins, respectively. You’ll then be able to choose from three different free spins options.

The first option is City of Thieves Free Spins. This is a medium volatility bonus game that sees Tower Wilds appearing on any reel. These can expand to cover reels, either partially or fully.

Then there’s Temple of the Serpent Free Spins, the most volatile option of the three free spins bonuses. Mystery symbols can land on all reels during this bonus feature, and these will all turn into the same symbol. Get a fully stacked Mystery Symbol, and the Mystery Multiplier feature starts. Get five to nine Mystery Symbols, and the Thoth Amon feature starts.

Finally, there’s the Walls of Tarantia Free Spins bonus. This is another medium volatility bonus feature, during which Battle Wilds can appear on all reels. When they do, they’ll expand sideways up to three positions.

Conan Maximum Win
So, what is the most you can win when playing the Conan online slot from NetEnt? You’ll be excited to hear that the biggest possible prize is 2,016x your bet, which means that those playing for the maximum of $200 per spin could find themselves scooping a huge prize worth $403,200.

Is Conan Worth Playing and Who Should Play It?
Conan is certainly a slot that’s worth playing, as it offers everything a player could want: a great theme, superb features and, perhaps most importantly, a large top prize.

Those who have seen the movies will particularly like this game, as they get to reminisce while they play. However, don’t worry if you’ve not seen them, as there’s still plenty in this online slot for you to enjoy. It’s quite a complex game, so it might not be the best choice for those new to the world of online slots. 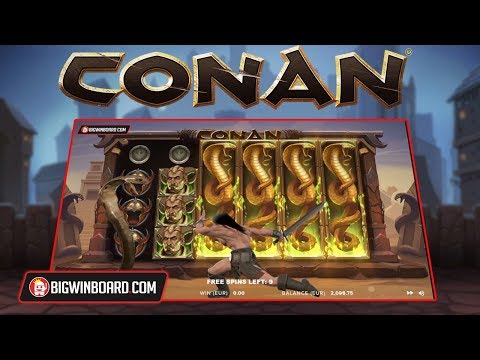 Working out how to play Conan is straightforward. Just select your bet size and then spin the reels. You will win an instant cash prize if you manage to land enough identical symbols consecutively on a payline, starting from either the left or the right side of the reels. You could also start a Conan bonus game, all of which can lead to some impressive prizes.

While it’s easy to tell you how to play, it’s not possible to tell you how to win on Conan. This is because a random number generator controls the game, meaning that every spin is random. Therefore, you could find yourself winning the Conan jackpot on your next spin or having to wait hours to spin in a decent win.

The Conan RTP comes in at 96.01%, which is slightly above average. This means that the average player will win back $96.01 for every $100 they bet. However, remember this return-to-player is only an average, meaning there’s no guarantee you’ll win this exact amount. There is no way to change the Conan RTP.

We’ve created this table to show you all the important statistics and features of the Conan slot from NetEnt, including how much you can bet per spin and the top prize. Once you’ve checked out the table, it’s time to start spinning the reels of this fantastic game. You can play for free here on this page, or you can jump straight into real money play at an online casino.