Hell's Kitchen is a NetEnt slot for the chefs who like it raw, fast, and frantic and don't fear Gordon Ramsay.

When it comes to reality shows, one man is guaranteed to keep viewers glued to their screens at all times. He’s loud, he’s scary, he’s uncompromising – and he’s also an incredible chef. Whilst very few of us would ever want to work for Gordon Ramsay he’s been responsible for many hours of TV gold, and now that NetEnt has got in on the act and produced the Hell’s Kitchen slot machine, you can take on the world’s most notorious Chef de Cuisine without risking a single dressing down.

In fact, when you play Hell’s Kitchen online you need only risk a few dollars of your own cash if you like – which makes for a far more appealing prospect than jacking in your job to go and compete for a position in one of his restaurants. And if that seems like too much to ask, then why not try our demo game instead? That way you can play free Hell’s Kitchen slots for as long as you like – again, without incurring Gordon’s wrath even once…

We must admit that writing our Hell’s Kitchen slot machine review did make us rather hungry, though the fun and excitement served up on the reels kept our appetites at bay for quite some time.  Thanks to some impressive feature play and superb visuals and sound, every second on this mouth-watering game was a moment worth savouring, so think of our write-up as the hors d’oeuvre; demo play as your starter, and real money play as the main course. That way you’ll be ready to pitch in and enjoy every second to the absolute max when you start spinning for real cash.

Hell’s Kitchen Theme
NetEnt have opted for a subdued, late night feel on the reels with dark backgrounds playing host to some upmarket burger bar-style neon strip lighting used for the lower value symbols, and some dishes that are close to Gordon’s heart for the more valuable ones. Despite his love of fancy food, Ramsay famously enjoys a good burger as much as the Beef Wellington dish he’s always been obsessed with – and these appear alongside some sticky toffee pudding and a couple of cocktails, making for the ultimate foodies’ night out.

Betting Options
You can bet as little as $0.40 per spin on this online slot, though when researching our Hell’s Kitchen review, we quickly found ourselves acquiring a taste for it and couldn’t wait to try larger helpings – and with bets of up to $400 per spin on offer, there’s something on the menu for everyone.

Setting the level that suits you is simple: Just click on the pile of coins symbol directly to the left of the spin button, adjust to suit and then you’re ready to begin your feast.

Bonus Features
Activate the Ramsay’s Wild feature and between 5 and 7 wilds will appear anywhere on the grid. This is terrific fun as whilst it’s happening, knives are thrown onto the reels together with a suitably ripe series of comments from Gordon. It’s great to see that NetEnt have taken some time and effort to really involve him in the design of the game rather than simply badging the design up with his face and name – and the rest of the features operate in a similar spirit.

Land 3 or more scatters on reels 1, 2, 4 or 5 and you’ll be awarded up to 15 free spins. At this point the game really picks up, as the reels split into 2: One for the red team and one for the blue team. In case you haven’t seen it, this follows the format of the TV show – once again showing that NetEnt have thought this one through. You’re then asked to pick a team, which will fight a duel with the opposing team as the free spins play out – with additional multipliers and wilds put into the mix via a conveyor belt system at the bottom of the screen.

When this feature completes, you’re awarded wins from both teams, though if you pick the winning team, you’ll then trigger Gordon’s Bonus Game, which is a classic ‘pick me’-style round, letting you choose prizes of up to 5x your bet level and double or triple multipliers. It’s great to see a combat round of this nature, particularly in a NetEnt game, as many slots from this developer tend to focus heavily on features that are played in the base game.

Hell’s Kitchen Maximum Win
Top of Gordon’s à la carte menu is a $100,000 signature dish, which will enable you to eat out at your nearest Ramsay signature restaurants a good few times – and travel somewhere exotic to try a couple more if you fancy. We’d recommend the Pub & Grill at Caesar’s Palace – but then we’re a bit biased when it comes to finding excuses to go to Las Vegas…

Is Hell’s Kitchen Worth Playing and Who Should Play It?
If you’re a fan of Gordon then this is a must, though with a 5-reel, 3-row structure and a free spins bonus round triggered via 3 scatters it will appeal to anyone wanting a NetEnt experience with a slightly more traditional structure.

You’ll also enjoy it if you like head-to-head combat bonus rounds – most famously used in Playtech’s Rocky game. 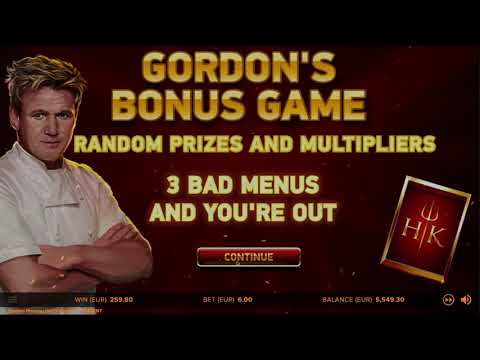 It’s easy to learn how to play Hell’s Kitchen. If you’ve played other basic slots with scatter and free spins rounds then you’ll understand the format pretty rapidly. Just select how much to bet and then spin the reels. Line up winning combinations of symbols and a cash prize will come your way. You could also start a Hell’s Kitchen bonus game at any point.

However, we can’t tell you how to win on Hell’s Kitchen, as it uses random number generators to determine what appears on the reels with each spin, meaning you simply don’t know when the next Hell’s Kitchen jackpot will pay out. However, you can be assured that nothing you have to do on this game to score a decent win will be as hard as cutting it in Gordon’s kitchen for real.

There’s a return to player figure of 96.07% on this game, which means that a typical $100 session would win you $96.07 in winnings. However, the Hell’s Kitchen RTP is only an average return, and what you can expect to actually win or lose will fluctuate considerably around this amount. The Hell’s Kitchen RTP of 96.07% is slightly above average, meaning it gives you a decent chance of winning when you play.

We’ve spent many painstaking hours putting the table below together. It lets you find out loads of facts about the game, including how much money you can bet per spin and what the game’s volatility is. Once you’ve looked at the table, it’s time to start playing this great game, either for free on this page, or for real money at an online casino.