Jimi Hendrix is a NetEnt slot for Voodoo Childs who miss Woodstock, flower power, and the guitar master himself.

When Netent snared the rights to make branded slots using images and sound from some of the top rock acts ever to grace a stage it signalled a huge leap forward for anyone who enjoyed great tunes whilst playing a great game at the same time. Their Jimi Hendrix slot machine remains the gold standard rock-themed game, featuring sound clips from the legendary axe-wielding superstar pitched against some mind-blowing game features that’ll keep you coming back for more any time you want some fast-paced excitement and the chance to win big.

Play Jimi Hendrix online and you’ll gain an exclusive backstage pass into a world of glamour, excitement and indulgence, all whilst potentially winning enough to go on a world tour of your own – except when you score a large cash prize on this game you won’t be responsible for entertaining anyone except yourself. However, before you get overly hyped-up and trash your own living room, it’s well worth getting some practice spins in. The Great Man himself didn’t get to be the best without spending plenty of time rehearsing, and you can do the same when you play free Jimi Hendrix slots on our fabulous demo game.

When we usually examine a game, we have to provide our own music, but when we wrote our Jimi Hendrix slot machine review there was no need! The game is stuffed full of Jimi’s best riffs, amplifying the excitement factor of each session like a 100-watt Marshall stack turned up to 11.

Jimi Hendrix Theme
The whole Jimi Hendrix slot machine is set against a gritty depiction of the Monument Valley national park with Jimi’s signature white Stratocaster thrown into the sand for good measure. Equally as important as the looks is the audio, and you’ll be treated to some of Hendrix’s biggest hits as you play.

On top of the musical clips, the game itself is a loving tribute to the Flower Power era with hearts, flowers, CND badges, vinyl discs, guitars and more on the reels – though when you score a win the symbols involved will explode into a lavish display of more flowers and animated symbols for extra effect. There are a handful of stock poker symbols used for lower value wins, but they’re well designed too.

Betting Options
The minimum bet at this slot is $0.20, which is reasonable, but might be a little high for some looking to play for micro-stakes. At the other end of the scale, the most that can be bet per spin is an impressive $200, which will be enough for even the biggest spending of slots players. As is nearly always the case, the more you bet, the more you could win.
Netent’s unique betting selection system is used here, so as well as picking coin values from $0.01 to $1, you can choose a bet level from 1 to 10. Your bet amount in cash is shown in the black bar at the bottom of the screen. The paylines at this slot are fixed, so you can’t change their number in order to adjust your bet amount.

Bonus Features
The first thing to say is that Hendrix himself is the wild symbol at this slot, meaning he can substitute for all other symbols, except the scatter, and help you make winning combinations. There’s no multiplier attached to him, but he’s still a really useful symbol.

The Red Guitar Re-spin takes place when you land 4 red guitar symbols anywhere on the reels. These symbols will stay put, becoming sticky whilst a re-spin takes place. As long as new red guitars appear, another re-spin will be awarded, with the appearance of more and more red guitars making it far easier to score large wins.

Finally, there’s a good old fashioned scatter feature, that we managed to trigger a number of times when researching our Jimi Hendrix review – although the Pick and Click game it takes you to is far more interesting than the usual free spins round you can expect.

Firstly, you’ll click on various speaker cabinets to reveal different features, and when you match up 3, you’ll know which feature you’ve been awarded:

Three coin win symbols will award you between 8x and 30x your bet value in a simple, one-off payout. Three Crosstown Traffic symbols wins you 6 free spins, with different, special Wild Reels appearing for each spin.

Three Purple Haze symbols and you’ll get even more free spins, with up to 12 awarded, during which any 10, J, Q, K or A symbols turn wild. Finally, The Little Wing feature also awards up to 12 free spins, but this time between 3 and 5 sticky wilds are added for extra chances to win.

Jimi Hendrix Maximum Win
There’s an $80,000 jackpot waiting for you if you reach the pinnacle of this game. When it comes to the maximum win per payline during the base game, you’ll find that the most you can win is 400x your coin value, multiplied by your level. This means that those playing at the highest stakes could win $4,000 per payline. However, you can, of course, win multiple prizes on a single spin.

Is Jimi Hendrix Worth Playing and Who Should Play It?
This is a high-spec game even by Netent’s standards, and consequently we think it’s well worth playing. The graphics and particularly the audio are both great, making every spin of the reels loads of fun, while the prizes on offer can be huge. The biggest reason to play this slot though? It’s the numerous bonus features, which keep excitement levels high all the time.

For those who love Hendrix’s music or are curious about hearing the very best from his catalogue, it’s a must-play slot. Those who love games with lots of features and tombola style ‘pick me’ rounds should also really enjoy spinning the reels. Those who are simply out to find the slots with high RTPs will also be happy, as this slot’s return-to-player is much higher than the average. 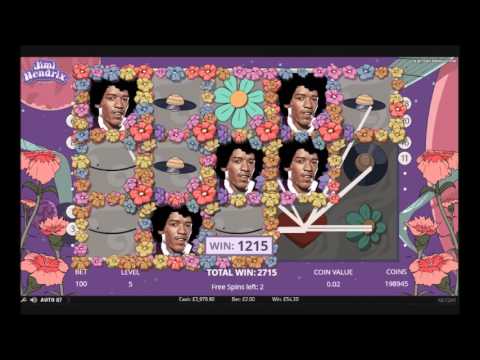 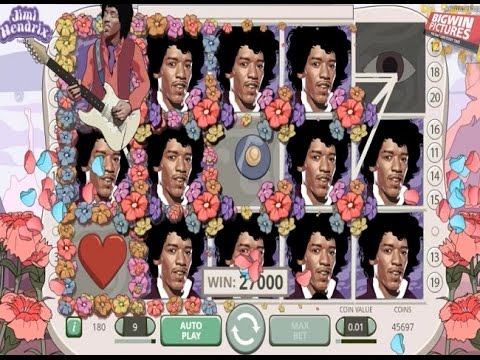 Once you’ve set your coin and bet levels, be sure to check your total bet per spin in the box to the left-hand side. From then on, it’s very easy to know how to play Jimi Hendrix : Just hit the green spin button repeatedly or set autoplay options using the green semi-rectangular button situated right beside it. To win an instant cash prize, just get two/three identical symbols next to each other on a payline, starting from the first reel. Activate the Jimi Hendrix bonus game by getting three or more scatters on the reels.

If you’d like to know how to win on Jimi Hendrix , then that’s a little more involved. You’ll need to keep playing, triggering bonus rounds and trying all the features as many times as it takes, as the outcome of each spin is about as random as you can get. Your next Jimi Hendrix jackpot is, therefore, as likely to appear on your first spin as it is on your hundredth.

There’s a 96.90% return-to-player figure on Jimi Hendrix , so every $100 you bet will – in a typical session – pay out winnings of $96.90. The Jimi Hendrix RTP figure should, however, only be used as a guide as it represents a mean average rather than what you can expect to win or lose yourself in real-life gaming sessions. There’s no way to alter the Jimmy Hendrix RTP.

If you want to make an informed decision about whether you ‘d like to try this game, we’ve put together a table which lists which all the most important points about the Jimi Hendrix slot. If the game looks good to you, just load it up and play for free here on this site, or alternatively head to an online casino and play for real money.