Narcos is a NetEnt slot for the cartel members who like their slots lawless, dangerous and exciting. This 5×3 slot comes with  243 paylines & 96.23% RTP

Did you watch the hit netent series Narcos , about the DEA tracking down the notorious drug lord Pablo Escobar? If so, this is a slot you absolutely have to try out, as it brings the excitement of the series to online casinos! Great graphics, big prizes and many different bonus features combine to make this one of the best online slots netent has ever produced.

On this page, we’re going to explain everything you need to know about the fantastic Narcos slot machine, plus we’ll let you play free Narcos slots, to find out if you enjoy playing. If you do like the game, you can head then to a NetEnt casino and play Narcos online for real money. Hopefully you’ll win the huge jackpot when you do!

So, what are we going to tell you in this Narcos slot machine review? Well, you’ll find out everything from how to play the bonus features, through to how much money you can bet, plus everything in between. So, if you want a complete overview of this game before you start spinning the reels, keep on reading our detailed Narcos slot machine review…

This online slot is based on the amazing netent series of the same name. It follows two DEA operatives in Colombia as they try to track down Pablo Escobar, the most notorious drug baron the world has ever known. As you can imagine, there’s plenty of violence, which is replicated on the reels. You’ll also find a really cool 80s vibe to this slot, which really adds a lot to the overall enjoyment of the game.

On the reels, you’ll find the main stars, namely Javier Peña, Steve Murphy, Gonzalo Rodriguez Gacha, Connie Murphy and, of course, Pablo Escobar himself. You’ll also find a flamingo and a small plane. The lower value symbols are playing card values, however they look fantastic, as they’re surrounded by items Escobar might have close to him, like piles of money and guns.

As with many netent slots (like Divine Fortune), there are two fields to change in order to alter your bet. You can click the plus and minus arrows either side of both the “Level” field and the “Coin Value” field. The value of your bet is shown in the black band at the bottom of the screen, and is worked out by multiplying your coin value by 20 (the number of paylines), and then multiplying that by your level. When you get a prize, the value on the paytable will be multiplied by your level, and then by your coin value. The resulting figure will be your prize. Your cash prize is also shown in the black bar underneath the reels.

Firstly, you’ll find that this slot has a wild symbol, which is the DEA badge. The fact that it’s a wild symbol means that it can substitute for all symbols except the Free Spins and Pablo Escobar symbols, allowing it to help you create winning combinations. It’s not a normal wild though, as it’s a Walking Wild. This means that it will remain on the reels after being part of a winning combination, but will move one space to the left. It will remain on the reels, moving one place to the left every turn, for as long as it keeps being part of a winning combination, or until it falls off the left of the reels.

Next up, there’s a random bonus called the Drive-By feature. This can activate at any time and sees guns fired at the reels, flipping some symbols and causing them to turn wild. What’s more, they’ll be Walking Wild symbols, meaning that they could contribute to multiple winning combinations.

Then there are the two main bonus games, the first of which is called the Locked Up feature. This starts when you manage to get three Pablo symbols on the same row during the base game. The symbols starting the feature are moved into a bunch and each Pablo symbol will have a random prize attached to it. All other symbols disappear.

You’ll then get three free spins, with only Pablo symbols, briefcase symbols and blank spaces on the reels. Get a bunch of three or more Pablo symbols to form a winning cluster. The golden briefcase symbol landing next to a winning cluster will provide a bonus to that cluster, such as a multiplier, whenever it lands, or the value of the prize attached to the briefcase will be boosted. Whenever a Pablo or briefcase symbol lands, your number of free spins resets to three. At the end of the bonus game, all values are added up to reveal your prize.

The other main bonus game is the free spins feature, which starts when you get three Free Spins symbols anywhere on reels one, three and five. You’ll receive 10 free spins and on every spin there’s a chance that one or more of the higher value symbols will turn wild. If there are any Walking Wilds on the reels when the feature ends, additional free spins will be awarded until there are no more Walking Wilds on the reels.

So, what is the most that can be won while playing Narcos ? Well, on the paytable, the most that can be won is 300x your bet level, with that figure being multiplied by your coin value. This means that those betting at the highest stakes can win $10,000 from a single combination. This isn’t the jackpot though, as you can win far more than this, as you can get multiple wins on every spin, thanks to this slot’s 243 different ways to win. The Locked Up feature can also lead to some huge prizes as well.

Is the Narcos Slot Machine Worth Playing and Who Should Play It?

Wondering whether to play Narcos ? If so, the answer is a categorical “yes”, as this slot is one of the best ever created by netent. It quite simply offers everything a slots player could want, from bright and bold graphics, through to some huge prizes. The bonus features are the main reason to play this slot though, as they’re action-packed and exciting – exactly what you want from any online slot’s bonus features.

This game is aimed squarely at those who have enjoyed watching the great netent TV series of the same name. Not watched it? Don’t worry too much, as you’ll still love this slot’s gameplay. Those looking for something simple and sedate probably won’t be too impressed with the Narcos slot though. It’s a medium to high volatility slot, so those playing should be prepared to win or lose money quickly, as wins are sporadic, but can be very large. 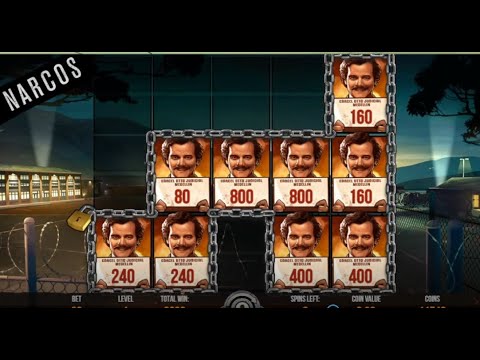 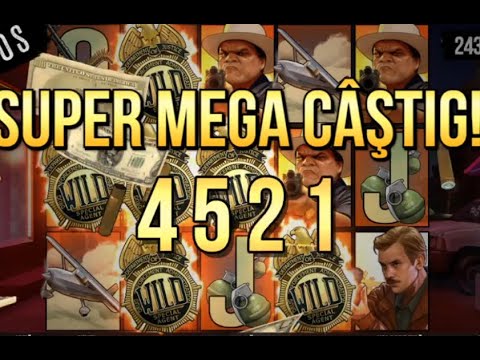 Looking to find out how to play Narcos ? Well, firstly you’ll need to choose how much to bet. Done this? If so, just hit the cylinder and get the reels spinning! You will then win a prize if you get three or more identical symbols or wild symbols on consecutive reels, starting from the first reel. You could also start a fantastic Narcos bonus game – there are two main ones on offer, as well as a random bonus too. Win a prize and you’ll find it added to your casino balance straightaway.

Narcos , like all other slots, is based entirely on luck – those looking to find out how to win on Narcos won’t find any ways to boost their chances of winning the Narcos jackpot, or any other prize. Every spin of this slot is controlled by a random number generator, which is a highly complex piece of software that can’t be cheated.

According to the netent website, the Narcos RTP is a rather impressive 96.23%. This is higher than the average RTP at online slots, which is around 95.50%. RTP stands for return-to-player and is a figure telling you how much money, on average, a slot machine will pay back over an extremely long time. So, over millions of spins, the Narcos slot should pay back 96.23% of all money spent on it. There’s no way to alter the Narcos RTP.

Want to quickly find out how much you can win playing this slot? Or perhaps you want to see this slot’s volatility? If so, you can find the information you’re looking for, as well as much more, in the handy table we’ve created. Found what you’re looking for? Then it’s time to load the free game on this page and see if you enjoy playing the Narcos slot! If you do, you can head to a casino we recommend and play the game for real money.