Jumanji is a NetEnt slot for fans of the 90s adventure, with its wild, jungle-themed, dangerous, unpredictable feel.

Do you dare roll the dice and play Jumanji , the fantastic online slot from Netent? This is a game that brings all the excitement of the movie and adds in the chance to win some seriously impressive prizes. With loads of bonus games and some fantastic graphics, this is a game that slot players should love, so why not learn more about it by reading through our Jumanji slot review?

We’ve not only written a detailed Jumanji review though, as we’ve also given you the chance to play free Jumanji slots as well. These free slots have all the features of the real money game, so you can play and find out if this is the perfect slot for you. If it is, you can then play Jumanji online at one of the top online casinos we recommend to our readers.

In this Jumanji slot machine review, we’ll take you through everything you need to know, from how much you can bet, all the way through to how to play the different bonus games. Once you’ve finished reading this Jumanji review, you’ll know exactly how to play this superb game from Netent!

Jumanji Theme
This slot is based on the fantastic movie of the same name, which sees two children playing a mystical board game, which unleashes all manner of animals and plants into their neighborhood. You’ll find a trail surrounding the reels, which comes into play during the main bonus, while the reels themselves are constructed from old wood, just like the game’s box.

On the reels, you find many of the creatures from the movie, namely lions, rhinos, crocodiles and pelicans. These all animate when they are part of a winning combination. The lower value symbols are playing card values, and despite being generic, they look great, as Netent have designed them to look like the font used in the Jumanji logo.

Betting Options
The minimum bet at the Jumanji online slot is just $0.10, which is fantastic news for those who like to play for low stakes. High stakes players will also be happy as well, as the maximum bet amount is $200. As is pretty much always the case, the more money you bet, the more money you could win. Don’t bet more than you can afford to lose though.

To adjust your bet amount, you’ll need to alter two fields – “Level” and “Coin Value.” You do this simply by clicking the plus and minus arrows either side of them. If you know you want to play for the highest stakes, just click the “Max Bet” button. You’ll be able to see how much money you’re betting in cash by looking at the black strip right at the bottom of the playing screen.

Bonus Features
Jumanji has an amazing nine different bonus features for you to enjoy, which should please those who like their slots to come with loads of action and excitement. The first thing to mention is the wild symbol though, which can substitute for all other symbols except the scatter. This makes it exceptionally useful, so you’ll want to see it spinning into view as often as possible.

Another interesting feature is the fact that you can be paid multiple times for a single winning combination. For example, if you get five-of-a-kind, you’ll also be paid the four-of-a-kind prize, as well as the prize for three-of-a-kind too.

You’ll then find that there are four random bonus features, which can start at any time. The first is called Sticky Vines, and this activates after a winning spin. All winning symbols are held in place, along with all wild symbols, as the reels respin, giving you the chance to spin in another winning combination.

Next up, there’s the Monsoon Wilds feature, which can activate before the reels stop spinning. Quite simply, it turns one or two reels completely wild, giving you a much better chance of spinning in a win. The fifth reel can’t be the only reel covered by wilds – if you get wilds on that reel, you’ll also be guaranteed to get them covering another reel too.

The next random feature found at the Jumanji online slot is Monkey Mayhem. You’ll win any prizes you manage to spin into view, before monkeys then swap symbols around, creating another winning combination.

The final random feature is Wild Stampede, which sees a crash of rhinos charging across the reels, dropping wild symbols as they go. They’ll leave at least four wild symbols on the reels, with the maximum number being nine.

If you get three or more scatters on the reels, you’ll be taken to the Jumanji board, where you’ll select a playing piece (the one you choose has absolutely no influence on the game), then throw dice and move around. Start the bonus with three scatters and you’ll receive six rolls, while start it with four scatters and you’ll get seven rolls. You’ll receive eight rolls if you start the bonus with five scatters.

As you move around the board, you can win extra free spins, cash prizes or start a free spins bonus. You can also land on the Mystery Feature, which sees a carousel filled with prizes spinning around. You’ll win the prize that it lands on.

The big money comes when you land on one of the two highlighted spaces in each corner of the board. Doing so will see you start the relevant free spins bonus. Get the Vines Free Spins and you’ll get 10 free spins, with the Sticky Vines activating after every winning spin. What’s more, any wild symbol that spins into view will remain stuck to the reels for the entire free spins bonus.

Then there’s the Monsoon Free Spins. You’ll get seven free spins, and on every spin of the reels you’ll find one or two reels turning completely wild. The same reels cannot be chosen as wild reels on consecutive spins.

Finally, there’s the Stampede Free Spins. You’ll receive five free spins during this free spins bonus round, and every free spin will see the rhinos stampeding over the reels, turning four to nine positions on the reels wild.

Once you have finished a free spins bonus round, you’ll return back to the board and continue rolling the dice, giving you the chance to win more prizes and possibly even access another free spins bonus, although you won’t be able to start any free spins bonuses you’ve already played during that bonus. When you run out of spins, the total value of everything you’ve won will be paid to you.

Jumanji ’s Maximum Win
The maximum prize per payline at this slot is 140x your level, multiplied by your coin size. This translates to $2,800 for those betting at the highest stakes. This is won when you get five lions across a payline. Don’t forget that you’ll also win the prizes for four-of-a-kind and three-of-a-kind too though, which are 20x and 6x respectively. Because this slot has multiple paylines, you can get many wins on a single spin, pushing the maximum win up even further, plus you can also win a huge amount during the main bonus game. Overall, it’s possible to win tens of thousands when you play this game.

Is Jumanji Worth Playing and Who Should Play It?
Jumanji is a slot that’s definitely worth playing, for many different reasons. The theme is an incredibly exciting one, even if you’ve never seen the movie before, while the number of bonus features is staggering. You’ll also find that the prizes can be exceptionally large, plus the great graphics really immerse you in the gameplay.

This slot is perfect for anyone looking for a game with loads of bonus features – those at the other end of the scale though, who prefer simpler slots, probably won’t like this game. Jumanji is a low volatility slot, making it perfect for those who like regular, smaller wins to spin into view. Those looking for something a little more volatile should look elsewhere though. 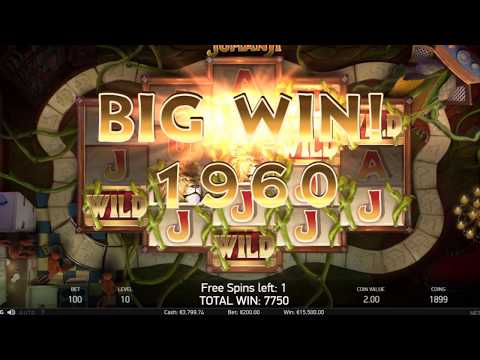 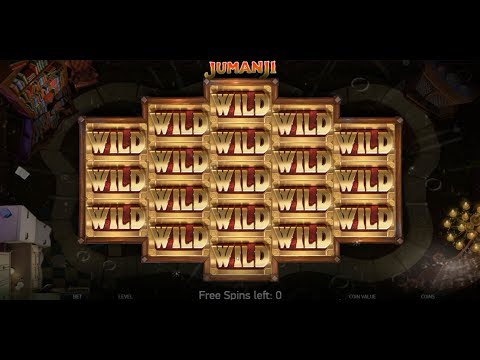 Learning how to play Jumanji is really simple. You start by choosing how much money to bet, before then spinning the reels. You’ll then win a prize if you manage to get three or more identical symbols lined up on a payline, starting from the first reel. You could also start the Jumanji bonus game, which can in turn lead to you playing one of the slot’s fantastic free spins bonuses. Any money you manage to win while playing will be added to your casino balance automatically.

Anyone looking for how to win on Jumanji will be disappointed, as there is no way to guarantee you’ll win the Jumanji jackpot, or any other prize. It’s not even possible to increase the RTP of the game by a tiny amount. Instead of trying to work out how to cheat the game, it’s better to accept the game is random, sit back and enjoy yourself while you’re playing.

The Jumanji RTP is 96.33%, which is fantastic. This is because it is considerably higher than the average for an online slot, meaning it gives you a higher chance of winning money than the majority of other slots. The Jumanji RTP of 96.33% means that, over an exceptionally long period of time, the game will pay back 96.33% of everything spent on it. The return-to-player is not a guarantee that you’ll win this amount though – some will manage to win thousands, meaning others have to lose in order to balance things out.

Looking to find out what the RTP of Jumanji is? Or perhaps you’re interested in finding out how much you can win while you’re playing? You’ll quickly be able to find the answers to these questions, as well as much more, when you look at the handy table we’ve created. You can then play the Jumanji slot for free, here on this page. If you enjoy playing, you’ll then find that it’s available to play for real money at many of our recommended online casinos.