Jack Hammer 2 is a NetEnt slot where gangsters and cops collide in this cartoony, retro, Mafia-themed crimefest.

Grand City is under threat again and only one man can save it- Jack Hammer! This handsome private detective and avid crime-fighter with the razor-sharp brain and nerves of steel has what it takes to make Grand City a place all can live in peace and will fight the efforts of the evil Don Crabby to turn Grand City into his private fiefdom. Sign up for the Jack Hammer 2 slots from Netent now and fight crime, save damsels in distress, and have some fun into the bargain! This comic-themed slot sure is the real deal and will make a nice guy out of you yet! Make it spin now!

Play Jack Hammer 2 slots online and for free too. Online play is made available on all internet-enabled devices, from desktops to laptops and smartphones. Downloads are not required to play and the gameplay is sweet as sugar and swifter than greased lightning! Play Jack Hammer 2 slot machine online now and in any online casino you want to get frisky in. Once you have an active account at an online casino, you are free to start up this slot at any time and play enough to make mighty Jack Hammer proud of you!

Free Jack Hammer 2 slots await all bettors. Yes, there’s a free mode of this very lovable slot and it is the very definition of awesomeness! In this free mode version, players can dive into the addictive world of Grand City and help Jack Hammer keep law and order in a world that’s nearly running amok! Once the free mode gets a little boring, players can ladle lots more excitement on their plate by playing for real money. Real money play translates to real money wins and losses, with players potentially being able to score wins they can wave in the face of the evil Don Crabby and make him insanely jealous! Time to get it rocking and play the Jack Hammer 2 slots on the double!

A little while ago, Netent came out with the wildly popular Jack Hammer vs Evil Dr. Wutten slot. The game was so good that many of this Jack Hammer 2 slot review team spent most of their weekends spinning it up like they were being paid in gold bullion! Given the success of this online slot machine, Netent decided to release a successor and this is the Jack Hammer 2 Fishy Business slot machine.

This slot is much the same as in the earlier installment, though the cast of characters has changed a little. There are 5 reels and a rather incredible 99 fixed paylines here, with the onscreen characters consisting of Jack Hammer himself, a lady in distress, and an arch-villain with a claw hand by the name of Don Crabby. Pretty he ain’t!

There’s no confusion about the characters in play since a short animated clip introduces them all once players click on this online slot machine. The graphics used would be rather familiar to fans of the first Jack Hammer slot, with the game looking like an old school comic book. The setting here shows a nighttime scene of Grand City, and the graphics are both colorful and endearing.

Icons consist of two different images of Jack Hammer, a lady named Pearl, Don Crabby and his goons. These are the high-value icons. Icons on lower value consist of images showing an old microphone, a motorboat, a gun case, a barrel of fish, and a dock scene. A wild and scatter show up too, with the first being able to take the place of all icons save for the latter.

Audio effects here consist of an orchestral composition that plays when players are winning, a retro tune that is heard during the Free Spins Bonus, and some natural sounds that make the player think of a deserted dock at night. Two bonuses are provided, which are the Sticky Win feature and the Free Spin feature, both of which make the world taste much better!

From what we can see here, the Jack Hammer 2 slots ticks just about every box, from sweet graphics to playability. It has a nice setup of bonuses, plays flawlessly on any medium, and is reasonably unique. This Jack Hammer slot machine review team had nothing to complain about and would recommend this slot to anyone that wants a change of scenery and some Jack Hammer-directed action! 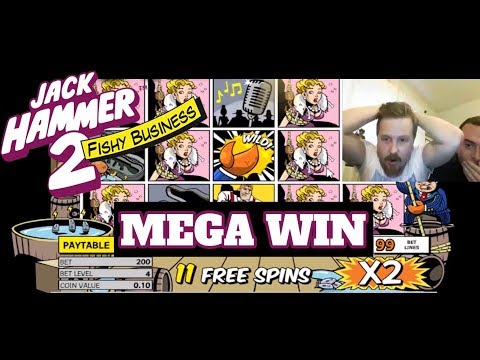 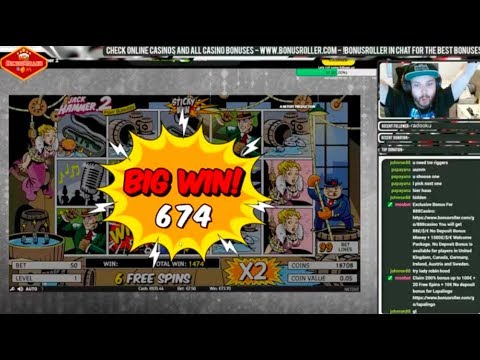 If there ever was a simple slot it is the Jack Hammer 2 jackpot slots! Yes, this slot is a spicy dream to play, with retro graphics and audio effects that change in line with the gameplay action. Things certainly don’t get any better than that! Anyone looking for how to play Jack Hammer 2 jackpot slots needs to take a minute or two and study the gameplay buttons at the bottom of the screen. These are mostly colored green and include the indomitable duo of the Bet Max and Autoplay buttons.

Wins on this slot machine happen when players string together enough identical icons to form a winning combo, which players desirous of knowing how to win on Jack Hammer 2 slots need to be cognizant of. The animation and audio effects that activate when wins are formed incidentally provide a great incentive for players to fill up the reels with identical icons. Do that and Jack Hammer himself could shake your hand if that was possible!

Now the Jack Hammer 2 slots have a couple of bonuses. The first of these is the Sticky Win feature and is activated when players form a winning combo. Here, all icons that make up the winning combo are frozen in place, with the reels spinning up again. If a wild icon or an icon that is identical to that in the winning combo is landed during the awarded respin, these are frozen in place and another respin is awarded. Respins keep on getting awarded so long as a matching icon or wild is landed, with the whole thing ending when no matching icon or wild appears during a respin, at which point a payout is made.

The next Jack Hammer 2 bonus is the Free Spins round. To trigger this players are required to land 5 of the scatter icons on any reel location. 5, 6, 7, and 8 scatters landed gets players 10, 13, 16, and 20 free spins respectively. During this bonus game, both extra wild and standard wild icons can appear on the reels. Also, all wins are doubled in value by default, while the Sticky Win bonus can be activated. Even better, up to 40 extra free spins are up for grabs here, accessible when players land and re-land enough scatter icons.

Readers will find all important statistics and features of the Jack Hammer 2 slot machine listed below: