Justice League is a Playtech slot where popular heroes and heroines collide in this ab-flexing, boomerang-tossing, superhero mashup.

DC Comics is a very known name, with their comics and comic book superheroes enjoying very widespread acceptance. A few of these heroes form the Justice League and are known for going about dealing out justice and saving mankind from itself and other dangers!

Now, Playtech has put together the Justice League online slot that is themed after the comic book and movie of the same name. This is a licensed production that features the Flash, Superman, Batman, Cyborg, Aquaman and Wonder Woman, with all working together on the reels to serve up some of the most high-octane entertainment ever!

The Justice League online slot from Playtech takes place across 5 reels and 40 paylines, though this is a tad small to accommodate the egos of no less than 6 of the most powerful superheroes mankind has ever known! Each superhero on the screen has its own special Free Spins mode and as if that is not enough there are 4 progressive jackpots in place, with varied world-ending prizes being up for grabs!

If this is the kind of slot you crave, then you can easily play free Justice League slots on this site. Should the action prove irresistible, you can opt to play Justice League slots online and for real money at any well-regarded online casino. Play and spin up the reels in company with your favorite superhero and Lady Luck might get so intimidated she has no option than to freely bless you!

Keep on reading and you will find more than enough pertinent information on the Justice League online slot machine to write a volume!

Here in this part of the Justice League slot review, we will take a good look at some gameplay aspects. The theme will be examined, as well as everything else from the bonuses to the bet sizes.

Once you are through reading this part of our Justice League slot machine review, you should be able to pass an exam on it if that ever takes place!

Justice League Theme
The Justice League online slot is themed after the comic book and movie of the same name and features the same cast of characters. These characters show up on a screen the likes of which we have not seen before, with a deserted and forbidding landscape serving as the background.

On the reels are the aforesaid 6 superheroes plus their logos. These superhero icons can land on the reels while stacked up to 4 high for enhanced wins. For audio, this slot uses the eponymous movie soundtrack and it sure does sound awesome.

Overall, the audio and visuals here are the top-class stuff one would expect and while superhero slots are by no means unique, the Justice League slots do great justice to an oft overused theme!

Betting Options
For a slot about superheroes, the Justice League sure does not disappoint when it comes to the betting range! Folks who want to play this online slot machine can therefore, wager from 0.40 to 2,000.00 coins per spin. This means that even the most tight-fisted low roller, as well as the most extravagant high roller have their peculiarities catered to.

Bet adjustment is one of the easiest things to do and is accomplished courtesy of the + and – buttons that are to the bottom left of the screen. Additionally, an Autoplay mode is enabled and this can be put to use setting up scores and hundreds of consecutive spins.

Bonus Features
Superhero slots deserve no less than super-packed bonuses, a fact that Playtech seems to be fully aware of! To that effect, it has loaded up its Justice League slot machine with bonuses fit for a king on the day of his coronation! The first of these is the randomly activated Super Hero Respin feature that results in a respin being granted during base gameplay, during which a particular superhero icon is made wild. This feature can be re-triggered a maximum of 5 times, which means the luckiest of players can potentially make all superhero icons wild.

The main bonus round is however a Free Spins feature that is tailored to the characteristics and abilities of each superhero. The more the Free Spins bonus round is played, the more features are unlocked, and the greater will be the potential wins. The Free Spins round here has 6 modes. The first is the Flash Free Games where players are awarded 15 free games, with up to 30 extra free games being accessible when this feature is re-triggered by at least 2 scatter icons. During this Free Game, a superhero that lands in the feature frame will change all its icons on the screen into Wilds.

The Wonder Woman Free Games feature on the other hand gets players 7 free games. 14 extra free games are accessible by landing enough scatter icons and landing a superhero icon in the feature frame changes all its copies to wilds. Up to 5 feature frames appear in this bonus per spin. The Superman Free Games feature brings with it 5 free spins and like in the others a superhero icon that appears in the feature frame will change all other instances of that icon on the screen into Wilds. Also, a colossal 2×2 feature frame makes an appearance here during the awarded free spins.

The last Free Games feature is the Batman Free Games. 2 free spins are awarded, with any superhero icon that appears in the feature frame transforming all other superhero icons into wilds! And less lets not forget, the Justice League slot machine has one of 4 progressive jackpots -the Mini, Minor, Major, and Grand Jackpot. These jackpots form part of the DC Superheroes Progressive Jackpot system and are randomly activated.

Justice League Maximum Win
The maximum wins to be gained in the Justice League slot come from the progressive jackpots, with the Grand Jackpot being the highest paying. There’s really no limit to what can be won here.

Is Justice League Online Slot Worth Playing And Who Should Play It?
The Justice League online slot machine is a cut above the rest and apart from dazzling graphics is fun to play. Even better it hosts a progressive jackpot where the most gargantuan wins are totally viable.

This slot is worth playing by all types of bettors, from low rollers to folks who like to bet big, as well as those who dream of triggering a progressive jackpot at least once in their lives! Folks who love DC Comics and its superheroes will likely find the Justice League to be a total blast they might not be able to get enough of! 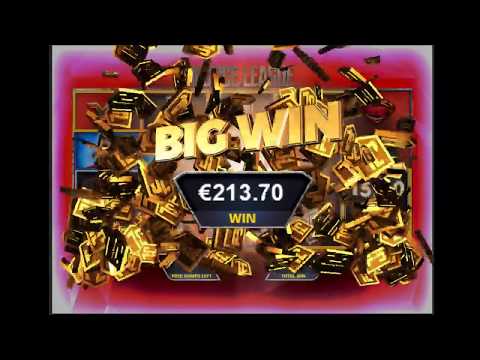 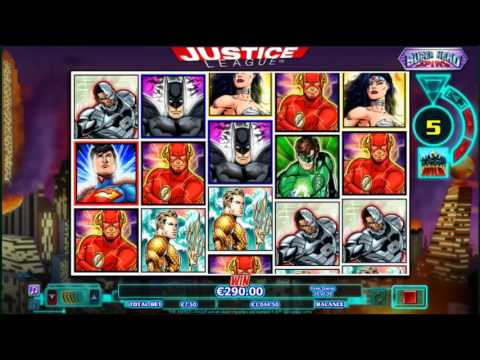 Learning how to play Justice League jackpot slots is a total no-brainer! The gameplay is super-easy and the gameplay buttons on the bottom of the screen are clearly labeled and just about beg you to click them! Before commencing play, be sure to check out the paytable, find out the worth of each icon, and learn exactly what happens during each bonus game, plus how they are to be triggered. Only then should you use the + and – buttons to choose your bet size, before clicking the Spin button and potentially altering your destiny for the better!

We however have no tips to offer on how to win on Justice League slots. See, all online slots make use of a Random Number Generator and this is set up to assure the most random outcome from spin to spin. What this means is that each spin is an independent event that will have no effect on any other spin. Thus, trying to predict the results of a spin is a fool´s errand.

Wins and losses in the Justice League jackpot slot are due to one thing only- luck. So, if you intend to win big in the featured Justice League bonus game or want to set up consecutive winning spins, the only thing to be done is to get Lady Luck on your side and quickly too!

The RTP or return-to-player refers to the percentage of all bets that players will get back after a very large number of spins. The RTP is determined after a conscientious simulation of millions and sometimes billions of spins, with the average payout of all these spins being calculated.

The table below lists all the important facts and features of the Justice League online slot machine. Consult it when you can and you will learn all you care to.