Archer is a Playtech slot has a distinctly Medieval English theme with cunning Kings, conniving Queens and suspicious squires.

Head deep into Sherwood Forest and join up with Robin Hood and his Merry Men in this slot from Playtech, which offers 243 ways to win and an impressively sized jackpot. We know it’s not the best-looking slot you’ve ever seen, however looks aren’t everything in the world of slots, and we know you’ll be really impressed with the slot’s slick and exciting gameplay.

On this page, we’re going to give you a full rundown of the Archer slot machine, plus you’ll be able to play free Archer slots. This will give you the chance to test out the game for free, to see if it’s the right choice for you. If it is, you can head over to an online casino and play for real money – you could win the huge Archer jackpot when you do!

Our Archer review is designed to answer pretty much every question you could have about this slot from Playtech, from how much you can win, through to how the different bonus features work. So, take a read of our Archer slot review before you start spinning the reels.

Archer Theme
As you’ve probably guessed by the name, this game is about an Archer . He’s not just any Archer though: he’s Robin Hood, the most famous Archer of all time. You’ll join him and his Merry Men as they battle the evil Sheriff of Nottingham, trying to steal from the rich and give to the poor. The graphics aren’t the best around, however the music is great, and you’ll love the fanfare every time you spin in a win.

On the reels, you’ll find Robin Hood, Maid Marion, Friar Tuck and the Sheriff of Nottingham. There’s also a huge pile of coins, which is the wild symbol, and a pair of crossed arrows, which is the game’s scatter, as well as a helmet. All the other symbols are playing card values, which have a certain medieval look to them, but don’t really add much to the overall look and feel of the game.

Betting Options
The minimum bet at the Archer slot is $0.25, while the most that can be bet on any spin is an absolutely huge $1,250, which will be enough for even the biggest spending players. As experienced slot players will know, the more money you bet, the bigger the potential prizes will be, however larger bets also lead to higher levels of risk.

While the slot has 243 ways to win, you bet like it’s a 25-payline slot. Your total bet is your coin value multiplied by your multiplier, with the result multiplied by 25. You can change your bet size by pressing the plus and minus buttons underneath the reels, and you’ll be able to see your total bet amount to the left of the Autoplay button.

Bonus Features
Next, we come to the bonus features at this online slot. Firstly, as already mentioned, you’ll find that there’s a wild symbol, represented by the pile of gold. This can substitute for all other symbols except the scatter. It appears on the second, third and fourth reels.

Then there’s the Expand & Split feature. When a symbol with an arrow border is part of a winning combination, plus at least one scatter is on the reels, this feature will start. It sees the symbol with the arrow border being hit by a well-aimed arrow, causing the symbol to expand to cover its entire reel. It doesn’t remove other symbols when it does this though, instead splitting them and sharing their positions, leaving you with two symbols in the same place. After the symbol expands and splits, you’ll find out if you’ve managed to land any other wins.

Finally, if you get three or more scatter symbols anywhere on the reels, you’ll win an instant cash prize, plus you’ll be given seven free spins. You can win more free spins by getting another three or more scatters on the reels while the feature is active, and there’s no limit to the number of times you can retrigger free spins during this feature. During the free spins, all symbols with an arrow border in a winning combination will expand and split, regardless of whether a scatter is on the reels or not.

Archer ’s Maximum Win
The top prize per payline at this online slot is 1,500x your coin value, then multiplied by your chosen multiplier. This means that those betting the maximum at this slot will find themselves winning $75,000 if they manage to get a Robin Hood symbol on every reel. However, it’s actually possible to win even more than this, as the game has 243 ways to win, meaning you can get multiple winning combinations on the same spin. When activated, the Expand & Split feature only adds to the number of ways to win at this slot.

Is Archer Worth Playing and Who Should Play It?
If you’re prepared to look past the basic graphics, Archer is definitely a slot that’s worth playing, as it offers a huge amount of enjoyment and excitement. The Expand & Split feature regularly kicks into action, while the free spins, while simple, also add another layer of fun to the game. The prizes are the main reason to play this slot though, as you could win a huge jackpot if you’re lucky!
This slot is best for those who appreciate a game with great gameplay, and don’t pay much attention to the graphics on display. It’s also great for those who don’t like a game to be too complex, but still want a couple of simple bonus features to be offered. With a medium volatility, it should pay out reasonably regularly, with the prizes being a mix of small and large ones. This makes it suitable for those with casino account balances of all sizes. 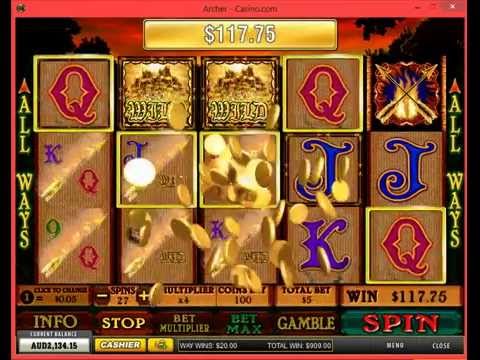 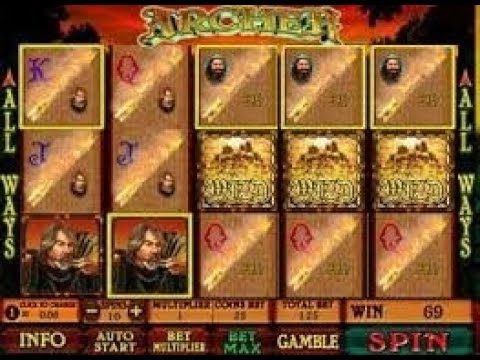 Learning how to play the Archer online slot is easy. Firstly, choose your bet size by adjusting the “Coin Value” and “Multiplier” fields, and then press the “Spin” button to get the reels moving. When they stop, you’ll win a prize if you get a winning combination on the reels – these are all shown on the game’s paytable. If you’re lucky, you could start the Archer bonus game, or you could even manage to win the huge Archer jackpot!

Unfortunately, those looking for how to win on Archer will not find anything, as the game is based entirely on chance. The random number generator makes sure every spin is completely random, and there’s nothing you can do to influence it, regardless of what anyone says. There is also no way to boost the RTP of this game.

The return-to-player of a slot tells you how much money the slot will pay back over an exceptionally long period of time. The average in the world of online slots is around 95.50%, however the Archer RTP is just 94.99%, meaning you have a slightly lower than average chance of winning money when you play. The Archer RTP certainly isn’t anywhere near the lowest we’ve seen at an online slot machine though.

We’ve put a table together showing some of the most important facts and figures about the Archer online slot, such as how much money you can win and what the game’s volatility is. Once you’ve taken in these facts and figures, you should load up the free Archer slot machine and see if this Playtech game is what you’re looking for. If it is, you should then head to an online casino and play it for real money – you might win the Archer jackpot when you do!