Age of the Gods slot

Age of the Gods is a Playtech slot for Ancient Greek buffs who'll love its Spartan, classical, warlike imagery and themes.

Play Age of the Gods Slots Online for Free

Age of the Gods is Playtech’s flagship progressive jackpot slot. With prizes that can be worth over $1 million, it’s no surprise to find that this slot is massively popular with casino players, all looking to scoop the game’s top prize. A fun theme and enjoyable gameplay, along with five different bonus games, only add to this game’s massive popularity.

Age of the Gods Slot Review

Age of the Gods Theme
This slot is based on famous Greek gods and heroes, such as Zeus, Athena and Hercules. Behind the reels you’ll see an ethereal landscape, possibly representing Mount Olympus, the legendary home of the gods. The reels themselves are gold, as are the buttons below, adding a sense of majesty to the game’s look and feel. Atmospheric music plays throughout your time spinning the reels.

On the reels, you’ll find a number of gods from ancient Greece, such as Zeus, Poseidon and Ares. There’s also a warrior’s helmet, as well as Q, K and A symbols, which are commonly used as lower paying symbols at slot machines. The two special symbols are the wild and the Age of the Gods logo – we’ll look at them more closely later in this review.

Betting Options
The minimum bet is $0.01 per payline, and with the slot having 20 fixed paylines, this means that the minimum total bet is $0.20. The most you can bet per spin at this slot is $2 per payline, or $40 overall. This low maximum bet won’t do much to attract the higher stakes players to this online slot. Think about how much you bet, as the higher your bet, the better your chances are of starting the progressive jackpot feature.

To alter the amount of money you bet per spin, just click the plus and minus arrows below the reels, which will change your payline bet. You can see your total bet by looking to the right of the arrows. Once you have set your bet amount, the game will remember it and all subsequent spins will be played at that amount, unless you change it.

Bonus Features
There are many bonus features at the Age of the Gods slot, however before we look at them, it’s important to point out that there’s a wild symbol at this slot. This symbol can substitute for all other symbols on the reels, except the logo scatter, therefore it can be very helpful. It is also the game’s highest paying symbol, with five on a payline leading to a prize worth 10,000x your payline bet.

Before we get onto the main features, there’s one small bonus feature to mention, called the Special Pantheon of Power. Land all five gods on a single payline and you will win a prize worth 200x your payline bet. It’s not a particularly interesting feature, but the prize is certainly worth winning!

When you manage to get three or more Age of the Gods symbols scattered anywhere on the reels, you’ll win an instant cash prize, plus you’ll start the Age of the Gods Bonus. During this, you’ll need to choose from different icons, revealing a god every time you do. Match three gods and you’ll start their respective free spins round, however reveal Hades and you’ll be sent back to the base game. Every time you finish one of the free spins bonus rounds, you’ll be sent back to this initial game, giving you the chance to win another free spins bonus.

The first free spins bonus comes courtesy of Athena. You’ll get nine free spins, and every spin will see Athena awarding a random multiplier, which will be applied to your win. If you’re lucky, you could get an impressive 5x multiplier during this bonus game.

Next up are the Zeus Free Games, which also see you starting with nine free spins. You’ll start with a 1x multiplier, however this multiplier will increase by one every three free spins. What’s more, a wild symbol will be locked in place in the center of the reels for every spin.

The Poseidon Free Games come next, and these also see you getting nine free spins. On any spin, Poseidon can turn up to five symbols wild, giving you the chance to make some impressive winning combinations.

The final set of free spins come from Hercules and, like the others, you’ll get nine free spins. You’ll find that a stacked Hercules wild symbol, which can substitute for all symbols except the game’s logo, fills the middle reel on every spin.

Age of the God’s Maximum Win
There is no set maximum win at this slot, as it has a progressive jackpot, however this jackpot has been known to be as large as $1.3 million in the past. In terms of the standard wins during the base game, the maximum prize per payline is 10,000x your payline bet, which translates to $20,000 for those playing at the highest stakes. This is won when you manage to get five wild symbols across one of the game’s 20 paylines.

Is Age of the Gods Worth Playing and Who Should Play It?
Age of the Gods is certainly worth playing. The progressive jackpot, while not as large as those found at online slots like Mega Moolah and Mega Fortune, is undoubtedly the biggest selling point of this slot. You’ll also enjoy the gameplay, as well as the numerous bonus features, plus the theme is a really exciting one.

The main group of people who should play this slot are progressive jackpot hunters. Fans of ancient Greece should also give this slot a spin, as should those who are simply looking for an enjoyable slot that offers plenty of bonus rounds. This game has a medium to high volatility, which might put off some players with lower account balances, as a high volatility means that money can disappear very quickly due to the relatively low number of wins. On the other hand, money can also be won very quickly too, as when wins do arrive, they can be significant! 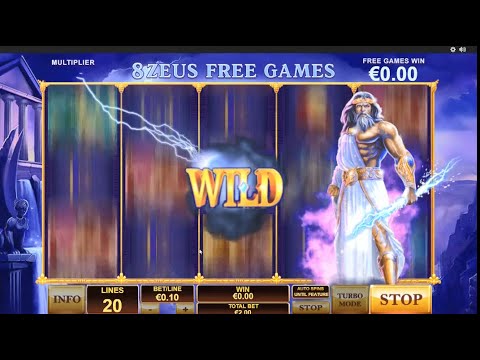 If you want to know how to play Age of the Gods , you’re in the right place. You’ll first need to choose how much money to bet, and then spin the reels. As with most slots, you’ll then win a prize if you get a winning combination on the reels – all possible winning combinations can be seen on the paytable. If you get three or more logo symbols, you’ll activate the Age of the Gods bonus game, which leads to four free spins bonuses. You can also start the progressive jackpot game on any spin.

There is no way to guarantee you’ll win money at this slot, however you can improve your chances of winning the Age of the Gods jackpot by placing higher bets. This is because the higher your bet, the better your chances are of starting the progressive jackpot bonus game. So, those looking for how to win on Age of the Gods should bet as much as they can, without spending more than they can afford to lose.

Age of the Gods Slot RTP

The Age of the Gods RTP isn’t really very impressive, as it comes in at just 94.03%. This is lower than the average return-to-player found at online slot machines. If you’re new to the world of online slots, the Age of the Gods RTP tells you, on average, how much of the money spent on the game will be paid back out in prizes. So, over a period of millions of spins, this game will pay back $94.03 for every $100 spent on it.

Looking to find a particular piece of information on Age of the Gods ? If so, you could find what you’re looking for in the table we’ve created, which covers everything from the game’s volatility, through to how much money you can bet. Found what you’re looking for? If so, it’s now time to start playing Age of the Gods online, either for free on this page, or for real money at one of our recommended online casinos.