Sisters of the Sun

For the Ancient Egypt theme lovers, Sisters of the Sun Slot machine by Play’n GO is an absolute must-play. It’s not only beautiful but entertaining too!

Play Sisters of the Sun Slots Online For Free!

These are ancient deities, whose names have been lost to the sands of time. Egyptians worshipped a plethora of goddesses during their time. Today we’ll explore the powers of Sekhmet, Hathor, and Bastet in this review of Sisters of the Sun.

Sisters of the Sun is a new video slot game developed by Play’n GO. The inventive design for this machine has it played on a 5×5 grid and boasts some amazing graphics, such as crisp colors that pop off of your screen with animations like they are coming to life right in front you! Don’t miss out on all these great features!

Sisters of the Sun Slot Review

The ancient Egyptians loved to worship the Sun, and they were so devoted that there was a whole pantheon of gods for it. With the sun rising and setting, it’s time for these powerful goddesses Sekhmet, Hathor, and Bastet to take their rightful place in this world. The sky may be wide open with possibilities but only one can rule at a time.

Sisters of the Sun Theme
Ancient Egypt is a land of mystery and intrigue. The people who lived there worshipped the trinity goddesses Sekhmet, Hathor, and Bastet to please them with offerings in order to give thanks for life’s true meaning: death.

In this video slot machine game, you will be transported back into Ancient Egyptian culture as you follow their beliefs through gameplay that includes free spins (that can provide up to 5x multipliers), wilds and scatter symbols which trigger bonus games if three or more appear on reels 2-4 during any spin.

Betting Options
With the betting options ranging as low as $0.20 and all they way up to $100, you can bet on a variety of outcomes with the absolute maximum win exposure being $1,500,000!

This slot enables players to have many chances for victory with no risk to play right here on ManySpins. The reason for that? You can play Sisters of the Sun free on our site!

Wild symbols can substitute for any symbol (except for the Scatter symbol), but they only show up when a winning combination of three or more is removed from the board. This means you can never know what to expect next! The Scatter symbol can appear during your initial spin or via the Gift of Ra mechanic where they are scattered randomly throughout once spin round ends.

Every time you spin the reels, the Eye of Ra appears on 5 random grid locations. The best way to describe it is that the win multiplier increases by one when you’re able to land a ball in an eye location. It resets before each new spin except when it is during a Free Spins round.

With a little luck, you can get the Goddess Power feature that triggers on non-winning spins. Players can activate different goddesses during the game. Each one has different abilities that will either change the symbols on-screen or remove other ones. The active goddess changes only when you go through the Goddess Power Activation. Each time the game opens you will be given a random goddess, with the order of goddesses fixed to: Sekhmet, Hathor, Bastet.

The Sisterhood feature is triggered with 1 Scatter symbol. One free round is awarded, and the win multiplier reset to its original. The Goddess Power is performed each time no winning combination is provided until all three have performed their respective abilities.
The Free Spins feature gives you a selection of three goddesses. Before the reels spin up, you’ll have to choose which one will bestow your fortune upon you; Sekhmet awards 4 initial spins; Hathor awards 5 initial spins; Bastet awards 8 initial spins. The win multiplier is carried over from the Sisterhood feature, only resetting once it’s all done.

Sisters of the Sun Maximum Win
If you manage to clear the entire grid in Sisters of the Sun, an instant prize is awarded. The amount of that reward is 50s your bet multiplied by any active win multiplier when it was cleared! As mentioned earlier in this review, the absolute maximum win exposure is $1,500,000!

Big wins Sisters of the Sun 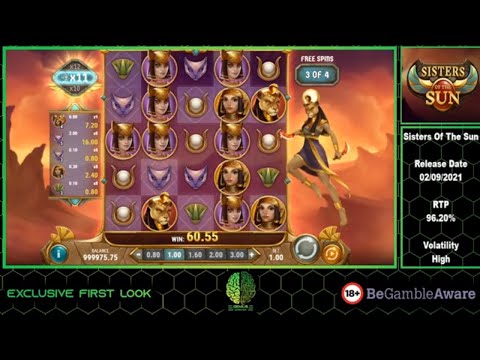 The screen of this slot machine is thoughtfully arranged to be simple and efficient. All the buttons necessary for gameplay are located at the bottom, making it easy to start spinning reels with just a click or two. Players can set the reels spinning with precise wagers and buttons there. The rest is simple, arranged in a way that makes it easy to figure out how to play these slot machines.

Sisters of the Sun RTP

The Return to Player percentage is 96.20%, which means that the game will pay back around $96 for every 100 in bets you lay down over a long period of time – but it’s not guaranteed! Some games are more generous than others and some players lose hard, so while this figure may sound high initially keep your eyes peeled as there’s no link between payout rates on online slots and their RTP percentages.

Take a look at the table we’ve created to find out about specific features of this online slot machine, including how much you can bet per spin and what the Return to Player percentage is.

Play Sisters of the Sun for free with a no-download, instant play format that will have you hooked in seconds. You can test out your luck and bet as much per spin on this slot machine before making an online wager at any of our featured for real money!