It’s been a good couple of decades since a certain all-female pop group conquered the world and saw out the final decade of the 20th century in true British style – and many people miss them. Thankfully, however, you can come close to reliving the 1990s when you play the Moon Princess slot machine from Play‘n GO. Admittedly there are only 3 young ladies taking center stage in this game, but they’ve got more than enough Girl Power between them to compensate.

Play Moon Princess online and you’ll get to enjoy the in-game soundtrack as well, rather than watch it lip-synched from half a mile away – and the advantages don’t stop there: This game has enough features to keep you busy for as long as you’d like, with a whole world of ideas that’ll entertain you for years to come. Why not play free Moon Princess slots right now, to see if it’s the perfect game for you?

We spent many happy hours playing this game and putting our Moon Princess slot machine review together, so you can quickly find out all about it before you decide to join in the fun for real.

In terms of the symbols, you’ll find all three princesses represented, as well as various other cute symbols, including bells and stars. Everything is bright and colorful, adding to the enjoyment of every spin. The layout of the page ensures it’s easy to navigate, with all the important controls below the reels and details of wins displayed to the left.

Betting Options
The minimum bet at this online slot is $0.20, which should be low enough for all but the very lowest stakes players. At the other end of the scale, the most that can be bet on a spin is $100 – not the most we’ve seen, but also certainly not the least either. As with nearly all slots, the more you bet, the more money you could win.

The heart-shaped ‘+’ and ‘-‘ buttons on the controller at the base of the game let you select your stake per spin. There’s no need to worry about setting your bet size before every spin, as once you’ve set it once, the game will remember it for all subsequent spins, until you choose to change it or close the game.

Bonus Features
Girl Power features very heavily in this online slot: It’s the name given to the first feature you’ll probably encounter, as it sees each of the 3 main characters – Love, Star and Storm – helping to create winning patterns on randomly-selected losing spins. Symbols can be transformed, wilds can appear, and symbols can also be destroyed.

Each princess will perform her particular brand of magic on you again if you trigger the Princess Trinity feature. This is achieved by filling up a meter to the side of the playing grid by landing princess symbols in winning combinations in the base game, and a total of five princesses will grant you the feature.

The Cascading Reels feature also has to be mentioned in this section of our Moon Princess review, as it plays a huge role in the game. When you get a winning combination, you’ll be paid, before the winning symbols disappear and allow those above to replace them. This gives you another chance of winning. Every consecutive win will see your multiplier increasing, and it’s possible to get up to a 20x multiplier. The multiplier resets when a new win doesn’t appear.

Next up comes an extraordinary free spins round. The cascading reel format makes it possible to clear the playing grid of symbols if you make enough consecutive wins, and doing so means you’ll get some games on the house. At this point you’ll be asked to select one of the princesses, and you’ll be given the free spin feature unique to her. You’ll need to choose how many spins you receive – the more spins you choose, the lower your chance is of retriggering more free spins – something that is done by filling the meter during the bonus game.

Any free spins that don’t produce a winning result will be enhanced by each respective princess’ Girl Power feature. What’s more, multipliers gained during free spins are not reset between turns, making it easier to get huge multipliers, and therefore bigger wins.

Moon Princess Maximum Win
There’s a top standard prize of 50x your stake on offer at the Moon Princess online slot, which is paid when you manage to get five wild symbols on a payline. However, the 20x multiplier can be used to boost this game’s top prize considerably. What’s more, it is possible to win more than once per turn, which increases the maximum win even further.

Is Moon Princess Worth Playing and Who Should Play It?
Moon Princess is well worth a look for the amazing feature play alone, plus the Cascading Reels feature, now common at a number of online slots, is exceptionally exciting and can lead to big prizes. Speaking of prizes, they also make this game well worth playing, as do the fun graphics, which enhance the enjoyment of every spin.

Anyone seeking a Cascading Reels game will love Moon Princess , as will anyone wanting some visually attractive, upbeat entertainment. If you’re new to online slots it might be a little too complex; if you’re new to games featuring Cascading Reels, then it might also be too feature heavy. This is an incredibly volatile slot, which will please those looking for large, but often infrequent, prizes. 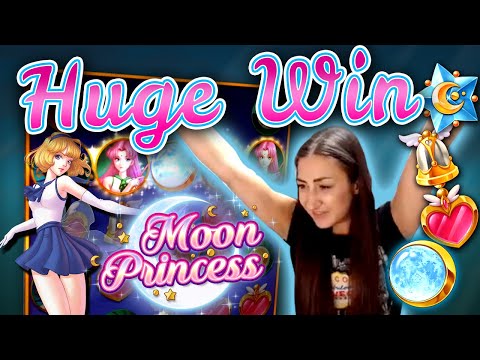 Despite its complexity, it’s easy to get started and if you’re reasonably experienced, you’ll rapidly discover how to play Moon Princess once you’ve enjoyed a few demo rounds. To start, select your bet amount, and then spin the reels. You’ll then win a prize if you manage to get three or more symbols consecutively on a payline, starting from the first reel. You could also start a Moon Princess bonus game on any spin.

Unfortunately, we can’t tell you how to win on Moon Princess , as it’s driven by a random number generator. This ensures that all outcomes are unconnected to one another, so there is never any kind of predictable pattern to what happens when you play. Instead of trying to find a way to win while playing, just enjoy every spin and hope you’re lucky enough to win the Moon Princess jackpot.

The Moon Princess RTP is given as 96.00%. The average return-to-player is around 95.50%, therefore you’ll have a better-than-average chance of winning some money when you play this slot. For those who don’t know, the Moon Princess RTP of 96.00% means that, on average, players win back 96.00% of everything they spend on this slot. Of course, this is an average though, as some will win money, and others won’t.

We’ve compiled a table for you to use if you’d like to compare Moon Princess against any other slots you might be thinking of playing. Once you’ve decided that the Moon Princess online slot is the perfect game for you, it’s simply a case of loading the free game on this page and having a few spins, or heading straight to an online casino and playing it for real money.