King Kong Cash is a Blueprint Gaming slot which brings you an action-packed storyline around Donkey Kong.This 5×3 slot comes with 20 paylines and 95.8% RTP

No other industry fuses classic themes together to produce brilliant new ideas like the online gaming business, and Blueprint Gaming’s King Kong Cash slot machine might be the best example yet. What’s more, this blockbuster also looks and sounds incredible, using state-of-the-art visuals and sound to back up an entire catalogue of bonus features. When you play King Kong Cash online your eyes, ears and brain will all be treated to some of the best slots entertainment imaginable, so get ready to experience an all-out assault on the senses that you’ll never, ever forget.

This game features a colourful cast of jungle-based main characters in an idyllic setting – but it’s no holiday. This is a challenging, high end slots adventure for gamers seeking something wthi many challenges and the huge rewards that such games can bring forth. If the endless features seem intimidating, however, there’s no need to worry: We’ve got a demo game available for you, allowing you to play free King Kong Cash slots galore before you commit to playing for real.

It wasn’t easy tearing ourselves away from this extraordinary slot, but somehow we found the time to write our King Kong slot machine review. A quick read of it before loading up the game itself is undoubtedly the best way to get the most from this game, as you’ll then know exactly what to expect once you start spinning.

King Kong Cash Theme
Imagine the colourful, cartoon-style setting, characters and rolling barrels graphics found on the legendary Donkey Kong video game mixed with the much-loved King Kong movie. That’s what you’ll find here, and it works surprisingly well. Like all of the very best 21st century slot games it’s been given an impressive, premium quality background with an animated compere sat to one side of the reels – in this case, Kong himself. Don’t worry, though: He’s an amiable-looking chap in a floral shirt, rather than a menacing, aeroplane-grabbing misunderstood giant.

On the reels of this slot, you’ll find a number of different creatures, including educated tigers and CEO rhinos, all of whom have been designed in a cartoon style that perfectly matches the rest of the game. The lower value symbols are playing card values, but instead of looking boring they actually enhance the game’s look, as they’ve been expertly styled to complement the slot’s other visual features.

Betting Options
The minimum bet at King Kong Cash is $0.20 – we’ve seen lower before, however this should still be low enough for most players. The highest possible bet is a giant $500 per spin, which will please the big spenders. It might sound obvious to many, but we’ll say it anyway: the more money you bet per spin, the more money you could win. However, please bet sensibly.
It really couldn’t be any easier to alter your bet at this slot, as you just need to click the up and down arrows to the left of the reels. There’s no need to worry about payline bets at this game, which removes a lot of confusion. Once you’ve set your bet once, there’s no need to set it again, unless, of course, you decide you want to decrease or increases the stakes.

Bonus Features
The symbol bearing Kong himself works as a scatter feature in common with most other multiline slots, but the similarity ends there. Instead of triggering a free spins round, 3 or more of this symbol anywhere on the screen takes you instead to the incredible King Kong Bonus round. This offers up a choice of not one but five different features, letting you climb a ladder to access various different bonuses. You’ll have one randomly selected for you, and you can then choose to collect it, or gamble it in an attempt to get a better one.

It took a while, but when putting our King Kong Cash review together, we managed to trigger most of them. The first is called Barrel Blast, which sees a cannon shooting wilds, which land on the reels and then explode. Where they explode, you’ll find a cluster of identical symbols. Next, there’s the King Kong Trail, which sees you trying to progress along a cash trail. Pick from four barrels – two will cause you to advance, and two will end the feature.

Next up, there’s Empire State Free Spins, which, as the name suggests, is a free spins bonus. There are three sets of reels – collect five golden monkeys on one set and you’ll advance to the next level, plus you’ll get extra free spins. As you might imagine, the higher the level you reach, the bigger the prizes can be. What’s more, there are different special wild symbols on each level, including expanding wilds on the third level. It’s not unusual to find multiple expanding wilds on the reels at the same time.

Then there’s another free spins bonus, called Golden Kong Free Spins. You’ll receive 10 free spins, and while they’re active all wins are doubled. You’ll also collect wild symbols during the round. Once the free spins end, you’ll find all the collected wilds added to the reels, and you’ll then get one final spin with them all in place.

Finally, there’s the Big Money Bonus, during which you can win a huge 1,000x your total bet. It’s simple to play – just pick from different bananas to win. If you manage to get to this bonus, you’ll almost certainly win a significant prize, even if you don’t win the maximum payout.

This set of features alone takes this game straight to the top floor in terms of gameplay, but King Kong Cash doesn’t stop there – and that’s because Kong himself, sat idly by the side of the reels, has another surprise in store for you. Whilst other slot game compere characters play no part in the actual outcome of the game, Kong is different. He will, periodically, stop snoozing – and at this point he’ll activate 1 of 4 different Monkey Modifiers.

Then there’s the Bonus Boost feature, which adds a random number of Bonus symbols to the reels. Finally, there’s the King Kong Streak feature, which locks a win in place and then respins the reels, giving you the chance to win again. This will continue until no new win is found on the reels.

King Kong Cash Maximum Win
The most that can be won at this slot is 1,000x your total stake. This means that those playing for the maximum stakes could win an impressive $500,000! You can win the jackpot if you manage to activate the Big Money Bonus feature. During the base game, the most that can be won per payline is 500x your payline bet. This is won by getting five logo symbols or five wild symbols, or a mixture of both, on a payline. It’s worth $12,500 to those playing for the maximum stakes.

Is King Kong Cash Worth Playing and Who Should Play It?
This is one of Blueprint Gaming’s finest slots and a huge achievement in terms of theming, looks and features – so it’s well worth checking out, though you’ll need to invest plenty of time in it to appreciate everything it has to offer. The huge jackpot worth $500,000 is another clear reason to play this fantastic online slot.

If you’re looking for a quick 5-minute session during a work break, then this isn’t the game for you; similarly, if you want something simple with nothing more than basic scatters and wild features then it’ll prove too complex. However, if you’re looking for a game to fall in love with that’ll keep you entertained indefinitely then it comes highly recommended. 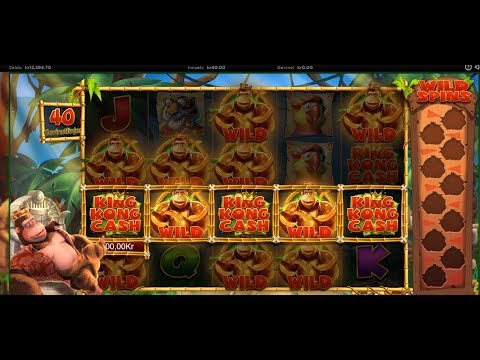 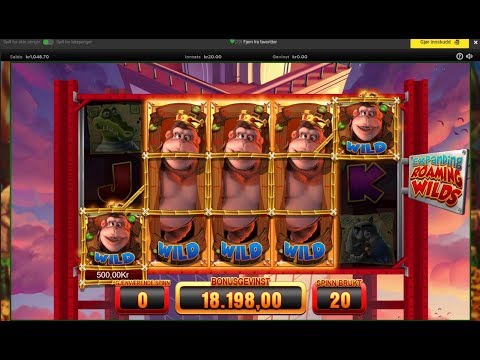 The game may be highly involved, but it’s not hard to know how to play King Kong Cash . Simply select your bet level, choose from a wide range of autoplay options if you like and then you can get spinning using the button to the right of the reels. Get two/three identical symbols next to each other on a payline, starting from the first reel, and you’ll win a cash prize. Get three or more Bonus symbols and you’ll get to play a King Kong Cash bonus game – play the Big Money Bonus feature and you could win the King Kong Cash jackpot.

We cannot, however, tell you how to win on King Kong Cash , as Blueprint Gaming’s random number generator ensures that the outcome of each spin is entirely independent from any other. This game’s jackpot could be a spin away, or it might take longer to win it – and that’s what makes it so entertaining, as anything can happen.

This slot comes with a 95.80% return-to-player figure. The King Kong Cash RTP means that you can typically expect a return of $95.80 for every $100 wagered over the long term. You will need to bear in mind, however, that the King Kong Cash RTP is a statistical average only and that the returns you experience can and will vary considerably around this figure.

Check out the table we’ve created to find out the main features of King Kong Cash , such as how much you can bet and what the RTP is, to decide whether you want to play this game. If you do decide you want to play, you’ve got two choices: play it for free on this page or play it for real money at an online casino.