Dragonfall is a Blueprint Gaming slot with a simple, unique and exquisite gaming environment.

Thanks to pioneering slots like Gonzo’s Quest and Da Vinci Diamonds, the cascading symbol format has become wildly popular in recent years. This isn’t surprising really as it’s such a satisfying and exciting way to enjoy playing – though even for a cascading reels game the fabulous Dragonfall slot machine from Blueprint Gaming is a remarkable achievement.

The first thing that hits you upon seeing it for the first time is just how amazing it is to look at. However, when you play Dragonfall online you won’t just be given a visual treat – rack up the right combinations and you’ll set your bank balance on fire too. There’s quite a lot to get your head round though, so we’d highly recommend that you try some free Dragonfall slots sessions before playing for real money, as this is one challenge you’ll need to be fighting fit to take on.

Given how revolutionary this game is we’d highly recommend that you read our Dragonfall slot machine review before taking it for a spin, as it introduces so many new ideas. Once you’re familiar with it you’ll be ready to get out your sword, put your best foot forward and start slaying as many challenges as possible for some heroic cash rewards.

Dragonfall Theme
The title of this game says it all, really. It’s themed around dragons, and it’s got falling symbols! The whole thing takes place against a vaulted medieval stone chamber background complete with flaming torches, stone dragons, piles of cash and jewels – and some highly ominous background music. We loved the soundtrack, though when we were researching our Dragonfall review we discovered that it can be toggled on and off, so if we fancied listening to music of our own choice instead whilst we played that was no problem.

The playing area itself is the star of the show, however. The grid is a beautiful, stone-bound board with a symbol set made up of various dragon eggs. This is a neat idea: We all think of dragons as fire-breathing monsters, but they have to start off somewhere, and a huge amount of imagination has gone into these symbols, along with a decent helping of good taste on top.

Betting Options
The minimum bet at this online slot is just $0.10, which should be low enough for most players. Those looking to bet less than this should check out one of the many penny slots offered at online casinos. The maximum bet at this slot is just $10, which won’t be enough to excite high stakes players. The more you bet, the more money you can win, but please bet sensibly.
There are no win lines to worry about with this game, so you’ll be playing a simple bet-per-spin figure. This couldn’t be easier to adjust: You simply use the up and down arrows above and below the “Bet” button at the side of the screen to select your bet size. Once you’ve chosen how much to bet, all subsequent spins will be played for that bet size, until you stop playing or change the bet.

Bonus Features
At this slot, you won’t be trying to line up symbols on paylines. Instead, the dragon eggs form clusters. Land 5 or more in a cluster and you’ll win a cash prize. These eggs will then explode, and their fragments will dissolve, allowing the eggs above them to drop into their place. This, of course, changes the composition of the board which can set off a chain reaction of even more wins, potentially continuing indefinitely.

At first glance the dragon’s eye wild symbol looks like something you might be more familiar with from a regular slot game – but it works in a very different way. It will remain on the screen after being in a winning combination, instead of exploding with the other symbols. What’s more, it’s multiplier will be enhanced by 1 after every consecutive activation of the cascading symbols feature. The multiplier resets to 1x after the cascading symbols feature has finished.

The wild symbol also acts as a scatter and when 3 or more of them appear you’ll be given free games. You’ll receive 6 free games and throughout them wilds will remain sticky, meaning that they stay on the reels for the duration of the free spins. What’s more, a wild’s multiplier increases every time it’s involved in a winning spin or cascade – the wins don’t have to be consecutive ones.

You’ll also need to watch out for the Mega Fall feature. This can activate randomly and sees a huge 3×3 giant egg symbol appear on the reels. It will then reveal 9 of exactly the same symbol, giving you a good chance of making multiple winning combinations.

There’s one other feature on offer here that’s very rare indeed: Use the Bonus Bet feature and you’ll play at 100x your total bet level, but you’ll be guaranteed at least 3 bonus symbols, ensuring you’ll be granted free games. Choosing whether or not to activate this option is a major strategic decision and breathes some serious fire into what is already a highly impressive slot.

Dragonfall Maximum Win
Should you manage to make a cluster of 25 or more symbols featuring the dragon wrapped around an egg you’ll be treated to a payout of 100x your stake. This means that those betting the maximum could win $1,000. We realize this isn’t particularly impressive, however you can win multiple times on a single spin thanks to the cascading symbols, plus prizes can be increased dramatically by the multipliers.

Is Dragonfall Worth Playing and Who Should Play It?
This game is an absolute must, even if you’re playing just for the experience rather than looking to win cash. It’s a feast for the eyes and whilst there are other games offering cascading reels, none do it with as much panache as Dragonfall . The prizes can also be really impressive, thanks to the cascading symbols and the multipliers.

Anyone who likes games with lots of ways to win will love Dragonfall , as winning clusters can consist of far more symbols than you’d ever be able to combine on a standard 5-reel slot. Also, it’s a great choice for those looking for a highly volatile slot. The higher-than-average RTP also makes it a fantastic choice for those only interested in having the best chance possible of winning some money. 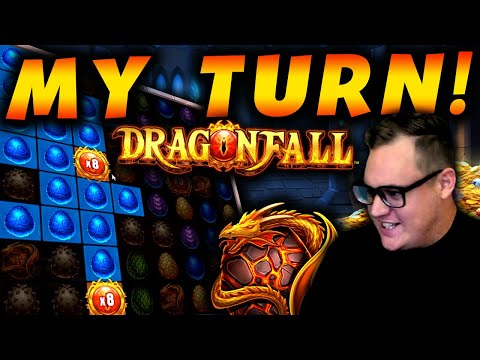 Once you’ve set your bet level it’s not too hard to work out how to play Dragonfall , though it’s worth being aware that you might want to set autoplay options to make your sessions easier. In order to win some money, you just need to get 5 or more eggs in a cluster, which will then cause the cascading symbols feature to start. Get 3 or more scatter symbols on the reels and you’ll start the Dragonfall bonus game.

What we can’t do is tell you how to win on Dragonfall , as all outcomes are completely random. Each and every tale on this adventure has a different ending, so we can’t predict when you’ll score a Dragonfall jackpot or trigger the next bonus round. Instead of trying to find out how to win, just concentrate on enjoying this fantastic game instead.

The Dragonfall RTP figure is published at 95.65%. That means that over the long term you can expect to win $95.65 for every $100 you wager playing the game. This, though, is an average figure, therefore don’t expect to win the exact Dragonfall RTP. Some players will win money when they play, while others won’t win anything.

We’ve put a table together, so that you can quickly compare Dragonfall to other slots you might be thinking of playing. Whilst its format is very different to most slots, it does still share many similarities with other games, and you might find the comparisons highly useful when deciding which games to play. Once you’ve taken a look over the table, you should try the slot out for yourself, either for free on this page, or for real money at an online casino.