Ted is a Blueprint Gaming slot where you take on an adventurous storyline while using huge multipliers to win big.

If you’ve seen the Ted movie, you’ll probably know exactly what to expect. If not, get ready for a slot full of crass humor, mostly based on one rather funny Ted dy bear. Blueprint Gaming have added exciting gameplay and big prizes to the already existing humor, and have managed to create one of the best slots around. Why not find out more by reading our detailed Ted slot machine review?

We’re not only here to tell you about the Ted slot, as we’re also giving you the chance to play free Ted slots. The free game on this page has all the same features as the real money game, but it won’t cost you anything to play. You can then play Ted online for real money at a casino if you decide that you enjoy playing this slot.

In this Ted review, you’re going to find out everything you need to know about this slot, including how the many different bonus features work and how much you’re able to bet on each spin. So, keep reading our Ted slot machine review to find out about this superb slot from Blueprint Gaming!

This slot is based on the famous Ted movie, starring Mark Wahlberg and a CGI Ted dy with a rather foul mouth and crass sense of humor. It certainly isn’t the most intelligent movie around, but it is one of the funniest! You’ll find Ted himself lying down below the reels, while the backdrop is the messy front room shared by Ted and John, Mark Wahlberg’s character.

On the reels, you’ll find Ted himself, as well as Lori, John’s girlfriend. You’ll also find a goose on the reels – those who have watched the movie will understand why – plus you’ll find the Ted logo, a six pack of beer, a bong and a Thunder Buddy Bonus symbol. The lower paying symbols are playing card symbols – they’re not designed very originally and don’t add anything to the overall look of the game.

The Ted slot machine has a minimum bet of $0.20, which is $0.01 for each of the slot’s 20 paylines, which are fixed, meaning that you can’t alter how many are active on each spin. The maximum bet is $200, which should be high enough for nearly everyone looking to play this game. The more you bet, the more you can win, however please bet responsibly and only risk what you can afford to lose.
It really couldn’t be much easier to alter the amount of money you bet. Your bet amount is shown to the left of the reels, and you just have to click the arrows above and below this value to change it. Once you have set your bet amount, the game will remember it for all subsequent spins, until you decide to change it or stop playing.

Okay, get ready, as there are no fewer than 11 different bonus features at this slot machine! Before looking at those, the Ted symbol needs mentioning, as it is the wild symbol. This means that it can substitute for all other symbols on the reels, except the Thunder Buddies Bonus symbol. The logo also needs mentioning, as, along with the wild, this is the jackpot symbol, and it comes stacked on the reels.

There are six features that can activate at any point while you’re playing, and you should see them fairly often. Lazer Gun Infectious Wilds will see Ted firing a lazer at the reels, turning symbols wild, while the Psychedelic Super Spin sees Ted blowing smoke over the reels, adding loads of Ted symbols, which will then turn into identical symbols. There’s then the Beer Shuffle bonus, which sees Ted spraying beer onto the reels and the reels then shuffling to reveal a win. The reels will continue shuffling and revealing new prizes until the bubbles disappear.

The next random bonus is the Psychedelic Colossal Spin, which sees Ted blowing smoke onto the reels, causing one large 3×3 symbol to appear. Then there’s the TV Remote Symbol Streak, which can happen after a win and sees you getting a respin with the winning symbols remaining in place. Get another win and you’ll receive another respin, with the winning symbols in place. This continues until no new winning combinations are formed. Finally, there’s the Psychedelic Bonus Boost, which again sees Ted blowing smoke over the reels, adding more Bonus symbols and boosting your chances of activating the main bonus features.

Then there are the five main bonus features. You’ll need to get three or more Thunder Buddies Bonus symbols in order to bring up a Wheel of Fortune, which is used to randomly select which one of the five bonuses you get to play. When a bonus is selecTed , you can decide whether to risk it, which will see you winning the next best or next worst bonus. This can’t be done if the Big Money Bonus is selecTed , as it’s ranked as the best bonus available.

Firstly, there’s the Big Money Bonus, which can lead to you winning up to 1,000x your bet. You’ll see loads of multipliers spinning in front of you and one will be automatically selecTed . You then pick from different signs, to see whether you get to spin again and win another prize, or whether the feature ends.

Then there’s the Wheel of Fortune. You’ll find a wheel on the screen, with three different levels. You will need to pick from different options, which can upgrade the wheel or cause the wheel to spin. When the wheel stops spinning, you could progress to the next level of the wheel, where you’ll find better prizes, or you could win a cash prize or start one of the other features.

The next bonus you could start is the Bar Crawl Bonus. You’ll choose from different bottles and move around a board, and while you move around you could win multipliers and cash prizes. You could also win entry into the Big Money Bonus, where you can win even bigger prizes. This bonus round ends when you get arresTed .

Next is the S Mart Free Spins bonus. The free spins will play out over a background of supermarket shelves, which contain wild symbols. You’ll receive five free spins and during the free spins, you could find a huge number of wilds on the reels, which can translate into some huge prizes.

Finally, there’s the Flash Free Spins bonus. You’ll start with 10 free spins and after any spin containing a symbol showing a lightning bolt, you’ll be taken to a pyramid. This pyramid contains various prizes, including extra free spins and cash prizes. The higher up the pyramid you get, the better the boosts to the feature become. The bonus stops when you run out of free spins.

It is possible to win some huge prizes when you’re playing the Ted online slot, with the highest possible prize per payline being 500x your payline bet. This means that those betting the maximum of $10 per payline could win $5,000 per payline. The big prizes come during the main bonus features though, where you could win a prize worth an impressive 1,000x your bet. The feature offering the highest average prize is the Big Money Bonus.

Is the Ted Slot Machine Worth Playing and Who Should Play It?

The Ted slot machine is definitely worth playing, regardless of whether you’ve seen the movie or not. It offers everything a player could want, including absolutely loads of exciting bonus rounds, fantastic graphics and fun gameplay. What’s more, it offers some huge prizes, which can be worth thousands and thousands of dollars.

Those who enjoy slots with lots of bonuses should really enjoy Ted , however those looking for a simpler game might want to give this slot a miss. Those looking for big prizes should also find the Ted slot attractive. Ted is a slot with a high volatility though, meaning wins can be infrequent. When they do arrive, they can be large though. Players with small account balances should think carefully about playing this slot, as the infrequent wins mean that they could lose their bankroll quickly. Of course, they could win money quickly as well though! 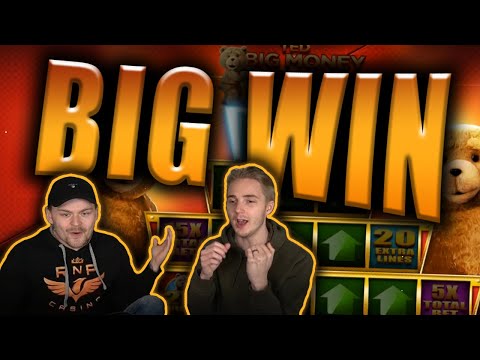 Looking to find out how to play Ted ? Well, the first thing you need to do is choose how much to bet. You can then spin the reels. You’ll win a cash prize if you get two/three (depending on the symbol) identical symbols or wild symbols next to each other on a payline, starting from the first symbol. You could be boosTed by a random feature starting, or you could start a main Ted bonus game by getting three or more Thunder Buddy Bonus symbols anywhere on the reels. All bonuses are explained further up this page.

Those trying to find out how to win on Ted are not going to find what they’re looking for. This is because the Ted online slot, along with all other online slots, is completely random, giving every player exactly the same chances of winning. There’s absolutely nothing you can do to change this. So, whether you win the Ted jackpot is simply down to luck.

The Ted RTP is a reasonable 95.80%, which is slightly over the average for online slots. The fact that the Ted RTP is 95.80% means that the game will, on average, pay back 95.80% of all money spent on it. There is no guarantee you’ll win back this exact percentage though, as some will win money, and others won’t manage to win anything at all.

Want to quickly find out what the RTP of this slot is, or how much money you could win? Or perhaps you just want to quickly see which software provider made this game? You’ll be able to find out all these facts, plus more, when you look through the table we’ve creaTed . You can then load up the free Ted slot and try the game for yourself, so you can decide whether you want to play the slot for real money.