Money Train 2 is a Relax Gaming slot that is inspired in the railroad of the Wild West!

Many casino players thought that the original Money Train from Relax Gaming was a superb slot. They’ll now be excited to find that a sequel has been released to the popular game, which offers an even more exciting experience than the original. The Money Train 2 slot machine offers a huge top prize of 50,000x your stake, along with some exceptionally exciting features, including the fantastic Money Cart Bonus Round.

On this page, we won’t just tell you about this slot, as we’ll also allow you to play free Money Train 2 slots, so you can try out the game without having to risk any of your own money. If you enjoy playing, you can then head away and play Money Train 2 online for real money at one of the many casinos offering this game.

We’ll be letting you know everything you need to know about this game in our Money Train 2 slot machine review, including how the Money Cart Bonus Round works and the size of the game’s top prize. So, if you’re interested in playing this slot, make sure you read through our detailed Money Train 2 review before you start spinning the reels!

The theme of this slot is the railroad of the Wild West. You’ll find a large iron train on a set of reels, while the background depicts a Wild West town, complete with rotating windmill. The sounds also add hugely to the overall atmosphere of the game, so make sure you have the volume turned up when you play!

The minimum bet at this slot is $0.20, while the most that can be bet per spin is a pretty disappointing $20. This low maximum bet will cause many high rollers to head elsewhere, to slots that allow them to bet $100 or more per spin. To change your bet amount, just click the plus and minus arrows to either side of the “Bet” field.

There are two features to mention in this section, with the first being the Respin Feature. This is triggered when two Bonus symbols land anywhere on the reels. Each Bonus symbol will turn into a multiplier, which are then added together. You’ll then receive respins until a winning combination is made, with the multiplier rising by 1x after each non-winning spin. When you do get a winning combination, the multiplier will be applied to it.

The second feature is called the Money Cart Bonus Round, and this starts when you manage to get three or more Bonus symbols on the reels. The Persistent symbols can also substitute for the Bonus symbols. You’ll receive three free spins to start and the round ends when you run out of free spins. When the round ends, all multipliers displayed are added up and applied to your bet to reveal your overall prize.

The reels are initially blank, but a number of different symbols can land – none of which are the same as those found in the base game. Every time any symbol lands on the reels, the number of free spins will reset to its maximum. If you can fill an entire column with symbols, you’ll find another reel becoming active.

You’ll also find the Sniper sometimes appearing on the reels, which causes the values of up to eight multipliers to double. The Necromancer revives two to seven characters that have already been used, causing them to apply their effects to the reels again. The Reset Plus symbol causes the starting number of free spins to increase by one. So, for example, getting one of these symbols will mean that the number of free spins resets to four, not three, any time a symbol lands.

The free spins will continue until the counter reaches zero, or until you reach the maximum prize available, which is a huge 50,000x your bet.

The maximum prize you can win when playing Money Train 2 is 50,000x your bet. This means that those betting the maximum of $20 per spin could win up to $1 million while playing. This huge prize can be won during the Money Cart Bonus Round. In the base game, the highest paying symbols are the Necromancer and the wild – get five of them on a payline and you’ll win 20x your bet.

Is Money Train 2 Worth Playing and Who Should Play It?

Money Train 2 is a slot that is absolutely worth playing, as it offers one of the most exciting playing experiences around. The enjoyment is at its highest when you start the Money Cart Bonus Round, which is one of the best bonuses we’ve ever seen. It’s also worth playing as the potential jackpot of 50,000x your bet is huge!

Those who have played and enjoyed the original Money Train slot should definitely try out the sequel, as it’s even more exciting. This slot is also great for those looking for a game with very high volatility. However, we’d advise newer players to steer clear of Money Train 2 for a while, as the bonus is quite complex. 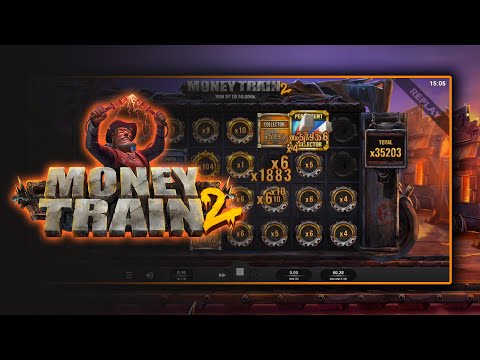 Working out how to play Money Train 2 is pretty easy at first – just choose your bet amount, spin the reels and hope that a winning combination appears. If it does, you’ll win an instant cash prize. The more complex aspect of this slot comes when you start the main Money Train 2 bonus game, which takes place on a new set of reels with different symbols and gameplay. You can find details of how to play this bonus game further up this page.

There is no way to work out how to win on Money Train 2. This game, as with all other slots, uses something called a random number generator, which makes sure every spin is random. There is no way to influence the random number generator, nor are there any hidden flaws in the game that you can exploit to guarantee prizes. So, you never know when you’ll win the huge Money Train 2 jackpot.

The Money Train RTP is 96.40% – a figure higher than the average found at online slots. The return-to-player tells you how much money a slot will return to players over millions of spins, so the higher the number, the better the slot is. You aren’t guaranteed to win back the exact RTP, as some will win thousands, and others won’t win anything. As with most online slots, there’s no way to change the Money Train 2 RTP.

If you’re looking to find out about a specific feature of this slot, take a look at the table we’ve created, which tells you about everything from the slot’s volatility to how much you can bet per spin. When you’ve got all the information you need, it’s time to load the game on this page and play for free. If you enjoy spinning the reels, you can then start playing for real money at an online casino.