Marching Legions is a Relax Gaming slot where you join an unstoppable roman army and fight your way to unending glory.

It’s quite possible that you’ve never seen anything quite like Relax gaming’s Marching Legions slot machine. It’s not the first game themed around Roman centurions, but its Lego-style graphics and land casino nudge feature take it into unusual – and from our perspective very welcome – territory. Play Marching Legions online and you’ll get a playing experience aimed at hardcore slots fans, but with a fun, likeable cast of characters and an easy, instantly engaging environment that’ll feel like home straight away. There’s lots to get stuck into on this game – something that seems to be a signature style for Relax – but you’ll have a great time finding your way around, and hopefully develop some skills that’ll put you in good stead to make decent regular wins on other games of similar complexity.

There’s no need, incidentally, to put your neck on the line at any point. You can opt to play free Marching Legions slots any time you like for an entire era if you wish. You can switch to real money play whenever you like, and even switch back again if you want. Just play our free demo game and you can spend as long as you like simulating the kind of battles you’ll be expected to take part in until you’re ready to engage with the enemy and fight your way to glory.

We spent a number of hours trying this game out and the only battle we fought was managing to put it down for long enough to write our Marching Legions review. Nonetheless we somehow managed to tear ourselves away for a few minutes, so do please read our assessment as it could help you when you start playing for real.

Marching Legions Theme
Roman-themed games tend to show the indulgent side of Roman life with grapes, goblets and perfectly proportioned, flaxen-haired youngsters in togas – but we prefer the games that feature the grittier, more exciting side of this inspirational culture, and that means war. This is why the theme of this slot appealed to us, as war is very much its main focus.

On the reels, you’ll find plenty of symbols you’d associate with the Roman war machine, such as centurions and swords, all designed in a cartoonish way. The lower value symbols at this slot are small stone carvings with different Roman themes – they’re not that exciting, but fit in with the theme nicely.

Betting Options
You can take part in the carnage on offer from just $0.10 a spin, though if you think you’ve got what it takes to overcome an entire army of highly trained human killing machines then you can choose from 13 bet levels, culminating in a maximum of $100. As you might expect, bigger bets lead to bigger potential prizes.

To choose your bet size, just click the symbols bearing a pile of coins on the right-hand side of the reels and your options will be clearly laid out for you. Click on one of the bet options to select it. You will find that this bet size is used for all subsequent spins in your playing session, unless you choose to change it.

Bonus Features
If you manage to spin an entire reel of legionnaires, you’ll trigger some re-spins with a difference: Your reel of soldiers will march one reel to the left with every re-spin until they fall off the screen. If you’ve ever seen the Walking Wilds on NetEnt’s Jack and the Beanstalk game you’ll be familiar with this idea, although the legionnaires aren’t wild symbols at this slot.

Just as interesting, however, is the nudge feature. Should you spin stacked legionnaires that don’t take up a whole reel, there’s a chance that the stack will nudge into place, which will then start the respins feature. We wish more online slots would offer this hugely popular land casino idea, and when we were preparing our Marching Legions review it was our favourite segment of the game.

Free spins work a little differently in this game. Rather than simply landing a set of scatter symbols, you’ll take one step up on the Collect Meter every time a stack of legionnaires marches off the screen. This meter sits to the left of the reels, and every time the white bar fills the meter, your score will advance by one. When it reaches 5, you’ll be given your free spins. Alternatively, you can pay a sum worth 120x your bet to start the free spins bonus feature.

At this point you’ll experience various waves of attack, with entire stacks of soldiers moving from the rightmost reel. You’ll start with one stack of soldiers, but before the reels start spinning, three buccinas will be added to the fifth reel. If you can collect all three of them before the stacked soldiers fall from the reels, you’ll receive another wave of soldiers, this time one reel wider than before. This continues until you fail to collect all buccinas and can see you filling the entire set of reels with soldiers, which will lead to a huge prize. It should also be mentioned that you can also spin in stacks of soldiers, which can prolong the free spins even more.

Marching Legions Maximum Win
Make it to the top of the pile in this game and there’s a payout of 10,000x your bet – which at the highest level equates to $1 million. Not many slots can offer a huge prize like that without a progressive jackpot – but this is no ordinary slot! When it comes to the highest paying symbol, it’s the legionnaire, which pays 2.5x your bet when five of them appear on a payline. This clearly isn’t much, however the big prizes come when you manage to combine loads of wins on a single turn.

Is Marching Legions Worth Playing and Who Should Play It?
Marching Legions is definitely a slot that’s worth playing. This is for many reasons, including the superb theme and the fact that there’s a prize worth up to $1 million waiting to be won by those playing at the highest stakes. The main reason to play, however, is the amazingly exciting way in which the respins and the free spins work.

Given the obvious levels of design expertise that have gone into it we’d recommend this game to any expert slots player. Beginners and early intermediate players would be better off avoiding it, though. Not only is the free spins round exceptionally complex but the option to buy extra spins adds an entire extra dimension to the playing experience. 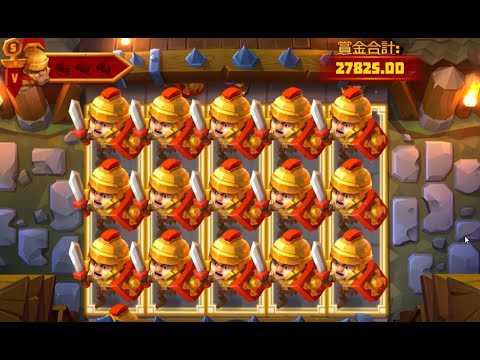 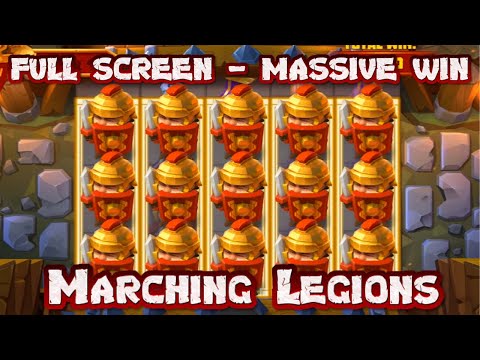 Learning how to play Marching Legions is easy: Just set your bet level and use the spin or autoplay button to commence your journey. You’ll find that you win a prize if you get two/three identical symbols next to each other on a payline, starting from the first reel. You will start the Marching Legions bonus game when you fill reach 5/5 on the meter in the top left of the screen. Alternatively, you can pay to start the bonus feature.

Knowing how to win on Marching Legions is not possible, and this is because, as with all other reputable slots, this game is controlled by a random number generator. This RNG causes every spin to be completely random, so you’ll never be able to predict how the symbols will land next. Therefore, whether you win the Marching Legions jackpot is completely down to luck.

The Marching Legions RTP is an incredible 98.12%, which is far higher than the average RTP found at online slots. The return-to-play figure means that you can expect to win back, on average, 98.12% of money you bet. You must remember however that the Marching Legions RTP is an average, therefore some will win far more than this, while others won’t manage to win anything at all.

Take a look at the table we’ve created, which contains all the important pieces of information about this game, such as how much you can bet and what its volatility is. If you still can’t decide whether to play after looking at the table, you should try the game for free on this page. You can then play for real money at an online casino if you enjoy the free game.