Dragon Sisters is a Push Gaming slot that brings us a great rivalry story immersive graphics and captivating gameplay.

In the world of online slots, there aren’t many themes more common than dragons, and this is exactly the theme you’ll find when you play the Dragon Sisters slot machine. Don’t let this put you off playing this slot though, as Dragon Sisters from Push Gaming is a superbly original casino game, offering loads of fun and, perhaps more importantly, the chance to win some huge prizes!
On this page, we’re going to provide an in-depth review of this great slot, plus we’ll also give you the chance to play free Dragon Sisters slots, allowing you to experience all the fun this game has to offer, without risking any money. If you want to play Dragon Sisters online for real money though, you’ll find it offered at some of the fantastic online casinos we recommend.

In this Dragon Sisters review, we’re going to look at this slot from every angle, going through the bonuses, prizes and much more. Once you’ve finished reading through our detailed Dragon Sisters slot machine review, you’ll be more than ready to start spinning the reels of this top game!

First of all, we’re going to look at the theme of this slot. It won’t come as a surprise to find out that this slot is based on two sisters, both of whom have their very own dragon. One is an ice dragon, while the other is a fire dragon, meaning the game sounds very similar to a certain popular TV show! The graphics at this slot are pretty basic, however the fantastic soundtrack really adds something to the playing experience.

Although there are two sets of reels – something we’ll come to later in this Dragon Sisters review – each set uses roughly the same symbols. The only difference is the fact that the top set has the fire dragon and its master, while the bottom set has the ice dragon and its master. The symbols are tough to see, especially on smaller screens, and don’t look too impressive, however it’s important to remember that slots aren’t just about the graphics!

The minimum you can bet at this slot is $0.25, which should be low enough for most players. Those looking to play for micro-stakes will have to find a different slot machine though. The maximum bet is $100, which should be high enough for all but the biggest spenders. The paylines at this slot are fixed, so you can’t increase or decrease the number of them to change your bet amount.
To alter your bet amount, just click the up arrow at the bottom of the screen. You can then click on the bet size you want to place. There is no need to do this before every spin of the reels, as the game will remember how much you previously wagered and continue to use the same amount until you decide to change it.

The first special feature of this slot is pretty obvious – it has two sets of reels! Each reel has 25 paylines, making this a game with 50 paylines. In general, the reels don’t interact with each other, so it’s essentially like playing two separate games at the same time, which is a fun approach to online slot machines.

The two sets of reels only interact when a dragon lands on one of them. If you get the red dragon on the top set of reels, you’ll find that the bottom set of reels gets a free respin, with a stacked set of wilds added to the reel that corresponds with the one the dragon landed on. A blue dragon on the bottom set of reels leads to a respin on the top reels, with up to three wilds randomly placed on the reels.
That’s all when it comes to bonuses at this slot. Don’t worry that there aren’t that many bonuses on offer, as this game still manages to provide loads of excitement!

So, what is the maximum amount of money you can win at this slot machine from Push Gaming? Well, initially it doesn’t sound that impressive, as the maximum win per payline is just 15x your bet. This doesn’t stop the game from offering big prizes though, as it’s possible to get wins on multiple paylines on every spin. Get loads of jackpot symbols on the reels (these are the red and blue sisters, as well as the wild symbol), and you could find yourself winning thousands.

Is Dragon Sisters Worth Playing and Who Should Play It?

Dragon Sisters is a slot everyone should definitely try playing, as it offers a huge amount. There are big prizes on offer, as well as two exciting respin features, however the biggest reason to spin the reels of this slot from Push Gaming is simple: the game has not one, but two different sets of reels! This essentially means that you’re playing two slot machines at the same time!
Many people might think this slot is for experienced players, however it’s actually suitable for everyone. This is because, despite the slightly daunting first impressions, it couldn’t be easier to play. The game is suitable for bankrolls of all sizes too, as it has a low to medium volatility. This means that the game should pay out smaller prizes on a regular basis, meaning that your account balance shouldn’t fluctuate too wildly. 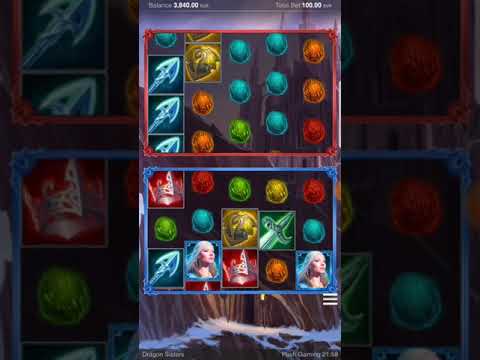 Want to find out how to play Dragon Sisters ? If so, you’ll be glad to know it’s a really simple game. Just choose how much to bet and then spin the reels. Both sets of reels will spin and you’ll win a prize if you get three or more identical symbols on consecutive paylines, starting from the left reel. Get a dragon on the reels and you’ll receive a respin, with wilds placed on the reels. There is no second screen Dragon Sisters bonus game. Any money you win is paid to your casino account automatically.
Some players are constantly looking for a way to guarantee prizes when playing slots, however there are no ways to beat slot machines. This is certainly the case when it comes to Dragon Sisters . Instead of trying to find out how to win on Dragon Sisters , you’ll just have to accept that the game is completely random and that there’s no way to guarantee that you’ll win the Dragon Sisters jackpot.

The Dragon Sisters RTP is particularly impressive, as it comes in at 96.73%. This is high when compared to most other online slot machines and means that the game gives you a better chance of winning money than the majority of other slots out there. For those who don’t know, RTP stands for return-to-player and tells you how much money a slot will pay back over an extremely long period of time. The higher the number, the better the game is for players.

Below you’ll find a quick summary of all the important things you need to know about the Dragon Sisters slot machine from Push Gaming. Once you’ve taken a look at the summary, why not spin the reels of Dragon Sisters for free to see how much you enjoy playing the game?

Other slots from Push Gaming

Play now
Gems of The Gods

Play now
Turn It Up