Humpty Dumpty is a Push Gaming slot which is classic, straightforward, yet enjoyable.

There aren’t many rhymes more famous than Humpty Dumpty , which tells the story of a poor egg taking an unfortunate tumble off a wall. Push Gaming have taken this tale and turned it into a slot, and it’s regarded by many as one of the top Push Gaming slots to have ever been created. We’re not going to argue with this, as the Humpty Dumpty slot manages to deliver on every level.
As well as providing you with a comprehensive review of the Humpty Dumpty slot, we’re going to also let you play free Humpty Dumpty slots, which will allow you to decide whether this game really is the right choice for you. If you really enjoy it, you’ll then be able to head off to an online casino and play Humpty Dumpty online for real money. Hopefully you’ll win the massive jackpot when you do!

We’ve created the ultimate Humpty Dumpty slot machine review – a review that covers every important aspect of the game, from the theme through to the bonus rounds. So, sit back and find out about this superb game from Push Gaming…

Humpty Dumpty Theme
The first thing to look at in this Humpty Dumpty review is the theme, and the name of the game kind of gives it away. It’s based on the famous nursery rhyme of the same name and features all the main characters. It’s a really enjoyable theme with superb cartoon graphics, as well as jaunty music that adds an extra sense of fun.
The symbols are made up of characters from the song, including the king, his men and their horses. While you’ll see them quite often, you won’t spot Humpty Dumpty that much, however he will eventually turn up, sitting on top of his wall. As with many slots, playing card values are used for the lower value symbols, however they look great and fit well with the theme.

Betting Options
As with most slots, it’s possible to alter the amount you bet at Humpty Dumpty . The lowest you can possibly bet is $0.25 per spin, which equates to $0.01 per payline. The maximum bet is $100, which is $4 per payline. The more you bet at this game, the more money you’ll have the chance of winning. You can’t adjust the number of paylines at this slot.
To alter the amount of money you bet per spin, just click the arrow to the right of the “Total Win” box. You will then be presented with a number of stakes, and you simply have to choose the one that best suits your budget.

Bonus Features
There are two special symbols to look out for during the base game, and the first is the gold pair of spoons. This is the wild symbol and will substitute for all other symbols, except the scatter. The scatter is Humpty Dumpty himself and only appears on the third reel. The symbol is expanded and can cover the entire reel – manage to do this and the free spins bonus feature will start.
During the free spins, you’ll be trying to collect hearts. The heart symbol can appear on any of the middle three reels and when you’ve collected three on one reel, that reel will turn completely wild for the rest of the bonus feature.
The other bonus to mention is the Falling Wilds Respin feature. Whenever a wild symbol lands on the reels, you’ll be paid for any wins as normal. You’ll then receive something like a respin, which sees all reels staying in place, except the reel with a wild symbol on it, which will move down one position. Get another wild symbol on the reels while the feature is active and it will also start moving down one position on every respin. This continues until there are no wilds on the reels. This feature is active during both the base game and the free spins.

Humpty Dumpty ’s Maximum Win
The maximum you can win on a single payline at the Humpty Dumpty online slot is 20x your total bet. Therefore, those betting at the highest stakes of $100 a spin could win $2,000. This doesn’t sound like much when compared to some other slots, however don’t worry, as you’ll have the chance to get multiple wins on every spin, as this slot has 25 paylines. What’s more, the expanded wilds during the free spins, as well as the Falling Wilds Respin feature, can also lead to you winning many different prizes on a spin.

Is Humpty Dumpty Worth Playing and Who Should Play It?
Humpty Dumpty is definitely a slot that’s well worth playing, for a number of different reasons. The theme is a fun one and the game looks great, both of which contribute towards a really enjoyable playing experience. You’ll also find that the potential prizes are great, plus, as you’ll see shortly in this Humpty Dumpty review, the Humpty Dumpty RTP is higher than average. The bonus features are also fantastic and provide loads of excitement when they’re activated.
Humpty Dumpty is a slot that should be enjoyed by the vast majority of players, regardless of whether they’re new or experienced. Those looking to bet big will be happy to see a maximum bet of $100, while those wanting to bet small amounts should be fine paying $0.25 a spin. Those looking for a slot that fires out small, regular wins might want to head elsewhere though, as Humpty Dumpty is a slot with high volatility, meaning you might not win very frequently. When wins do come though, they can be particularly large. 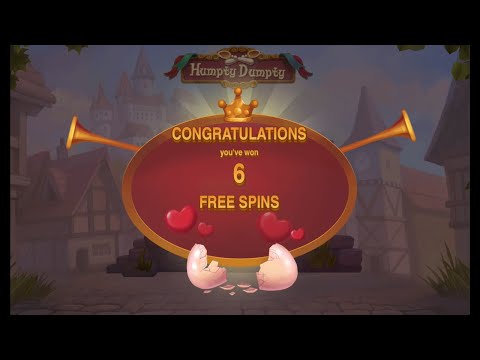 Looking to learn how to play Humpty Dumpty ? If so, you’ll be glad to find that it’s really simple. Just select how much money to bet and then spin the reels. There’s then nothing else for you to do, as you’ll just need to wait for the reels to stop spinning and then see if you’ve managed to win a prize or start a Humpty Dumpty bonus game. If you win a prize, the money will be added to your casino account automatically.
As with all online slots, Humpty Dumpty is completely random, with the result of every spin determined by a complex algorithm. There is no way to influence how the symbols fall, despite what some people might say. Therefore, there is no point trying to find out how to win on Humpty Dumpty . Instead, just accept that you’ll only win the Humpty Dumpty jackpot if you’re lucky!

If you’re looking for a slot with a high RTP, look no further than Humpty Dumpty . This is because the Humpty Dumpty RTP is an impressive 96.47% – the average RTP in the world of online slots is approximately 95.50%. The RTP of 96.47% means that, on average, the game will pay back $96.47 for every $100 spent on it. Of course, you’re not guaranteed to win exactly that amount of money back though, as some will win the jackpot, which will have to be balanced out by others losing money.

Below, you’ll be able to see all the important Humpty Dumpty statistics and features, giving you a quick rundown of everything you need to know about this slot from Push Gaming. The best way to find out about the Humpty Dumpty slot is this though: load up the free version offered here at ManySpins and spin the reels for a while! If you like playing, you can then progress to playing it for real money at a top online casino.

Other slots from Push Gaming

Play now
Gems of The Gods

Play now
Turn It Up