Visitors is an ELK Studios slot that that brings players one of the best storylines from visitorrs far beyond the earth dimension.

ELK Studios have cleverly merged a couple of popular themes to great effect with their Visitors slot machine, resulting in a colorful, likeable game that will appeal to everyone. Once you start to play Visitors online, you’ll quickly find yourself at the centre of an alien invasion. However, the extra-terrestrials in this game often come bearing gifts in the form of cash rewards, so it’s well worth getting to know them.

For many of us, seeing the tranquil peace and quiet of a typical Midwest town shattered by a battalion of flying saucers for the first time can take some getting used to, but we’ve got a demo version of this outstanding game for you to try so you can enjoy as many spins as you want on free Visitors slots before taking the plunge and playing for real. If you like the game, you can then play Visitors online for real money at one of our chosen casinos.

Once you’ve read our Visitors review, you’ll have a far better idea of what to expect and can then decide if you’d like to play for real. We’ve carried out an in-depth analysis for you, so you’ll be able to make your mind up very quickly and get playing with minimal delay.

Visitors Theme
This game’s designers clearly had fun when devising this slot. It’s played against a farmland backdrop complete with river, windmills, fields and wind turbines. The reels echo this in part with a variety of traditional houses being the higher paying symbols at this slot.
The less valuable poker symbols are styled around a garden, each with its own stone wall. These lend the graphics a more rugged, Flintstone-style feel – however, the walls play an important part in the game once you reach the bonus round. Which, incidentally, is where the flying saucers make an appearance and the gameplay changes dramatically. We’ll get to the bonus features soon in this Visitors slot machine review!

Betting Options
Click the stack of coins to the left of the reels and you’ll be offered twelve different bet levels. These are all the actual amounts you’ll wager with each spin; you aren’t making a bet per line as all lines are always played, making it easier to decide how to progress. Amounts range from $0.20 to $100, with something to suit all players in between

Once you’ve decided how much to bet, you can also select a betting strategy if you wish. Elk’s team have made it very easy for you to play if you have a particular system you tend to use, and the choices you’re given here cover just about any commonly used method. It’s important to remember that using a system doesn’t boost your chances of winning though.

Bonus Features
Firstly, you’ll find that this slot has a wild symbol, which is pretty easy to spot. This can substitute for all other symbols, except the Bonus and Respin symbols, helping you to create winning combinations.

Then there’s the Respin feature, which starts when you get a respin symbol on both the first and fifth reels. This sees you getting a free respin, which will incorporate two of three special features. Get the Big O Beam feature and a large 2×2 or 3×3 sticky symbol will appear on the reels, while getting the Abduction feature sees a multiplier applied to anything you win. Finally, get the Alien Attack feature and you’ll find sticky wilds being added to the reels.

There’s also a free spins bonus, which starts when you get three Bonus symbols on the reels. You’ll initially get five free spins, however you’ll win an extra free spin every time a spaceship lands. Before the free spins, each of the 25 symbols turns into a mini reel. On these mini reels, you’ll only find silver spaceships, gold spaceships and blank spaces.

Get a silver spaceship on a mini reel and you’ll win your stake, plus the symbol will be walled off. Any further silver ships landing in that position will then have a multiplier applied to their prize, and this multiplier doubles every time a silver spaceship lands on the space. Get a gold spaceship and all multipliers will be doubled.

It’s important to understand the walls found during this bonus. As you play, vertically adjacent walls are connected, causing larger areas on the reels to be walled off. All the spaces within a wall have the highest multiplier applied to them. For example, connecting a space with a 128x multiplier and another space with a 256x multiplier would see both spaces becoming 256x multiplier spaces. It is admittedly a pretty complex bonus round to explain, however it can lead to some huge prizes.

Visitors Maximum Win
There’s a top prize of $1 million on Visitors , which puts it light years ahead of most of its competitors. This can be won during the superb bonus round. The highest possible combination per payline on the reels is 15x your bet, which is won when you manage to get five wild symbols on any payline.

Is Visitors Worth Playing and Who Should Play It?
Anyone can enjoy this game, from newbie players through to experts. With no line selection required it’s easy to get started, and the jolly, instantly likeable sound and visuals will put you at ease. The bonus rounds do come with some complexity, but you can sit back, relax and let Elk’s software take care of everything for you, as any bonus round wins are automatically added to your casino account.
Visitors will also appeal to players who are sick of seeing the same tired slots themes used again and again. There are plenty of games featuring farms and animals – and many more featuring aliens and flying saucers, but you’ll struggle to find anything that combines the two. Elk have done it seamlessly, making for a pleasurable experience with every spin. 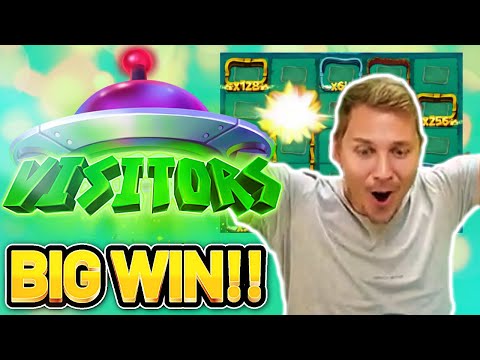 You can learn how to play Visitors very easily. Once you’ve clicked the stacked coin symbol and selected your bet amount, you can use the Spin button to get the reels moving. The auto-play button lets you set 10, 25, 50 or 100 spins if you wish, saving you from having to spin yourself.

This game is formatted using a random number generator so it’s impossible to give instructions on how to win on Visitors . The larger prizes come during the Visitors bonus game though. During this bonus game, you can win the slot’s top prize.

The Visitors RTP figure is 96.10%, meaning that there’s a return to player of $96.10 for every $100 wagered. This, of course, is an average figure – it’s what a typical player can expect in a typical session. What you may or may not win will vary every time you play – which is what makes games like this one so much fun.

If you’re thinking about playing Visitors for real money, you can use the table below to see how it measures up to similar slots you might be considering playing. Every aspect of the game that you’ll need to know about to make an informed decision is covered.