The Grand Galore is an ELK Studios slot that captures the heart of players with its realistic mechanism and rewarding gameplay.

Nothing makes for a more relaxing experience than a classy, laid back gemstone-themed slot – and when you play The Grand Galore slot machine, you’ll be treated to all the upmarket sheen you could possibly want. Open it up and start playing you’ll instantly enter a world of fine dining, trips to the spa, top-of-the-range cars and bespoke outfits – only you’ll be able to play The Grand Galore online, so you won’t even need to get dressed up to enjoy the fun.

Needless to say, hitting the casino on an expensive night out doesn’t come cheap and once you decide you want to join the jetset you’ll need to start making real money wagers – but in order to test out this stunning game we’ve arranged for you to be able to play free Grand Galore slots. You can then decide whether you want to make a deposit and join the other high rollers for real.

If you’re unsure whether you’d like to try this online slot, make sure you read our Grand Galore review. We’ve carried out a thorough analysis of all its features, controls, theming and gameplay, so that you can evaluate it in just a couple of minutes.

The Grand Galore Theme
In keeping with the very best, most iconic stylings found in five-star establishments around the world this slot has been sparingly designed, with a refreshingly unfussy feel. Set against a Vegas casino entrance backdrop, the reels contain carefully-rendered sapphires, rubies and emeralds – though the most valuable symbol is the ruby-encrusted lion’s head, which differentiates this game from the multitude of similarly-themed slots on the market.

This game also has another trick up its sleeve that makes it stand out: the soundtrack. It’s not often that we assess a game with the soundtrack permanently left on, but when writing The Grand Galore slot machine review, we couldn’t help but listen to it for hours. Its mellifluous, jazzy tones will whisk you off to your favourite piano bar as soon as you start playing, saving you from having to put your own soundtrack on.

Betting Options
Elk’s flexible, easy-to-use system makes it simple to get started. Once you’ve clicked the coin stack symbol to reach the betting options screen you can choose from 12 different bet levels ranging from $0.20 to $100. From there you can also scroll right if you wish, to bring up four different strategy options. These automatically adjust your bet levels depending on what sort of risk profile you like to use, and there’s something to suit most players among the choices offered.

Bonus Features
The Grand Galore ’s basic structure alone is something of a bonus feature, as it offers 4,096 ways to win. That’s down to its 6-reel, 4-line all-ways betting structure. Essentially, any route across this grid from left to right counts as a winning line, so as long as you’re lining up symbols in adjacent columns from left to right it doesn’t matter which row they appear on.

Get a win while playing this game and all reels featuring a winning symbol will expand by one row, before you get the respin. Win again and you get another respin, with even larger reels – the larger the reels, the more extra ways to win will be activated. It’s possible to get up to 10 rows during this feature! What’s more, respinning symbols next to each other on a reel will always stop on the same symbol.
You could also find that two or more neighboring reels could sync with each other on any respin. This means that the synced reels will all show exactly the same symbols. Get all five reels synced and you could find yourself winning a huge prize!

There’s also a free spins bonus feature, which starts when you get three or more Bonus symbols on the reels. The number of free spins you receive depends on the number of symbols used to start the game.

Every fifth win in the bonus game triggers a Grand Synced Respin. The first time you get this, the middle reel will be expanded by one row for every winning spin, while the second time will see both reels four and five increase in size by one row after each win. Every subsequent Grand Synced Respin sees reels four, five and six expanding. As in the base game, it’s possible to get up to 10 rows on a reel during the free spins.

The Grand Galore Maximum Win
There’s a top prize of $1 million on The Grand Galore , which makes a lot of sense. It’s a high roller-themed game after all, so a decent win really ought to mean you can dramatically change your lifestyle for good. It’s possible to win this top prize thanks to the respin feature, which can lead to loads of winning combinations appearing on the reels at the same time. The highest payout per payline is 5x your bet.

Is The Grand Galore Worth Playing and Who Should Play It?
Thanks to its timelessly simple visual theming and universally appealing soundtrack, this is one game that will prove popular with everyone. With a low minimum bet level, you can join in the fun even if you don’t want to spend too much, though if you do want to win the maximum million-dollar prize you’ll need to bet the maximum.

The Grand Galore will prove particularly appealing to anyone wanting to escape from the drudgery of everyday life and live like royalty for a few hours. On a tactical level its reel structure will be a draw for anyone who likes a large number of ways to win, as this slot can offer up to 8,000 ways to win. 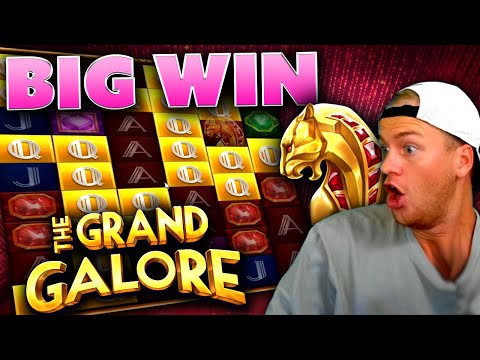 Once you’ve set your bet level you can hit the Spin button without even needing to return to the main screen, and from there you can set the autoplay function to give you 10, 25, 50 or 100 spins without needing to hit the Spin button at all. Between this and the strategy options you could, in theory, sit back and enjoy a session without knowing how to play The Grand Galore at all.

This game comes with a stately return to player statistic of 96%. The Grand Galore RTP measures up well against the competition, as there’s an average RTP of around 95.50% at other slots. For those who don’t know, the return-to-player of a slot tells you how much you can expect to win back, on average, while playing. There is no way to increase The Grand Galore RTP.

We’ve compiled a table so that you can compare this game with similar online slots and make a decision about whether you’d like to play. All the important points are covered, so you don’t need to waste valuable playing time deciding if The Grand Galore is what you’re looking for.