White Rabbit is a Megaways slot from Big Time Gaming: there are up to 248,832 ways to win!

Get ready to get lost down the rabbit hole when you play the fantastic White Rabbit Megaways online slot from Big Time Gaming. Based on the Alice in Wonderland story, this game takes you down the rabbit hole to a wonderful world. This slot can have a maximum of 16,807 ways to win during the base game, and even more during the free spins feature. It also has a feature drop available so you can choose when you start a bonus round by buying it. Why not find out more about the White Rabbit Megaways slot machine by reading our detailed review below?

Not interested in spending your time reading our slot review? If not, then no problem, as we’ve got a quicker way for you to find out about this game. You can play free White Rabbit Megaways slots here on this site, which allow you to experience all the features of the real money game, but without spending any money. If you like the game, you can then head off and play White Rabbit Megaways slots online at a casino.

As already mentioned, this is a slot game based on the classic tale of Alice in Wonderland. The game looks absolutely amazing and you’ll see a whole variety of characters on all the reels, including the Cheshire Cat and the White Rabbit. A falling animation is displayed of you falling through the rabbit hole as it replaces the background. The background is stunningly designed, giving you a glimpse of the mysterious Wonderland, plus the audio really contributes towards the overall enjoyment of the game.

When it comes to the symbols, you’ll find loads of the characters from the game spinning around on the reels. The different characters look amazing and cover half a reel when they land. The standard 9-A symbols aren’t that interesting and don’t add to the look of the game, however, that’s only a small complaint and won’t spoil your playing experience.

The minimum possible bet per spin at the White Rabbit Megaways slot is just $0.10, which should be low enough for nearly all players. The maximum bet really isn’t very impressive though, as it’s just $20. This will cause those looking to place higher bets to head elsewhere. As is pretty much always the case, the more you bet, the more money you could find yourself winning.

It really couldn’t be easier to adjust the amount of money you bet per spin at the White Rabbit Megaways slot game, as you simply need to press the left or right arrow underneath the “Stake” field. Once you have chosen how much money to bet, the game will remember it, so you won’t need to adjust your bet amount before every spin.

The first feature to mention is the wild symbol, which is pretty easy to spot and covers half a reel when it lands. It can appear on all reels except the first and will substitute for all other symbols, except the scatter symbol, the cupcake feature. the feature drop symbols and gold coin symbol.

Next up, you’ll find the random caterpillar wilds feature. At any point, the caterpillar wilds feature could add up to four bonus wilds to the reels. These aren’t normal wilds though, as they have a 2x or 3x multiplier attached to them, thus why they call them bonus wilds. As you can probably imagine, this can lead to some huge prizes, especially if there are loads of ways to win active.

You’ll also find scatter symbols on the reels, which are the White Rabbit symbols. These appear on the second, third and fourth reels only and getting three on the reels will see you awarded 15 free spins. During the free spins, you’ll find cupcake symbols on the reels. Get a cupcake symbol on a reel and it will turn into two symbols, but more importantly, the reel will increase in height by one symbol. It is possible to get reels that are 12 symbols high during the free spins feature. When this happens, it becomes a Queen’s reel, which is a more enhanced reel that turns up more wilds and red queen symbols. Get all reels to their maximum height and you’ll have a huge 248,832 ways to win!

Whenever you manage to get one of the reels to its maximum height during the free spins, you’ll find that the feature is retriggered, giving you another 15 free spins. Also, the reel will turn into the Queen’s Reel, which is an enhanced reel containing more Queen of Hearts symbols and wild symbols.

Don’t fancy waiting for the free spins to start? If so, you can buy the feature using the option to the right of the reels. The price of the feature starts at 100x your bet but will go down every time you land a gold BTG coin on the reels. The larger the coin symbol, the more the price of the feature will reduce by. When the price gets to zero, the feature will automatically start. It should also be mentioned that any coin landing on the reels will disappear as it’s collected and will be replaced by another symbol.

The maximum you can win from one combination at this online slot is just 25x your bet. Don’t let this put you off playing though, as in reality, you can win far more than this, as it’s possible to get loads of winning combinations on one spin, thanks to the huge number of ways to win. The potential to win big prizes only increases during the free spins, when the reels can be up to 12 symbols high. The wild multipliers placed on the reels by the caterpillar can also increase prizes as well.

Is White Rabbit Megaways Worth Playing and Who Should Play It?

Yes, White Rabbit Megaways is definitely a slot that’s worth playing, for a number of different reasons. The bonus features, particularly the free spins, are fantastic, plus the game looks stunning and the prizes can be huge. Perhaps most importantly though, every spin is exciting, thanks to the ever-changing number of ways to win you’ll find on the reels.

This game might be slightly confusing for new players though, due to the variable number of symbols on a reel, so we’d probably say this is a game best suited to those who already have an understanding of how slot games work. The game has a medium to high volatility, meaning that the amount of money in your casino balance could fluctuate wildly, as wins don’t come too often, but can be huge when they do arrive. Those with smaller balances might instead prefer to play a slot machine with a lower volatility. Are you ready to have your own adventure? 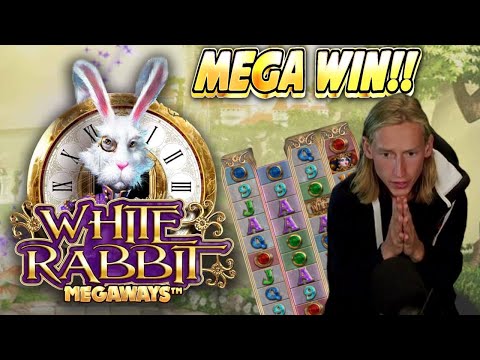 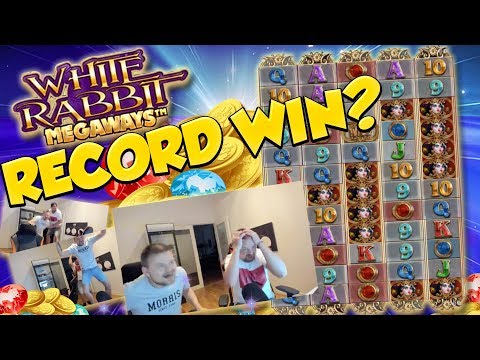 Before you can spin the reels, you’ll first need to choose how much to bet. Once you’ve picked your bet size, click the play button and get the reels spinning. When they stop, you’ll see if you’ve won a prize or started a White Rabbit Megaways bonus game. Any money you win will be added to your casino balance automatically. If you want, you can autoplay a set number of spins by clicking the button with the circular arrows and altering the number of spins. The more symbols per reel, the more Megaways and ways to win. You can also set a loss limit for the autoplay feature, as well as a single win limit.

If you’re looking for how to win on White Rabbit Megaways, you’ll be disappointed to find that there’s no magic trick to guaranteeing prizes when you play. This means that whether you win the White Rabbit Megaways slots jackpot or any other prize is completely down to chance. So, don’t bother trying to find ways to win, and instead, just enjoy the slot games’ random gameplay.

Get ready to be impressed, as the White Rabbit Megaways RTP is a huge 97.72%, meaning that its RTP is well over the average for online slots. RTP stands for return-to-player and tells you how much the game will pay back over an extremely long period of time. So, over this period, which can be millions of spins, the game will pay back 97.72% of all money spent on it. The White Rabbit Megaways slots RTP is yet another reason why this slot is such a good one.

Take a look through the table to quickly find out everything you need to know about this fantastic online slot machine from Big Time Gaming, including how much you can bet and what the volatility of the slot is. You can then start spinning the reels of this slot for free, right here on this page, to see if you enjoy playing it!

Other slots from Big Time Gaming