The Final Countdown is a Big Time Gaming slot with 4096 winning ways and a top prize of 36000x.

The Final Countdown was a blockbuster song released by Europe, the Swedish rock band in the late 1980s. Understandably the song is not as popular as when it first came out and this perhaps was what moved Big Time Gaming to immortalize it via its Final Countdown slots. Good for them we say!

The Final Countdown slot machine follows closely behind Danger High Voltage and is the second slot with a rock music theme that the folks over at Big Time Gaming have put together and released so far. Big Time Gaming choose the option of packing its Final Countdown slot with features and so bettors should not be all that surprised to hear that this 6 reel and 4,096 ways to win slot has cloning reels and cloning winds, plus win multipliers that reach to 888x and a couple of Free Spins features. Yes, this is one slot that pulls no punches, as players will shortly find once they click on the Spin button!

Wins here max out at 36,000x the stake and this in company with the rad graphics and audio could make players go gaga! Big and beautiful as it is, you can play Final Countdown slot for free here on our site and get your final countdown towards big-time fame and fortune ticking! Or you can opt to do one better and play Final Countdown online and with real money at any recommended online casino that promises to spoil you silly with bonuses and loyalty rewards! Get to playing now and add some hardcore thrills to life as we know it!

This part of The Final Countdown slot machine review will concern itself with all gameplay aspects, like the bonuses, bet sizes, theme, and more. This means that once players are done reading this Final Countdown review, they will be on very familiar terms with this slot and be able to rattle off a long list of pertinent information if so asked.

Final Countdown Theme
The Final Countdown slot machine is based around the iconic song of the same name, with the theme being sci-fi/music-oriented. Flashy graphics are the norm here, with a rocket sitting on a launchpad at the left of the reels, while the right corner of the screen is occupied by a stage of some sort. The background shows a city landscape, while spotlights at the top corners of the reels help keep everything in view lit up. This scene changes during the Free Spins bonus.

On the screen are a host of familiar icons. These include playing cards and gemstones, with the latter making up the high values. Special icons include wilds and scatters. There are 2 wilds -a male and female astronaut- and these appear as a single icon during base gameplay and play differing roles in the Free Spins bonus. The scatter for its part is represented by an image of a golden tile on which are inscribed “FC”.

Overall, while this is not the first music and/or sci-fi themed slot to hit the market, we do think that Big Time Gaming deserves a pat on the back, with their Final Countdown slots likely to exceed the expectations of most players in just about every aspect..

Betting Options
The betting range here is so low that an ant could clamber onto it and hitch a ride! Bets cost from 0.20 to 20.00 coins, which is surprising for a slot of this caliber. Such a bet range is bound to be good news for low rollers, though news of it is likely to put big bettors into a foul mood that could last all week!

Here as in other slots, bet adjustments are made with the + and – buttons that are on the screen. With the aid of these buttons, players can bet exactly how much they wish, with a final click on the Spin button to get everything rolling along nicely!

Bonus Features
There does appear to be more bonus features in The Final Countdown slot then there’s moon dust on the moon! The first of these bonuses is the Cloned Reels feature and it can be randomly activated both during base gameplay and the Heading for Venus spins. During the Cloned Reels, up to 4 reels become synchronized, with icon combos being cloned across these reels.

The next bonus is Cloned Wilds. This is triggered during the Cloned Reels feature by the appearance of the wild icon on any cloned reel. Wild icons that appear on the cloned reels expand, with this expansion varying according to the number of cloned reels. Here, 2×2, 3×3, and 4×4 cloned wilds bring along with it win multipliers of 4x, 27x, and 256x the stake respectively.

Up next is the Free Spins bonus. This can be brought to life by landing 3 and up of the scatter icon anywhere on the reels. Players will then have to pick from any one of the two available free spins features and these are the Countdown Free Spins and the Heading for Venus free spins.

In the first of these Free Spins features, players get 8 free spins, with 2×2 wilds -showing the lady astronaut- roaming all over the reels. Extra free spins are available here by landing extra scatters and the more the free spins are re-triggered the bigger will be the wild and the multiplier associated with it, with a maximum multiplier of 256x being available.

In the Heading For Venus free spins, 156 free spins are made available, plus cloned reels. During these free spins, Velocity wilds -featuring the male astronaut- make an appearance, and these boast multipliers that vary depending on the size of these wilds, with the minimum being 4x and the maximum being 888x.

Final Countdown Max Wins
Max wins in The Final Countdown slot machine are pegged at a stupendous 36,000x the stake and this happens during the Free Spins bonus round.

Is Final Countdown Worth Playing And Who Should Play It?
The Final Countdown slot is assuredly worth spending time with. It packs a lot of color and loads of features, plus some thrilling audio effects. With bonuses aplenty, max wins of 36,000x the stake, and gameplay mechanics that thrill to the bone, this slot is everything that a must-play slot should be!

The kind of bettors who will find this slot riveting are those who like music-themed slots equipped with an embarrassment of features and rad payout rates. Also, low rollers will find this slot to be a blast, as it is oriented towards their style of play, with the bet limits being what they are. 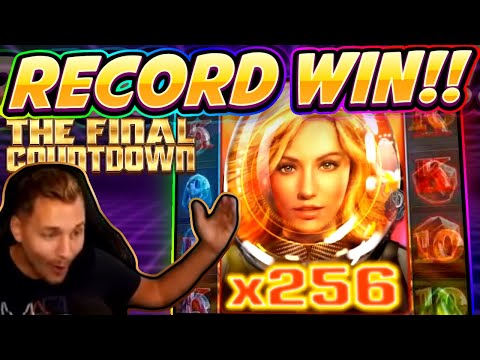 While it is among the most feature-packed slot that Big Time Gaming and anyone else has out in the public domain, The Final Countdown jackpot slots is still refreshingly easy to play. Yes, learning how to play Final Countdown jackpot slots shouldn’t take players any more than a minute or two, which means they get to dive at mach speed into one of the best slots in existence and reap bushels of rewards!

The gameplay here can proceed at an easy or rapid pace as players prefer. The onscreen buttons make the placement of bets easy, while the pay table lists the worth of each icon and the process of triggering the many features this slot comes packed with. A brief check of the paytable is worthwhile, as it shows how every Final Countdown bonus can be triggered, while offering insight into all aspects of gameplay procedures.

No tips on how to win on Final Countdown slots exist. Any information to the contrary is as false as a 3 dollar bill. Slots like The Final Countdown slot machine have a Random Number Generator that randomizes all gameplay outcomes and renders all gameplay prediction ineffective. Thus, predicting wins and losses is fruitless, with luck ruling over everything, including the base game.

The term RTP refers to the return-to-player percentage and this is derived from results gained after simulating millions and even billions of spins. The return-to-player serves to show how much of all bets made that players will get back following a very great number of spins.

The following table provides a quick reference source on The Final Countdown slot machine. Study the table below and you will find all manner of pertinent information.

Other slots from Big Time Gaming