Pink Elephants is a Thunderkick slot where you enjoy interesting powerups that rewards massively.

Given its name you could be forgiven for expecting the Pink Elephants slot machine to be a garish, childlike experience, and whilst a cartoon-style approach has been taken with the visuals you’ll realise as soon as you open up this lovingly crafted game that a huge amount of thought and talent has gone into its development.

To help you get used to the extraordinary winning possibilities on offer we’ve laid on unlimited spins on free Pink Elephant slots for you. You can jet off to the Serengeti any time you like, relax to the sound of jungle drums and get a feel to play Pink Elephants online at one of the many great casinos offering this top game from Thunderkick.

A great way to begin your adventure on this game is by reading our Pink Elephants slot machine review in full. You’ll then be kitted out with all the ammunition you need to take it on for real. There’s a fair bit to get your head round, so it’s well worth being fully up to speed before aiming your sights on some trophy-standard cash prizes.

Pink Elephants Theme
Pink Elephants is set against a dynamic African plain background complete with trees and fireflies buzzing around, and a stirring, bongo drum-laden soundtrack that plays whilst you spin. The soundtrack somehow manages to be both relaxing and invigorating at the same time and whilst researching our Pink Elephants review, we did feel compelled to leave it switched on at all times.

When it comes to the symbols, you’ll find a family of meerkats on the reels, with different members used for the high paying symbols. However, the pink elephant is the highest paying symbol of all. The lower paying symbols are the playing card values, which have been designed to fit nicely with the theme, unlike at many other online slots.

Betting Options
The least you can bet per spin at the Pink Elephants slot is just $0.10, which should be low enough for most players. At the other end of the scale, the maximum bet per spin is $100, which is about average for an online slot machine. As experienced players will know, the more money you bet, the more you could find yourself winning.

You can access stake options via the poker chip symbol near the Spin button or by clicking the current bet, both of which will take you to a choice of 14 different bet amounts. Just click on one of the values to select how much you want to bet. Your bet will remain at that level throughout your time playing, until you decide to change it.

Bonus Features
Much of Pink Elephants ’ appeal lies in its amazing betting line structure. Rather than give you specific, marked routes across the reels that qualify as paylines, this slot simply requires you to match symbols on adjacent reels, no matter which row they appear on. Any route, therefore, from left to right, is a winning payline. It would take a long time to do the math, but the clever folk at Thunderkick have done it for you and there are 4,096 ways to win.

The fun doesn’t stop there, though: Land 3 or more peanut symbols and you’ll trigger a free spins round with 3,4,5 or 6 peanuts awarding you 7, 11, 15 or 19 spins, respectively. You could also land one to five Mystery Scatter Symbols during the base game, which could boost your chances of starting the bonus feature.

Should you land 2 or more peanuts whilst your free spins are taking place then even more freebies will come your way, with 2,3,4,5 or 6 peanuts awarding you 3,5,7,9 or 11 games on top of your existing spins.

During the free spins, you’ll notice the four meerkats on the left side of the screen. Whenever an elephant with an orb lands on the reels, the meter around one of the meerkats will fill slightly. Fill a meter entirely and all symbols of that specific meerkat will turn into elephant symbols, plus you’ll receive an extra free spin. Fill all four meters and you could find an entire herd of elephants on the reels, leading to a huge prize!

Pink Elephants Maximum Win
Land 6 Pink Elephants on consecutive reels when playing at the maximum stakes of $100 per spin and you’ll receive a thunderous $1,000 win. This might not sound like a lot, however there’s no need to be concerned, as there’s a chance to win multiple prizes per spin. This means that the top prize is actually much more than $1,000.

Is Pink Elephants Worth Playing and Who Should Play It?
Pink Elephants is most definitely a slot that’s worth playing. The huge number of ways to win ensures that excitement remains high at all times, while the theme is an interesting one that adds loads of enjoyment to the playing experience. The return-to-player of 96.10% is another reason why this slot is one that’s worth playing.

Given its huge number of ways to win and its state-of-the-art visuals and sound we wouldn’t hesitate to recommend this game to anyone. If you like 4,096-way games like WMS’s Raging Rhino and Playtech’s Buffalo Blitz then you’ll love it, though this is a more visually impressive game with a more sophisticated bonus round. 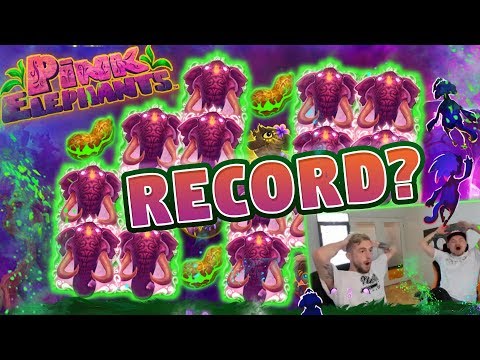 You can learn how to play Pink Elephants fairly quickly, even though there are thousands of ways to win. Once you set your bet level, simply use the Spin button to get going, or use the Autoplay function to give yourself anything from 5 to 5,000 games without needing to spin manually. You’ll win a prize if you get two/three or more identical symbols on consecutive reels, starting from the first reel. You could also start the Pink Elephants bonus game if you’re lucky.

Knowing how to win on Pink Elephants , however, is rather more difficult, as it uses an approved random number generator. Your next bonus game could be just a few spins away, with a gigantic Pink Elephants jackpot waiting to be emptied into your wallet – it’s anyone’s guess if and when that’ll happen, and it’s the unpredictable nature of games like this one that keep players coming back for endless, top-notch slots entertainment.

There’s a return-to-player figure of 96.10% at this game, which compares well with other online slots. The Pink Elephants RTP is a mean average that you can expect to win in a typical session, though, so do bear in mind that in reality your returns can and usually will be more or less than this percentage. There’s no way to change the Pink Elephants RTP.

We’ve carried out some thorough research on this slot, and you can check out the results in the table to help you decide if you’d like to play. After finding the information you need, you should load up the game on this page and play for free, or alternatively head to an online casino and play Pink Elephants online for real money.

Other slots from Thunderkick

Play now
Riders of the Storm