Great Rhino is a Pragmatic Play slot that is a dangerous, wild, feral and vivid African safari.

Trips abroad don’t get more exotic or exciting than a full-scale safari expedition, and Pragmatic Play are offering to whisk you off to the Southern African plains to try and win some big game when you play their Grand Rhino slot machine. You won’t, however, be shooting down any endangered species when you play Grand Rhino online – instead, you’ll be aiming your sights on some premium cash prizes.

Big prizes mean big challenges, and there’s lots to get your teeth into with this game, so we’ve arranged for you to play free Great Rhino slots for as long as you need to. That way you can familiarise yourself with all its bonus rounds and have a good idea of what to expect before you go the whole hog and start playing for cash.

The best way to get to grips with this monster of a game is by reading our Great Rhino slot machine review. We’ve spent many hours finding out all about it so that you can get playing with minimal delay.

Great Rhino Theme
There’s a beautifully designed Serengeti backdrop used to frame this online slot, and the imagery used on the reels matches it perfectly with lots of earthy, sunset tones and bold, animated characters. It’s clearly been inspired by games like Mega Moolah and Raging Rhino, and the best aspects of those – and other similar games – have been used to great effect here.

In addition, the visuals are a perfect match for the optional soundtrack, which offers up soothing, relaxing tones during the base game and then heats up alongside the action when the bonus rounds kick in. When we put our Great Rhino review together, we made a point of leaving the sound on at all times, which is often a tell-tale sign that you’re playing a truly memorable online slot.

Betting Options
The minimum that you’ll be able to bet on a single spin when playing Great Rhino is $0.20, which should be low enough for pretty much everyone. The maximum bet is $100, which will be high enough for all but the biggest spenders. You won’t be surprised to hear that the more money you bet per spin, the more money you could win.

Great Rhino has 20 paylines, and you’ll play all of them by default, so there’s no need to make a selection. To change how much you bet, just click the plus or minus button either side of the spin button. You can then set your bet amount using the “Coins Per Line” and “Coin Value” fields, or simply set your overall bet using the “Total Bet” field.

Bonus Features
Your scatter symbol in Great Rhino is the impressive-looking tree with a sunset behind it. Spin 3 of those anywhere on the reels and you’ll get 10 free spins. At this point the rhino symbol becomes wild, and a special set of new reels come into play, dramatically altering the winning possibilities on offer.

The rhino symbol, though, comes into its own when you land 2 or more full stacks of them in the base game. You’ll then have triggered the incredible Super Respin round. At this point any full stacks of rhinos on the screen will stay put and remain for the duration of the round.

You’ll be given 3 respins to start off with, and the reels will be stripped of all symbols except rhinos. As long as you manage to spin at least one rhino every 3 respins, you’ll be given 3 more respins, and all subsequent rhinos that appear will also become sticky – which potentially means you can fill up the whole screen with rhinos. If you do, you’ll win the Grand jackpot. If you don’t quite manage all 15, don’t worry: 14 will net you the Major Jackpot, which is fixed at 375 times your total bet. Anything under 14 on the reels will see you winning the combined value of all winning combinations.

Great Rhino Maximum Win
Hitting the maximum win on this game will require you to set your bet level to the maximum $100 per spin, trigger the Super Respins round and then land a rhino on all 15 available positions on the reels. Doing this will see you win 500x your overall bet, which equates to an impressive $50,000 when playing at the highest stakes.

Is Great Rhino Worth Playing and Who Should Play It?
Our session on Great Rhino was wildly entertaining and we loved every second of it. It has a little more going on than most large-scale, big game-themed slots and consequently held our interest more than we’d have expected. What’s more, it has two fantastic bonus symbols, plus the prizes on offer can be incredibly large.

If you enjoy going after big prizes but don’t want to pay progressive jackpot slots, then you’ll love this game. It’s also a great introduction to sticky wins if you’ve never experienced them before. The game’s medium volatility makes it suitable for most players, while the RTP of 96.48% should satisfy those who only play slots that give a better-than-average chance of winning. 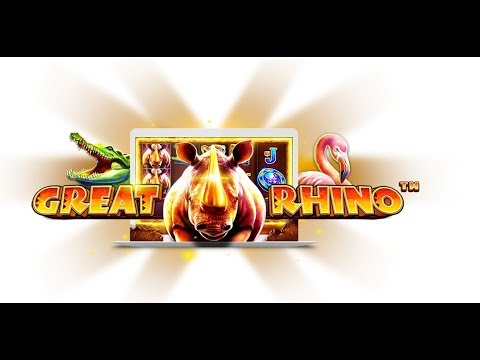 At this stage, you’ll no doubt want to know how to play Great Rhino . Thankfully it’s very easy: Just choose your bet level and use the main Spin button to get going. Alternatively, you can use the Autoplay options below it to pick the number of spins you require. This option also lets you choose upper and lower limits to help you manage your bankroll safely. You’ll win a prize after the reels stop spinning if you get a winning combination. You could also start a Great Rhino bonus game.

Knowing how to win on Great Rhino , though, isn’t something we can teach you. The game uses random number software to make every spin impossible to predict, which is what makes it such fun and keeps players coming back for more. There’s no way to alter the outcome of any spin, so stop looking for how to win and instead just enjoy the randomness of the game.

Great Rhino comes with a return-to-player (RTP) figure of 96.48%, so you can expect, on average, to win $96.48 for every $100 you bet. The Great Rhino RTP measures up very well against other games you’ll find at online casinos, so we wouldn’t hesitate to recommend it. Don’t search for a way to alter the Great Rhino RTP, as you won’t find one.

You can quickly compare Great Rhino to any other games you might be thinking of trying out by using the table we’ve created. This will give you all the information you could possibly need before committing to real money play. Got the facts and figures you need? If so, it’s then time to start spinning the reels of this superb slot from Pragmatic Play!