Great Rhino Megaways is a Pragmatic play slot with sharp mechanics that presents players with a lot of easy ways to win.

Great Rhino is an exceptionally popular slot. However, it has now been improved even further, thanks to the addition of the amazingly enjoyable Megaways feature, which was first developed by Big Time Gaming. Now you can expect to find huge numbers of ways to win when you play, as well as the Tumble feature. The result? A game that pretty much everyone should love playing – especially if they manage to win the top prize, which is worth 20,000x your bet!

The name of this slot gives away the theme, as it’s about… rhinos! Behind the reels you’ll see exquisite African savannah stretching away into the distance, beneath a pristine blue sky. The reels themselves are made from wood and tribal spears, which looks fantastic, while the controls are to the bottom of the reels.

On the reels themselves, you’ll find all manner of African creatures, including cheetahs, gorillas and, of course, the rhino itself. The lower paying symbols are playing card values, as you’ll find at many online slots. However, these playing card symbols are far from boring, instead exhibiting beautiful African designs.

The least you can bet per spin at Great Rhino Megaways is $0.20, which means most can afford to play. The most you can bet when the bet booster is turned off is $100. When you turn it on, the maximum possible bet is $125 per spin.

To change the amount of money you’re betting, simply click the plus or minus arrows either side of the spin button. This will then bring up the options to adjust the bet, coin value and total bet – the simplest option is to just change the latter field. As with nearly all slots, the more money you bet, the more money you have the opportunity to win.

The first feature to mention is the Megaways feature, which was initially developed by Big Time Gaming and is now licensed to many software providers. This feature means that anything from two to seven/eight symbols will appear on each reel on each spin. This varying number of symbols on the reels means that the number of paylines also changes on every spin. Get the maximum number of symbols on each reel and you’ll find a giant 200,704 ways to win available to you!

You’ll also find a free spins feature at Great Rhino Megaways, which starts when you manage to get four or more scatters, which are the gold coin symbols, anywhere on the reels. Your chances of starting the free spins will improve if you take the option to boost your bet, which adds 25% extra to the cost of a spin. You can also buy the free spins feature for 100x your bet size.

Before the free spins start, you’ll be able to choose a combination of free spins and starting multiplier. The game will then start and will work in the same way as the base game, except for one important factor: you’ll have the multiplier added to every win that spins into view. This multiplier will increase by 1x every time the Tumble feature happens, meaning you could end up with a huge multiplier! Get three or more scatters on the reels during the feature and you’ll win more free spins.

The most that can be won on a single spin of the reels at Great Rhino Megaways is 20,000x your bet. This means that players spinning the reels for the maximum of $100 per spin could find themselves winning a huge $2,000,000! The highest paying symbol on the reels is the cheetah – you’ll win 50x your bet if you manage to get five on a payline. Remember that only the standard bet is multiplied when you win – any money spent boosting the bet does not get multiplied.

Is Great Rhino Megaways Worth Playing and Who Should Play It?

Great Rhino Megaways is most definitely a game worth playing, as it takes an already popular slot and makes it even better! The Megaways feature ensures that every spin of the reels is exceptionally exciting, plus the free spins are huge amounts of fun. However, the prizes are the main reason to play, as they can be ginormous!

This game is best suited to those who already have a little experience playing slots, as the Megaways feature can make things a little confusing for new players. It’s also fantastic for those who enjoy playing animal themed games. Finally, it’s a great choice for fans of high volatility slots, as this game doesn’t pay out too often, but when it does, the prizes can be very large. 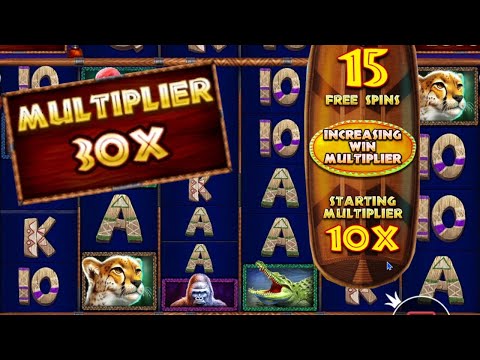 How to Play and How to Win

Working out how to play Great Rhino Megaways isn’t too tough. You’ll need to first choose how much to bet, and then decide whether to boost the bet and increase your chances of starting the free spins. You then spin the reels and will win if two/three or more identical symbols land on consecutive reels, starting from the first reel. You could also start the Great Rhino Megaways bonus game on any spin – or you could spend some money and buy the feature.

Unfortunately, it’s not possible to work out how to win on Great Rhino Megaways. This is because the game is controlled by a random number generator, which causes every spin to be a random one, which you can’t influence. Instead of trying to work out a way to guarantee winning the Great Rhino Megaways jackpot, just enjoy playing and celebrate whenever you’re lucky enough to spin in a win.

The Great Rhino Megaways RTP is 96.48%, but it rises to 96.58% if you decide to use the option to boost the bet. Whether the small change to the Great Rhino Megaways RTP makes boosting your bet worth it is down to personal preference. For those who don’t know, the return-to-player is a figure that tells you how much money the average player will win back while they’re playing a game.

Looking to quickly find out about a feature of this online slot? If so, take a look at the table we’ve created, which tells you everything from the game’s jackpot to its volatility. Once you’ve found what you’re looking for, it’s time to start playing the game. You can spin the reels for free on this page, or alternatively, you can play for real money at an online casino.