Lucky Leprechaun is a Microgaming slot that has a quirky, mischievous, cheeky Irish vibe with cartoony leprechauns.

If you’re a regular slots player, you’ll know that Ireland, and the famous luck associated with it, is a really popular theme with software providers. Microgaming’s Lucky Leprechaun is another slot with this theme, however it manages to differentiate itself from the rest by having exceptionally exciting gameplay and a huge top prize.

On this page, you won’t just find a detailed review of Lucky Leprechaun – you’ll also find that you can play free Lucky Leprechaun slots, giving you the chance to test out the game without risking any of your own hard-earned cash. Enjoy playing? If so, you can then head to an online casino and play Lucky Leprechaun for real money. Hopefully you’ll win some money when you do!

Lucky Leprechaun Theme
As already mentioned in this Lucky Leprechaun review, this slot has an Irish theme. You’ll find that the background is a simple depiction of rolling Irish hills, while the Lucky Leprechaun logo is found above the reels. There’s a simple set of buttons to the right of the reels. As you play, you’ll hear jaunty Irish music, while only adds to the theme.

You’ll find various symbols related to the Emerald Isle spinning around on the reels. Unsurprisingly, the leprechaun can be seen on the reels, as can a fiddle, pints of Guinness and a pipe. The highest paying symbol is the Lucky Leprechaun logo though. The lower value symbols are simple playing card values, each of which has a subtle Irish design to it, ensuring it fits nicely with the theme.

Betting Options
The lowest possible bet at this slot is $0.20, which should be low enough for the majority of players. On the other end of the scale, the maximum bet is $90 – not the highest we’ve ever seen, but still high enough for most. It won’t surprise experienced players, however we’ll still say it anyway: the more you bet per spin, the more money you could win (alternatively, see our article on how to win huge on slots).

To alter your bet size, just click on the pile of coins, found just above your bet amount. You can then use a slider to choose how much to bet, or alternatively click the bet size you want to make. There’s also a “Max Bet” button, for those knowing they want to bet the most money possible. You only need to select your bet size once, as the game will remember how much you want to bet on all subsequent spins.

Bonus Features
Firstly, you’ll find that this slot has a wild symbol, which is the game’s logo. This symbol can substitute for all other symbols, except the four-leafed clover and pot of gold symbols. Unlike at some other slots, the wild symbol at Lucky Leprechaun doesn’t have a multiplier attached to it, however it does come stacked on the reels.

The first of the two main bonus features to mention is the free spins, and these start when you manage to get the four-leafed clover symbol anywhere on the fifth reel – something that will also lead to you receiving an instant cash prize worth 1x your bet. You’ll receive five free spins initially, however you win an extra free spins every time a playing card value with a green four-leafed clover attached to it appears while the feature is active.

Then there’s the Trail O’Fortune Bonus, which starts when you manage to get three or more pot of gold scatter symbols anywhere on the reels. You’ll be taken to a trail and will get four, five or six spins, depending on whether you activate the feature with three, four or five scatters, respectively. The size of the prizes on the trail also increase with the more symbols you use to start the feature.
Spin the wheel to move along the trail. Get an emerald and you’ll win an extra spin of the wheel, while land on a rainbow bridge and you’ll move ahead several squares. Once you’ve run out of spins, you’ll be paid your prize, which can be up to 1,000x your bet.

Lucky Leprechaun ’s Maximum Win
The maximum prize at this online slot is $500,000, which can be won when playing at the maximum stakes of $100 per spin. This prize is won when you manage to get every position on the reels filled with wild symbols, while you also have a 5x multiplier, which can only be done during the free spins. The most that can be won from a single payline in the base game is 50x your bet, which is $5,000 for those playing at the highest stakes. This is won when you get five wild symbols across a payline.

Is Lucky Leprechaun Worth Playing and Who Should Play It?
Lucky Leprechaun might have a commonly used theme, and it also might not look as spectacular as some other slots, however it’s still definitely a game that’s well worth playing. The two different bonus features are great fun, however the main reason to play is the massive top prize, which is worth $500,000 to those playing at the highest stakes.

The Lucky Leprechaun slot is suitable for pretty much everyone, as there’s a wide range of different bet sizes, plus it has medium volatility. This medium volatility means you should get reasonably regular wins, helping to ensure your balance doesn’t drop too quickly. It’s also a good choice for those who like playing slots with higher RTPs, as this slot’s RTP of 96.33% is higher than average. 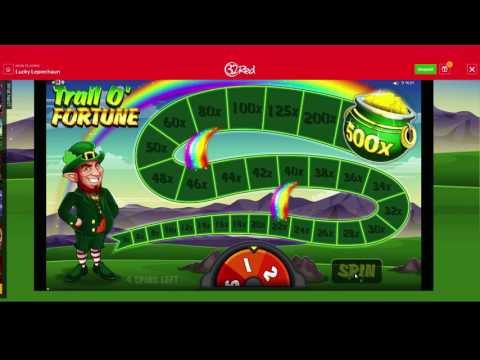 Working out how to play Lucky Leprechaun is simple, as it plays like most other slots out there. Just choose how much to bet and then spin the reels. You’ll then win an instant cash prize if you get a winning combination of symbols on the reels. You could also start a Lucky Leprechaun bonus game – there are two of them and both offer some potentially huge prizes.

Looking to find out how to win on Lucky Leprechaun ? If so, we’re here to tell you that there’s no way to increase your chances of winning money. The game runs using a random number generator, which randomly selects the symbols that land, and there’s nothing you can do to influence it. So, accept the game is random and just hope you can win the Lucky Leprechaun jackpot.

The Lucky Leprechaun RTP is 96.33%, which compares well to other slots out there. For newer players, RTP stands for return-to-player and tells you how much money, on average, the slot will pay back. So, the average player of Lucky Leprechaun will win back 96.33% of their money. This is only an average though, as some will win thousands, while others won’t win anything. There’s no way to alter the Lucky Leprechaun RTP.

Check out the table we’ve created to quickly find out everything from this slot’s volatility, through to how much money you could win. Once you’ve looked at the table, it’s time to play the game, either for free here on this page, or for real money at one of the many top casinos offering this superb game from Microgaming.