Sushi Slot is an Endorphina game for those food lovers into Japanese cuisine.

There are quite a few online games themed around everyone’s favourite Japanese snack, but Endorphina’s Sushi slot machine has the edge in terms of style – and features some tasty gameplay on top. Just like the dish it’s named after, it also offers up the occasional surprise – not with unexpected spicy ingredients, but with a couple of exciting gameplay elements that give this game a lift just when you’re least expecting it.

What’s more, by opting to play Sushi online you can enjoy a taste of Japan without paying over-the-top deli prices, and you might also win some hard cash when you do – and there are no tricky chopstick techniques to learn either…

Read our Sushi slot machine review in full and you’ll rapidly discover whether this impressive game is to your taste or not. Try the real thing and you might get an unwanted mouthful of eye-watering wasabi, but Endorphina’s expert design team have steered clear of any nasty surprises – they’ve just made sure it’s exciting, stimulating fun at all times with some great prizes on offer.

Sushi Theme
In a word, this game’s design is all about taste – by which we mean the visual sort. Laid out on a bamboo mat you’ll find 3 rows and 3 columns of snacks, with each symbol comprised of two identical motifs. Don’t be confused by this: They’ve been doubled up purely for visual purposes, not because of any added complexity. You are playing a simple, 3 row, 3 reel game here. You’ll find wasabi shoga, tabiko shake, maguro tabiko and more on the menu, and no: We didn’t have a clue what any of that means either! Not, of course, that it’ll stop you from winning.

There’s also a VIP card, which doubles as your scatter symbol. In a word, it’s sparing – just like you’d expect from the best cuisine and culture offered by the Land of the Rising Sun.

Betting Options
The minimum that can be bet per spin at this slot is just $0.01, however this is only possible when you have one payline active. The maximum overall bet is $50, which will be enough for everyone other than the biggest spending players. As with nearly all slots out there, those looking to win the biggest prizes will have to make the biggest bets.

To choose how much you bet, you’ll first need to select how many paylines to have active, which is done by clicking the relevant number to the side of the reels. You can then use the circular red “Credits” button in the top left of the screen, as well as the “Bet” and “Total Bet” boxes, to adjust your bet. Overall, the bet adjustment process is a little overly complicated.

Bonus Features
As you’d expect for a game with just a maximum of 5 paylines, the designers here have gone for a minimalist approach and kept the feature play as unfussy as possible. Land three or more scatter VIP cards and you’ll launch the free spins feature, which gives you 20 free games.

You may, after looking at the paytable, be wondering why there’s no wild symbol in this game – but in fact there is. The scatter symbol also acts as a wild symbol during the free spins round, substituting for all symbols except itself. That may seem a little odd, but the idea is that during free spins this symbol is there to help you make payline wins, not trigger more free spins. It has two defined roles, depending upon which part of the game you’re playing. It’s actually a rather neat way of reducing complexity and after trying it we were surprised that more games don’t work this way.

The fun doesn’t end with the free spins round, however: Waiting for you after every single line win you make in Sushi is a Gamble feature. It’s a turning card-style game, loved by millions of devoted players the world over and a guaranteed adrenaline pumper every time. You’ll be shown an upturned dealer’s card with 4 cards next to it all face down. You’ll then be asked to choose one of them with the aim of beating the dealer – which you can do up to 10 times if you repeatedly guess correctly. Every time you guess correctly, your prize is doubled, but guess incorrectly and you’ll lose everything you’ve just won.

Sushi Maximum Win
There’s a maximum prize per payline on offer here of $50,000, obtained by spinning five wasabi shoga symbols on an active payline, followed by 10 winning turns of the card during the Gamble feature. It’s not the largest prize we’ve ever seen offered at an online slot, however you’ll still be pretty excited if you manage to win it!

Is Sushi Worth Playing and Who Should Play It?
The simplicity is the main attraction, however the RTP of 96.00% is also a top reason to play, as it’s higher than average. It’s not worth playing for those looking to land the biggest prizes around though, as the top prize of $50,000 is far lower than those found at many other slots, especially progressive slots with prizes worth millions.

We based this Sushi review on the results of a lunchtime session and found that it was an undemanding experience that’s perfect for a work break or a few crafty spins when you’ve got a few minutes to burn. Beginner players will also love the simplicity of its 5-payline structure and uncluttered visuals.
##### 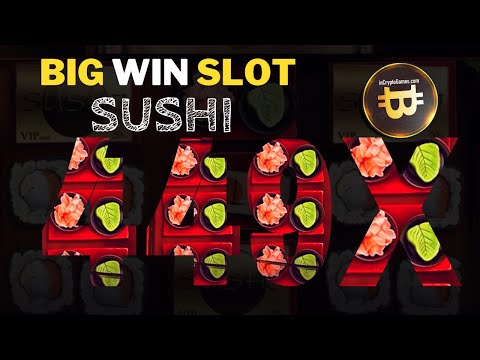 Learning how to play Sushi couldn’t be simpler. You’ll get the hang of it with just a few spins, and you can even let the software do the spinning for you if you prefer. Simply click the menu button, select autoplay and you’ll be offered options to set play for a specified number of rounds or set a time limit when play must stop. Alternatively you can set a maximum balance so you can stop automatically when you reach your desired level of winnings, or set a minimum balance so you won’t lose any more than you’d wish.

And now the big question: How do you win on Sushi? If only that were as beautifully simple as the game itself! However, like any online slot it uses random number generating software to decide what symbols end up appearing on the paylines, so there’s no magic formula for winning the Sushi jackpot or ensuring that you regularly land enough scatter symbols to trigger the Sushi bonus game. We can, though, guarantee that you’ll have endless fun – with the possibility of winning some tidy sums in the process.

Sushi offers a return-to-player (RTP) level of 96.00%, which means that you’ll receive a typical payout of £96 for every £100 you bet. The Sushi RTP measures up well against other slots found at online casinos, so you should have a higher-than-average chance of walking away with some money when you play. Don’t try to find a way to alter the Sushi RTP, as there isn’t one.

Take a look at the table and you’ll instantly be able to see how Sushi stacks up against comparable slots. All the important points are dealt with, making it simple and easy for you decide whether you’d like to give it a try. If you do want to play, you can spin the reels for free on this page, or for real money at an online casino.

Other slots from Endorphina

Play now
The Rise Of Ai

Play now
4 Of A King