Book of Santa Slot is an Endorphina game for the paddies who like their slots whimsical, jolly and distinctively Irish.

Slots experts will, of course, be very familiar with the legendary Book of Ra slot from Novomatic, and Book of Santa has clearly been inspired by it. Endorphina have made sure that the gameplay is very similar and just as exciting, so when you choose to play Book of Santa slots online you’ll get a very similar experience to the original – but with added yuletide sparkle to make it even more entertaining.

If you’re familiar with Book of Ra but want to learn more about Endorphina’s festive take on the game, or have never played either game and just want to know if you’ll enjoy it, then don’t worry: We’ve arranged for you to play free Book of Santa slots whenever you like, so you’ll be fully familiarised with everything it has to offer before you discover the joys of playing for real money.

There’s no need to wade through volumes of ‘how to’ guides before getting stuck into this particular book: Just read our Book of Santa slot machine review and you’ll find out everything you need to know. There’s only one chapter and it’s nice and short!

Book of Santa Theme
Many Xmas-themed slots are an assault on the eyes, but Endorphina’s team have resisted the urge to go down that route. They’ve gone for a brick fireplace with some discreet candy canes separating the reels. Symbols include Santa, his sleigh, stars, bells and – of course – the all-important book. You probably won’t be reading this Book of Santa review unless you’re interested in that book above all else – so do keep reading and we’ll tell you all about it shortly.

Generally speaking, the dark, comforting background of the fireplace will remind Book of Ra players of the earthy tones used behind the reels in that game, which we suspect is no accident. The theming here, though, makes no reference to Ancient Egypt, Indiana Jones or anything else non-Christmassy. It’s an honest creation, inspired by the success of a much-loved game and borrowing, rather than stealing from it.

Betting Options
Looking to only bet a tiny amount on every spin? If so, Book of Santa could be the slot for you, as it offers a minimum bet of just $0.01. The most that can be bet on a spin is $50, which won’t be enough to get the biggest spenders excited, but should be more than high enough for everyone else. The more you bet, the bigger the potential prizes are.

Before you set the amount you bet, you’ll have to choose how many of the 10 paylines to have active, which is done simply by clicking the “Lines” box underneath the reels. You can then use the two boxes to the right of the “Lines” box to adjust your bet amount. You’re then ready to start the reels spinning!

Bonus Features
Most of the action in this game revolves around Santa’s favourite bedtime read. Exactly what’s in this leather-bound book is anyone’s guess: It could be a guide to the world’s best chimneys or a seasonal special edition of What Sleigh? – all you need to know is that it’s your wild and scatter symbol combined in this game, so if you land 3 of them anywhere on the reels at any point, you’ll be given 10 free spins.

At this point a symbol will be chosen at random, and when the selected symbol appears enough times to make a winning combination all appearances of that same symbol expand to cover the whole reel that they appear on. This often means some huge wins, making you feel like it’s every Xmas Day of your entire childhood rolled into one.

As with most Endorphina games, the fun doesn’t stop there: Any payline wins will come with the chance to boost your winnings with a Gamble feature. This is entirely optional, and you can quit at any point. You’ll be shown a playing card face up, and then asked to choose from 4 cards facing down, with the aim of beating the dealer. Each time you win your win will be doubled, and you can do this up to 10 times in total. Guess incorrectly though and everything you’ve just won will be lost.

Book of Santa Maximum Win
Santa himself is the most valuable symbol, so five of him anywhere on the reels nets you a maximum possible payline win, which is 500x your bet amount. This is equal to $25,000 for those playing at the highest stakes. This prize can then be increased even further using the Gamble feature, if you’re brave enough to risk thousands of dollars on the turn of a card!

Is Book of Santa Worth Playing and Who Should Play It?
Book of Santa is certainly a slot worth playing. Among the crowd of Christmas themed slots, this one stands out, thanks to its great looks and cozy Christmas feel. The prizes are also exceptionally impressive, plus you should really enjoy playing the exciting free spins bonus game. The RTP of 96.00% also makes this game one that’s worth playing.

Anyone familiar with Book of Ra and its spin-off games will instantly choose this as their favourite yuletide treat. Alternatively, you may just want a decent Xmas-themed slot and find that most games in that category are a bit too dumbed-down to offer any real excitement. This one, however, most certainly isn’t. 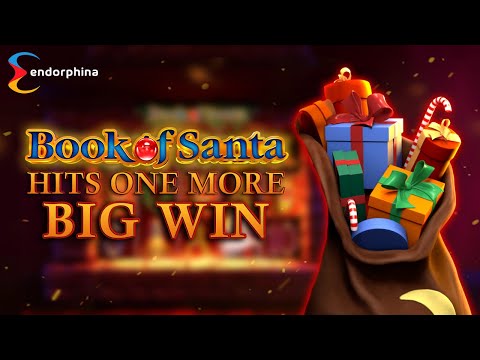 Learning how to play Book of Santa couldn’t be simpler. As soon as you’ve set your bet level you can choose to play one game at a time by pressing the main Spin button repeatedly, or choose from various autoplay options instead. If you want to maximise the number of games in any session, the turbo feature cuts down the time it takes to spin the reels. Get a winning combination on the reels and you’ll win a cash prize. You could also win loads of money if you manage to start the Book of Santa bonus game.

You will, of course, be more interested in knowing how to win on Book of Santa. That, though, is mostly in the hands of fate as the game uses random number generating software – so knowing exactly when the next Book of Santa jackpot is due to appear isn’t possible. Its unpredictability, though, is what makes it so much fun!

There’s a return-to-player (RTP) level of 96.00% on Book of Santa. Simply put, the Book of Santa RTP means you can typically expect a $96 return on every $100 you gamble – although this is only an average, and some will win, while others will lose. Compared to similar games the Book of Santa RTP measures up well, though it is worth being aware that the Gamble feature has its own RTP of 84%. The Gamble feature’s low RTP means that most experienced players will avoid it.

Use our table to compare Book of Santa with other games you might be thinking of trying out, so you can easily see how it measures up in every respect that matters. Once you’ve finished looking through the table, you can play the game for free on this page, or spin the reels for real money at one of many top online casinos.

Other slots from Endorphina

Play now
The Rise Of Ai

Play now
4 Of A King