Primal Hunt is a Betsoft slot designed for the lovers of fast-pace, bringing some old-school hunting action in a unique style.

Take a trip back to the Stone Age when you play the Primal Hunt slot machine from Betsoft. This 80-payline game offers all players the chance to win over 4,400x their bet, which is amazing, however even those who don’t win the jackpot will enjoy playing, thanks to the great graphics and the exceptionally exciting gameplay.

On this page, you’ll find a complete review of this slot, but that’s not all we offer, as we also give you the chance to play free Primal Hunt slots. You can play for free to find out if you enjoy the game, and if you do, you can then play Primal Hunt online at a top online casino. Hopefully you’ll win some huge prizes if you do decide to play for real money!

If you’re looking for a complete overview of this Betsoft game, keep on reading. Our Primal Hunt review will cover everything from the bonus games through to the amount of money you can win, and once you’ve finished reading, you’ll be more than ready to play this superb slot.

This slot has a Stone Age theme, with the main protagonist of the story being a fearsome saber-tooth tiger. It’s a theme that has been used before, however the Betsoft game is a cut above the rest, offering superior graphics and a better playing experience. The audio has a tribal feel to it which works well with the Stone Age theme.

On the reels, you’ll find a number of Stone Age symbols. The saber-tooth tiger is represented by two different symbols, however there’s no symbol showing Stone Age man. You will find a couple of crude weapons though, as well as cave art. The lower paying symbols are the playing card values, which actually fit with the theme, which isn’t always the case at other online slots.

Those looking to play Primal Hunt for low stakes will find that the minimum bet per spin is $0.20. This should be okay for most, however those looking to play for micro stakes will need to look elsewhere. High stakes players probably won’t find themselves playing this game, as the maximum bet is just $22 – many other online slots give players the chance to bet hundreds of dollars on every spin.
To alter your bet amount, just use the plus and minus buttons to scroll through the different options until your preferred bet size is highlighted. There’s no need to do this before every spin, as the bet size will remain the same throughout your time playing the game, unless you decide to change it. As is nearly always the case, bigger bets will lead to bigger potential prizes.

Firstly, it’s important to mention that this slot has a wild symbol, which really won’t be very difficult to spot on the reels. This symbol can substitute for all other symbols except the saber-tooth tiger scatter and will help you to make winning combinations. You’ll find that the wild symbols are stacked on the reels, leading to the possibility of you filling an entire reel with wilds – something that could lead to a significant prize. All other symbols can also appear stacked on the reels.

During the free spins, you’ll find that wild symbols have a 2x or 3x multiplier attached to them, which can boost your winnings significantly. What’s more, get more than one multiplier as part of a win and they’ll multiply each other. For example, get a 3x multiplier and a 2x multiplier in a winning combination and your prize will have a 6x multiplier added to it.

As already mentioned in this Primal Hunt slot machine review, the most that can be won from a single combination during the base game is 96x your bet, which happens when you get five scatter symbols on the reels. The actual maximum win is much higher than this though. In fact, according to Betsoft, the most that can be won is a massive 4,420.3x your bet, which equates to $97,246.60 when playing at the highest stakes. This prize is made possible by the 80 paylines and the potentially huge multipliers during the free spins.

Is Primal Hunt Worth Playing and Who Should Play It?

There can be no doubting the fact that Primal Hunt is a slot that’s well worth playing, and this is for many reasons. The theme is an exciting one and the graphics really make every spin enjoyable. What’s more, the overall gameplay is really fun. Most importantly though, this game gives you the chance to win some absolutely massive prizes, with the maximum prize being an impressive 4,420.3x your bet!

As already mentioned, those looking to play for the very lowest stakes won’t find what they’re looking for at this game, nor will those looking to play for high stakes. The majority of people are somewhere in the middle though, and for them, Primal Hunt is a great choice. The game has a medium to high volatility, meaning it suits those who are comfortable with the fact that they could win or lose money pretty quickly. Those not comfortable with this should find a slot with lower volatility. 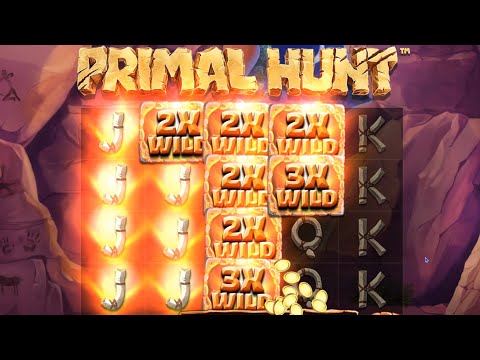 Those looking to find out how to play Primal Hunt will be happy to hear that the game is really simple. Before spinning the reels, you’ll need to choose your bet amount, however there’s no need to choose how many paylines to have active, as the paylines at this slot are fixed. You then simply spin the reels by hitting the large circular button and wait to see if you’re lucky enough to win a prize or start the Primal Hunt bonus game.

We say something similar to this in pretty much every slot review, but it’s important to reiterate it: there is no way to alter your chances of winning the Primal Hunt jackpot. Don’t listen to anyone who says they know how to win on Tribal Hunt or any other online slot, as they’re either misinformed or simply lying. Instead, accept the randomness and enjoy playing the game.

The Primal Hunt RTP is an above average 96.10%, meaning that you’ll have a better chance of winning at this slot than at the majority of others out there. RTP stands for return-to-player and it’s a figure that lets you know how much a game will pay back over an exceptionally long period of time. Don’t think that you’ll win back the exact Primal Hunt RTP though – some players will walk away with more money than they started with, while others will find themselves losing money instead.

Check out the table to find out some of the most important pieces of information about the Primal Hunt online slot, such as how much you can bet and what the most you can win is. Finished looking at the table? If so, you should now start playing Primal Hunt for free here on this page, or for real money at a top online casino!

Other slots from Betsoft