T-Rex is a Realtime Realtime Gaming which takes players to the wild dinosaur jungles to deliver an adventure of a lifetime.

Who isn’t fascinated by dinosaurs? When it comes to natural history, the giant lizards that roamed the earth for millions of years were bigger, more exotic, and way more dangerous than anything you’ll find on Planet Earth nowadays. All of which goes to explain why the human race never seems to tire of books, movies, t-shirts and cartoons themed around them – and it was only a matter of time before the online gaming industry got in on the act, notably with Real Time Gaming’s T-Rex slot machine.

This monster of a game didn’t take millions of years to evolve, and it’s definitely not about to become extinct. Play T-Rex online and you’ll instantly see why it’s going to be around for generations to come as you unearth and explore its impressive range of features – and if that sounds like too much to do with your own funds, there’s absolutely no need to worry. Thanks to our demo game you’re allowed to go back to the land that time forgot by playing free T-Rex slots whenever suits you and get to know the exhilarating features and characters that make this game such a thrilling adventure – without risking a penny of your own cash.

Once you’ve read our T-Rex slot machine review, you’ll be desperate to jump back in time and get face to face with the gigantic creatures inhabiting the lush, volcanic South Pacific island that serves as the setting for this extraordinary slots challenge. You’ll need to be fully informed to get the best from your sessions, so do make sure you read to the end before you start spinning.

T-Rex Theme
Real Time Gaming have sensibly resisted the temptation to try and create anything too realistic. Instead, you’ll find far more rustic stylings used, featuring rough-hewn granite designs that would look more at home in an episode of The Flintstones, though there’s ultimately nothing cartoonish about this game – as the rest of our T-Rex review will go on to explain.

Betting Options
There’s a wide range of bet levels on offer when you play T-Rex . Play the absolute minimum stake and you’re looking at just $0.01 per spin, which equates to $0.01 per line. There are 25 lines in total and you can choose to play any number of them. With all 25 enabled it’s possible to wager up to $125 on a single spin, which equates to $5 per payline.

Setting the bet level couldn’t be simpler: Once you’ve used the Lines button at the bottom of the screen, you can set your bet per payline, which will cause your total bet to automatically change. Once you’ve reached a bet level that suits you, it’s time to spin the reels. You only need to set your bet amount once, as the game will remember it for all other spins in your playing session.

Bonus Features
The gigantic, all-conquering T-Rex isn’t the only dinosaur you’ll meet in this game: The triceratops and stegosaurus icons both lead to healthy wins as well if you can line up 3 or more of them lined up on an active payline. However, the best-known dino of them all is given a status that befits his reputation, as it acts as a wild symbol, plus any winning combinations that use it pay double.

However, you really haven’t played this particular game until you’ve triggered the free spins round, as it’s quite unlike anything else you could compare it with. Land 3 of the egg symbol and you’ll activate this feature, but you won’t be taken straight to it. Instead, you’ll start with a ‘pick me’ style round, where you’ll be asked to select the eggs used to start the feature. You’ll reveal up to 10 free spins per egg.

Once your free games commence, the function of the T-Rex symbol becomes fully apparent. At this point it appears on reel 3 and will gobble up any other dinosaurs that appear anywhere on the screen. This may seem a little extreme, but in fact this carnivorous display will benefit you considerably, as any creatures that he eats will be turned into T-Rex symbols as well, leaving you with more wilds on the screen and more potential wins.

T-Rex Maximum Win
Bet the top $125 per spin stake and score a maximum line win and you could be rewarded with a $50,000 prize. This is awarded when you get four stegosaurus symbols on a payline, along with a wild symbol. There’s also a random progressive jackpot attached to this game that can pay out an uncapped amount to anyone lucky enough to trigger it. It’s not the largest progressive jackpot around, but it has reached around $20,000 before.

Is T-Rex Worth Playing and Who Should Play It?
We can say categorically that this slot is definitely worth playing. While it might not be as visually impressive as some other slots out there, you’ll find that T-Rex has a fantastic theme and offers excitement on every spin. What’s more, the free spins bonus is a superb one and enhances the fun even more when activated.

T-Rex is not significantly harder to pick up or understand than a typical multi-payline game, so it’s well within the reach of most people. However, if you’re looking for state-of-the-art visuals and branded dinosaur-based entertainment then Microgaming’s Jurassic Park series will suit your theming preferences better, though in terms of gameplay we feel this slot is every bit as much fun. 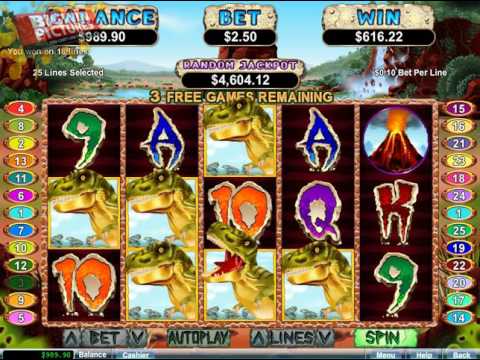 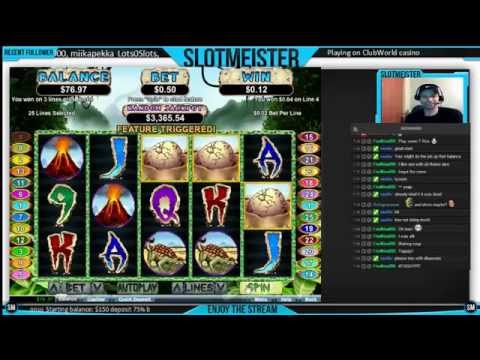 Learning how to play T-Rex takes a matter of minutes. Once you’ve made your payline and bet levels selection, just use the Spin button or set autoplay if you’d rather not keep clicking your mouse or tapping your screen. You’ll win an instant cash prize if you get two/three identical symbols lined up on a payline, starting from the first reel. To start the T-Rex bonus game, just get three or more egg scatters anywhere on the reels.

Knowing how to win on T-Rex , however, is impossible, as all outcomes are determined by a certified random number generator. Your next T-Rex jackpot might be one spin away, or it might not, and it’s this randomness that makes all online slots so much fun to play. Don’t believe anyone who says that they know how to win on this slot.

T-Rex comes with a return-to-player level of 97.50%, which is extremely high and therefore offers you an above average chance of winning. The T-Rex RTP means that $100 bet during a typical session will give you $97.50 in winnings. The amounts, however, that you actually win or lose will vary around the T-Rex RTP, as it is only an average.

Use the table we’ve created to find out about all the important features of the T-Rex online slot, such as how much you can bet per spin and what its RTP is. You should then load up the free version of the game on this page and have a few spins, just to see if the game is right for you. If you do enjoy playing, you can then spin the reels for real money at an online casino.

Other slots from Realtime Gaming

Play now
Swindle All The Way