Tomb Raider is a Microgaming slot for trap dodgers who like rope-swinging, puzzle-solving, tomb-raiding action.

Lara Croft’s acrobatic adventures were always going to make perfect subject material for an online game, and when Microgaming announced the development of their very first Tomb Raider slot machine the industry was ablaze with excitement. Thankfully the game lived up to expectations and is still wildly popular today despite having been around for about a decade and a half. Play Tomb Raider slots online yourself and you’ll rapidly see what all the fuss was about, in a game that has spawned a number of sequels and set a benchmark for branded action movie online slot games that very few have come close to equalling.

If you fancy checking out Lara in a role where she can win you some large cash prizes rather than just run, jump and fight then a few spins on our free Tomb Raider slots should be all the training you need to get you ready for the real thing. You can become fully acquainted with all the incredible features that will help you complete your mission to get rich, and when you do manage to snare some decent cash prizes when playing for real money, you’ll be able to keep everything you win rather than hand it over to the authorities.

We had an awesome time preparing our Tomb Raider slot machine review, enjoying a welcome shot of adrenaline as we teamed up with Lara for an amazing adventure that saw our bankroll fluctuate up and down just like the story arc of a top Hollywood action movie. Once you’ve read through what we’ve written you’ll have a good idea of what to expect and be in prime position to play for real.

Tomb Raider Theme
Microgaming have done a great job of capturing the essence of the Croft series of games and films here without being too obvious about it. The game is set deep within an important historical site and features bold brown, purple, and turquoise styling, as well as a reassuringly heavy, clunky, granite-hewn soundtrack that can be turned on or off at your leisure.

On the reels, you’ll find Lara herself a couple of times, plus you’ll also find a golden statue, some kind of puzzle, a tiger and the game’s logo. As is the case at many slots, the lower paying symbols are generic playing card values, and they’ve not really done anything to make them complement the theme, which is a little disappointing.

Betting Options
You’ll find that the minimum bet at this slot is $0.30, which is possibly going to be too high for those looking to play for micro-stakes. At the other end of the scale, the maximum bet at the Tomb Raider slot is $75. This will disappoint higher spending players, as other slots can have maximum bets worth hundreds of dollars.

Click the stack of coins in the bottom right of the screen to set your bet amount. Just choose from the many different options or hit the “Max Bet” button if you know you want to bet the maximum of $75 per spin. You won’t need to continually set your bet amount, as the game will remember how much you bet on the last spin.

Bonus Features
Firstly, you should keep an eye out for the game’s logo, as this is the wild symbol, meaning that it can substitute for all other symbols except the scatter and the gold statue symbols. Unfortunately, there are no multipliers attached to the bonus symbol, however it’s still really useful and you’ll want to see it on the reels as often as possible.

Lara herself – looking resplendent in her iconic tank top with a pistol for company – is, as you’d expect, a valuable symbol in this game, and she’s also the scatter symbol. Land 3 or more of her in any position on the reels at the same time and you’ll enter a free spins round, with 10 games provided on the house. Wins during free spins pay triple so they’re well worth waiting for.

Most other online slot games don’t extend any further than this, however Tomb Raider has a big trick up its sleeve. Should you land 3 or more of the rather sinister-looking gold statue bonus symbols on an active payline, you’ll be taken off-screen to a special bonus round. You’ll then be asked to select various bonus statues which will reveal prizes for you, with a maximum value of 100x your bet per line.

Tomb Raider Maximum Win
During the base game, getting five Tomb Raider logo symbols on an active payline while playing for the maximum stakes will net you a haul of $168,750, and you won’t have to risk life and limb by being squashed, shot, eaten or drowned in order to do it either. However, bigger prizes are available during the free spins, thanks to the 3x multiplier applied to all wins.

Is Tomb Raider Worth Playing and Who Should Play It?
Given that this game has been with us for so long and is showing no signs of losing popularity, it’s clearly a winning design from Microgaming and therefore worth playing. The graphics might not be top quality, however the gameplay makes every playing session an exciting one, plus the prizes on offer can be particularly impressive.

In terms of complexity, Tomb Raider is about average, so it ought to keep most players happy. Theme-wise it’ll appeal to everyone whether they’re into action adventure in general or yearn for a return to the 90s. The high return-to-player means that this is a great slot for those simply looking to make some money. The low to medium volatility means that wins are regular but often small, which will appeal to some, but not to those who want the chance to make money quickly. 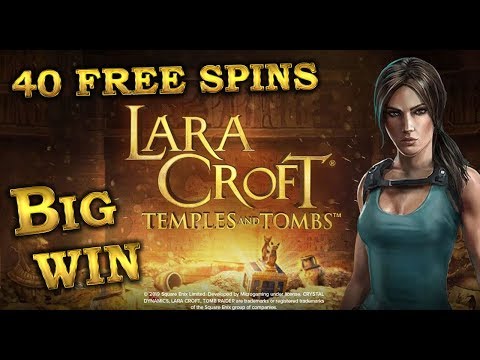 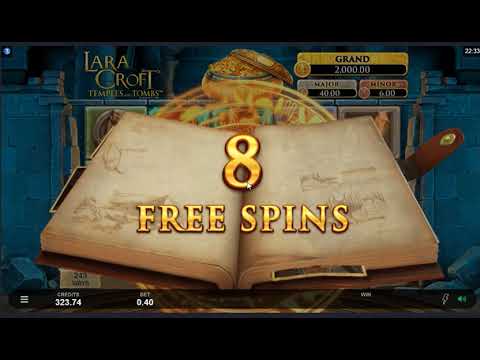 It’s very easy to find out how to play Tomb Raider . Simply set your bet leve and hit the spin button or choose autoplay if you want a long session without having to click or tap. You’re then free to get as much action as you wish. To win a cash prize, just get three or more symbols lined up on a payline, starting from the first reel. If you’re lucky, you could also start a Tomb Raider bonus game.

We can’t, of course, tell you how to win on Tomb Raider any more than we can tell you how to break in and steal the Crown Jewels. It’s driven by Microgaming’s tightly regulated random number generating software, so all outcomes are entirely unpredictable ensuring that no-one can ever cheat the casino. This means that there’s no way to guarantee you’ll win the Tomb Raider jackpot, or any other prize.

There’s a return-to-player figure of 96.56% on this game, which means you can typically expect a return of $96.56 for every $100 you bet – though the amounts you win or lose will vary around this average figure. The Tomb Raider RTP is higher than the average return-to-player, meaning you’ve got a better-than-average chance of winning when playing this slot. There is nothing you can do to change the Tomb Raider RTP.

We’ve researched this game in full and the table we’ve created will tell you all you need to know about this game, including its volatility and how much you can bet. After looking through the table, it’s time to load the free game on this page and spend some time getting to know this slot. If you enjoy playing, you can then play for real money at one of the many online casinos featuring this game from Microgaming.