Break Da Bank is a Microgaming slot where vaults can be broken to bring in riches and big payouts.

Microgaming has created some of the most popular and iconic slots of all time, and one of these is undoubtedly Break da Bank. The simplicity of this game won’t be to everyone’s liking, but those who prefer classic slots with just three reels and a few paylines will love what they find when they play the Break da Bank slot machine. Overall, it’s one of the simplest games out there, but the exciting gameplay ensures every spin of the reels is an enjoyable one.

On this page, we’ll be taking a close look at this exceptionally popular classic slot from Microgaming. That’s not all, as we’ll also be letting you play free Break da Bank slots on this page, giving you the chance to test drive the game before committing to betting any of your own cash. If you enjoy playing, which we’re pretty sure you will, you can then head to a casino featuring Microgaming titles and play Break da Bank online for real money.

In this Break da Bank review, we’ll be taking you through all the important aspects of this game, including how to play and how much the jackpot is worth. Once you’ve finished reading our Break da Bank slot machine review, you’ll be more than ready to start playing this superb classic slot from Microgaming!

As the name hints at, the theme of this slot is a bank heist. However, you won’t find much relating to the heist on or around the reels, as Microgaming has decided to keep things as simple as possible. So, the background is plain purple with a large pile of gold coins at the bottom. The reels themselves are also simple – you won’t find any elaborate styling surrounding them at all.

On the reels, you’ll find extremely simple symbols. There are BAR, double BAR and triple BAR symbols, alongside dollar signs and the game’s logo, which is both the most valuable symbol and the wild symbol. Black lines on the reels denote the five paylines always in play. There’s nothing else at all to see on the reels – we told you this was a simple online slot!

Changing your bet amount is simple. Just click the plus and minus arrows either side of the bet amount, or alternatively click the bet amount itself and then use the slider. As is nearly always the case with slots, the more money you bet, the more you could win. However, don’t be tempted to bet more than you can afford to lose.

Break da Bank only has one bonus feature to mention, and it’s the wild symbol. This is the game’s logo, and it can substitute for all other symbols on the reels. When it substitutes for one symbol, the winning combination will have a 2x multiplier applied to it, and when it is used twice in a combination, a 4x multiplier will be applied to the prize.

While not a bonus feature, it’s also important to understand the way in which the paylines and the wild symbols interact. Get three logo symbols on a payline and the prize will vary, depending on which payline is involved. The first payline has the lowest of the five possible prizes, while the fifth payline has the highest.

The maximum possible win per payline at Break da Bank is 480x your bet, and this is won when you manage to get Break da Bank logos across the fifth payline. However, you can get winning combinations on more than one payline at the same time, making it possible to win even larger prizes.

Is Break da Bank Worth Playing and Who Should Play It?

Break da Bank is a slot that’s well worth playing, as it is regarded as one of the best classic slots to ever be released. Microgaming has made sure it’s incredibly easy to play, plus they’ve also added wild multipliers to the game, just to add a little bit more excitement. The prizes can be phenomenal, which is another big reason why this game is worth playing.

Break da Bank is firmly aimed at those who want an incredibly simple playing experience, devoid of complex bonus features and complicated gameplay. It’s also aimed at those with larger bankrolls, as the minimum bet of $5 per spin is going to be too expensive for those without much money to spend. Those who prefer games with high volatilities should also enjoy Break da Bank. 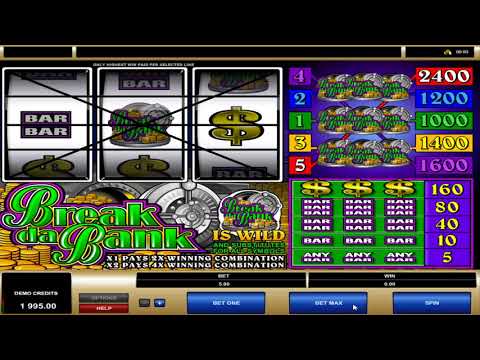 How to Play and How to Win

Working out how to play Break da Bank couldn’t be much easier. Just choose how much to bet, and then spin the reels. If you manage to get three identical symbols or three mixed BAR symbols on a payline, you’ll win a cash prize. You don’t need to worry about bonus features, as there’s not even one Break da Bank bonus game on offer. Any money you manage to win will be automatically paid into your online casino account.

Anyone trying to work out how to win on Break da Bank will be disappointed to find that there’s no way to guarantee prizes while playing. This is because this game, along with every other reputable slot, is entirely random, and there’s nothing you can do to alter this. So, instead of trying to work out how to win the Break da Bank jackpot, just accept the game is random and enjoy every spin, celebrating any wins when they do spin into view.

The Break da Bank RTP is 95.75%, which is just slightly above average. For those who don’t know, the return-to-player tells you how much money the average player will win back. However, you aren’t guaranteed to win this money back – some will win thousands, which needs to be balanced out by many other players not winning anything. There’s no way to change the Break da Bank RTP.

Looking to quickly find out about a specific feature of the Break da Bank slot? If so, you should take a look at the table we’ve created, which tells you about everything from the bet limits to the slot’s volatility. After you’ve looked at the table, it’s time to start playing the game. You can do this for free on this page, or alternatively, you can head away and play for real money at one of the many sites offering this hugely popular game from Microgaming.