Even people who don’t spend much time learning about casino streamers know the name of Roshtein. Called the casino-philosopher by fans and foes alike, Roshtein is arguably the world’s biggest casino streamer. Streaming live since early 2016, Roshtein has gone from strength to strength and continues to lead the pack when it comes to the world of the online casino live stream.

A true showman with the personality to match, Roshtein plays the slots that have the biggest stakes, and the fact that he has the highest number of followers out of all of even the most popular casino streamers speaks volumes about his watchability.

Some casino streamers are calm and relaxed, but not Roshtein. He can be a controversial casino streamer and was even briefly suspended by Twitch at one point. The big stakes that he plays with are the reason why he gets written about more than any other casino streamer, and when it comes to bravado and drama, he’s hard to beat! Roshtein started experimenting with streaming in 2015, but in 2016, the Swedish player started to get a real name. Of course, Roshtein isn’t his real name (which is inspired by the legendary US gambler/kingpin/racketeer Arnold Rothstein). Born in Sweden with the name Ismail Swartz, the casino streamer is now immediately recognizable as Roshtein.

With the personality to match, Roshtein plays slots with the biggest stakes and has more followers than any other casino streamer. His long hair, ever-present hat, and his large bets make Roshtein one of the most recognizable casino streamers in the world, but what explains his popularity? The simple answer is that his personality is as warm as you could get, and his excitement and enthusiasm are extremely infectious. That makes him easy to watch, and you quickly get swept up in the excitement of his games. Those big bets help, because he rarely plays at less than €10 a spin. So, when he wins big, he wins big, and that only adds to the thrill of watching his channel. Still residing in Sweden, Roshtein can be found online most nights, playing a wide range of online casino games.

Although Roshtein will vary between high variance slots and lower volatility ones, his favorites remain the same. He can usually be found playing Money Train, Dog House, and Book of Dead, which are all extremely popular. The popularity of those slots combined with the high stakes that Roshtein plays with all add up to thrills and excitement, and the more aggressive he bets the more that fans love him for it.

In early January 2021, Roshtein scored one of the biggest slots wins in the online casino live stream history. Playing Money Train with a €50 per spin bet, he managed to win €185,000, a record win on that slot that has yet to be beaten. It’s no wonder that fans continue to subscribe to his Twitch channel and enjoy the man who has earned the title of casino-philosopher.

Update: Maintaining his status as one of the most popular streamers this year, Roshtein was able to take home over 1 million euros from Book of Shadows, a Nolimit City Slot! Occuring in April this year, Roshtein is no strangers to big wins. Given the much higher number of hours he dedicates to playing, his odds are higher than others. 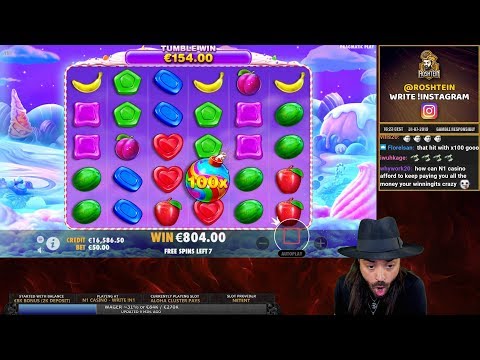