Vikings Go Berzerk is a YGGdrasil slot with a action-packed adventure with superb animations that will blow your mind.

YGGdrasil Gaming is known for routinely exceeding normal gameplay requirements where online slots are concerned, but talk on the street is that they outdid themselves in all parameters with their incredibly sublime Vikings Go Berzerk slots! This online slot machine is all that a slot is supposed to be, which means it is gripping, alluring, entertaining and fabulous to the ultimate, to the point players could almost believe they are playing an acclaimed PlayStation 4 video game from the most popular gaming studios, rather than an online slot machine! Yes, Vikings Go Berzerk is one of a kind, and you should play it now while you have the chance!

Play Vikings Go Berzerk online and on all the devices in your home or closet that can connect to the internet. Equipped with 5 reels and 25 paylines and so packed with bonuses players start thinking every day is their birthday, this online slot like any good Viking worth his salt does not take any prisoners and will take players on an epic and totally unforgettable journey they will be fondly reminiscing about for years to come! Play the Vikings Go Berzerk slots online on desktop, tablet or smartphone, take on the role of a berserk Viking or two, and smash your way into adventures and fortunes like it is your birthright! Play now and get as berserk as you like and for as long as you would like!

You can always play free Vikings Go Berzerk slots at any online casino you like or bet for real money when you are feeling up for expanding the thrills to be gained here. Free play at any online casino means access to all gameplay aspects is free, but this mode does not support real money wins. Feel like betting and winning real money? Then play the real money mode of this eye candy-crammed and visually-stunning online slot at the online casino you are registered on and enjoy some stupendous real money wins either during base gameplay or any of the many bonuses this slot packs like it is nothing! Play now for an immensely limitless Viking-loving experience!

The Vikings Go Berzerk slot machine from YGGdrasil Gaming is the eagerly awaited sequel to the wildly popular Vikings Go Wild slot from the same firm. It improves on the original in every possible aspect and is one of the most graphically impressive and feature-laden slots to be found anywhere in this deserted corner of the galaxy! Most impressive it sure is, with every member of this Viking Go Berzerk slot review team giving it a solid seal of approval and two thumbs up!

Now, this online slot machine has 5 reels and 25 paylines, plus a Viking theme so thick you could butt your head against it and leave a scar! The setting is a Viking ship on the high seas and the visuals are simply one of the best that ever licked the eyeballs of this Vikings Go Berzerk slot machine review team! Featured icons include a quartet of Vikings that look like they eat buckets of nails on the daily, plus 4 coins made out of various metals. There is also a wild and scatter, with the former not being able to replace the latter when winning combos are being formed.

In the matter of bonuses, the Vikings Go Berzerk slot machine has so many of these that players might feel obliged to jump out of their skin with glee! These bonuses provide access to cash awards, free spins, sticky wilds, wild reels and so much more. Indeed, you could almost write a book on the incredibly varied and entertaining bonuses to be found in the Vikings Go Berzerk slot machine!

Now, it’s time to analyze this online slot. First, the visuals and audio effects are A-class in every way and this review team is hard-pressed to recollect a slot so good looking and sweet-sounding. The bonuses in place here are more than plentiful and innovative, though the theme itself cannot be really described as unique.

With a massive list of massively rewarding bonuses, graphics as good as that to be found in the latest video games, immense playability and immersiveness, there’s no doubt at all that the Vikings Go Berzerk slot is a very high flyer that packs so much fun and thrills that players can almost expect their brain matter to swell up a little when playing this amazing slot! 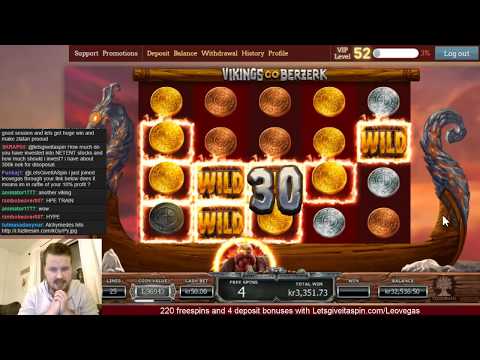 The Vikings Go Berzerk jackpot slot mostly follows the same gameplay mechanics as its predecessor, which means folks who have played the Vikings Go Wild slot will find its sequel to be both familiar and sweetly strange! The action here takes place on 5 reels and 25 paylines and players can wager from 0.125 to 1250.00 coins per spin, with the big bet limit sure to appeal to high rollers looking to put their money to some use!

The usual gameplay buttons are provided on the bottom of the screen of this slot, though they are not as eye-catching as they should be. That won’t present much trouble to players, though gameplay buttons with more color and pizzazz on them would have been more preferable. Thankfully, you do not have to be a Viking or be descended from them to know how to play Vikings Go Berzerk jackpot slots! Yes, the gameplay is intuitive and even if you are a newbie, a few minutes is all you will need to find out which gameplay button does what, learn how to win on Vikings Go Berzerk slot and scare your enemies into submission!

The Free Spins bonus game found in this slot is triggered when at least 3 scatter icons land on the reels. 3, 4, or 5 of these icons grants access to 7, 14, and 21 free spins respectively. However, before this Vikings Go Berzerk bonus game can begin, a bonus reel will be spun, with this granting access to any one of the following: a single wild reel, up to 3 extra free spins, a single sticky wild, the placement of 5 treasure chest and golden chest icons on the reels and the Ragnarok Free Spins where all Vikings go berserk.

In the Free Spins bonus game, any Viking icon that shows up on the reels does battle with a Siren. Should the Viking icon come out of the battle victorious it will be transformed into a sticky wild. Also present is a Rage Meter and this is positioned above the gameplay buttons, with each Viking having its own meter. This meter fills up during gameplay whenever each particular Viking helps form a winning combo. Once a meter is full, 7 free spins will be awarded, during which the Viking whose meter is full is activated in Berserker mode. In this mode, the Viking can be expected to always emerge victorious against the Siren and will change into a sticky wild till the end of the free spins bonus round.

The statistics and features of the Viking-themed and absolutely feature-crammed, plus high octane and pulse-shredding Vikings Go Berzerk slot machine are as follows:

Other slots from YGGdrasil

Play now
Valley of The Gods