Nero’s Fortune is a Quickspin slot that brings the tension to players with realistic and engaging gaming mechanics.

The grandeur of Ancient Rome never seems to stop providing endless inspiration for casino games, but when you play Quickspin’s amazing Nero’s Fortune slot machine you’ll be treated to a full-scale cinematic extravaganza that sweeps the competition to one side. It uses up-to-the-minute graphics and sound to whisk you back two millennia into a beautifully rendered recreation of The Eternal City complete with temples and statues set against a stunning golden sunset. Play Nero’s Fortune online and it’s perhaps the closest you’ll get to boarding a time machine and going back to experience the world’s most iconic civilisation for real.

If all of this seems like a lot to take in, then there’s no need to make any real money wagers unless you’re absolutely sure you want to. You can play free Nero’s Fortune slots on our demo game for as long as you like, allowing you to familiarise yourself with its carefully designed features until it feels like a completely natural environment that you’ll want to re-visit as often as possible. If you want to get changed into a toga whilst you play you might find it helps to get you in the mood; alternatively, some red wine from a goblet and a few peeled grapes might also do the trick.

You’re advised to read our Nero’s Fortune slot machine review in full so that you can get the best out of this exceptional game right from the outset, though in a nutshell it’s very fair to say that we gave it the thumbs up. Quickspin have notably used their latest 3D engine in its production and the extra resources have made for excellent results.

Nero’s Fortune Theme
Set against the stunning backdrop is a stone tablet complete with pillars, gold trimmings and a classically-designed pediment – all of which encloses a 5×5 playing grid. Symbols fall onto the grid in a tumbling or cascading style rather than via traditional spinning reels, and the stone tablets that house them bear the images of wolves, eagles and lions along with tradition poker icons, with the low-key shades of brown, green and blue used to complement the brighter amber and gold hues used for the win calculator and golden coins that shower from the grid when you get lucky.

Successful rounds also see all tiles comprising a winning row dramatically lit up around the edges and thrown off the board with a slashing sword sound effect. During the practice session we used to gather data for our Nero’s Fortune review we scored quite a few wins, and found this particular touch especially satisfying – and the game features a number of other extra flourishes in a similar vein that lifts it well above its peer group.

Betting Options
You can take part in this online slot from just $0.20, though if you’d rather go for a win fit for an emperor there are options that will let you wager up to $100 on a single spin.

Altering your bet level is simple: Just use the up and down arrows in the orange box at the bottom of the reels marked ‘Total Bet’, and you’ll be ready to go in no time at all.

Bonus Features
When winning clusters of symbols are removed from the grid, an ‘X’ symbol will appear in the resultant gap before new symbols replace those that formed the cluster. There’s a chance that a multiplier will appear in one of the positions, and it will remain there until it’s used or the tumbling comes to an end.

Land 3 or more bonus scatter symbols on 1 spin and you’ll trigger an impressive free spins round. Spin in 3, 4 or 5 scatters to get 10, 12 or 14 free games, at which point the playing grid will dramatically tilt back in its entirety and some special bonus multipliers are added randomly onto the grid. These work in a similar way to those that appear in empty spaces on the grid in the base game, though in this case they’re also dynamic and can increase in value – so you end up with some colossal-sized wins once you’ve triggered this round, which we felt was the defining feature of the entire game and something you’ll need to stick around for if you want to experience everything this slot has to offer.

Nero’s Fortune Maximum Win
Make it onto the emperor’s throne in this game and you’ll receive a payout of 8,100x your bet – which means a maximum prize of $810,000. Not quite enough to start your own empire but it’ll buy you your own luxury Tuscan pad and plenty of Chianti to put in the cellar.

Is Nero’s Fortune Worth Playing and Who Should Play It?
For sheer visual drama alone, this game is well worth playing. Its cluster win and multiplier mechanisms take some getting used to if you aren’t familiar with how these ideas work, though despite working slightly differently to most slots it’s not hard to pick up. We’d therefore recommend it to players of any level of experience. 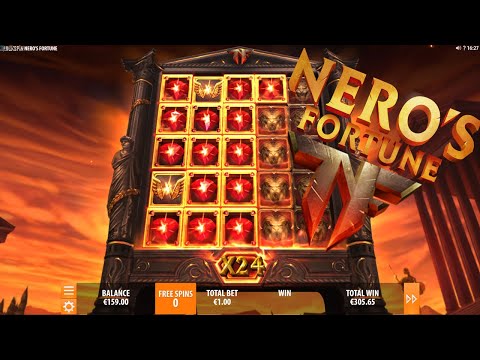 It’s easy to learn how to play Nero’s Fortune. After setting your bet level just use the large spin button to the bottom right, or if you’d rather not repeatedly click or tap for every spin just use the autoplay control right next to it. To win a cash prize, just get five or more matching symbols in a cluster. You could also win a significant prize if you manage to start a Nero’s Fortune bonus game.

It’s not possible to tell you how to win on Nero’s Fortune, as the game is based entirely on luck. A random number generator is used to ensure the symbols that appear truly are random, and there’s no way you can influence it. So, instead of trying to work out a way to win the Nero’s Fortune jackpot, just accept that the game is random and enjoy spinning the reels.

There’s an impressive average return-to-player figure of 96.21% on this slot. The Nero’s Fortune RTP figure equates to expected winnings of $96.21 if you wager a total of $100 in a typical session. You can, however, anticipate wins or losses that vary considerably around this statistical average when you actually play. There is no way to change the Nero’s Fortune RTP.

Take a look at the table we’ve created, which tells you about all the important features of this superb online slot, such as what the volatility is and how much you can bet per spin. Once you’ve taken a look, we’d recommend starting up the free Nero’s Fortune slot on this page and trying the game for yourself. If you enjoy playing it, you can then head off and play the game for real money at an online casino.

Other slots from Quickspin

Wild Tome Of The Woods