Big Bad Wolf is a Quickspin slot with superb graphics that is enough to encharm any player.

Nearly everyone knows the story of the Three Little Pigs and their quest to stay safe from the Big Bad Wolf . Quickspin have added their own twist to this classic tale with their Big Bad Wolf slot machine, a slot with 25 paylines, as well as some fantastic features and prizes that can be worth thousands. Check out our review of this top Quickspin slot to find out more!

You won’t just find a Big Bad Wolf review on this page though, as you’ll also be able to play free Big Bad Wolf slots. These offer the same gameplay as the real money game, however you won’t have to spend a cent. So, you can decide whether you like the game and learn its rules without risking anything. You can then play Big Bad Wolf online for real money at a casino if you enjoy playing the free version.

In this Big Bad Wolf review, we’re going to look at every important aspect of this game from Quickspin. Once you’ve finished reading, you’ll know all about the jackpot, bet sizes and more, so you’ll be ready to play. So, keep reading our Big Bad Wolf slot machine review to find out more!

It won’t surprise you to find that this slot is based on the famous story of the Big Bad Wolf , notorious for terrorizing the Three Little pigs by trying to blow their houses down. The background to the reels is rolling fields, which look superb, while the reels themselves look like one of the houses owned by one of the pigs.

The symbols look superb, with each symbol made to look like a part of the house. The Three Little Pigs, along with their soft toy, are the highest paying symbols on the reels, while the lower paying symbols are generic 10-A ones. These generic symbols can look boring at some slots, however the ones at Big Bad Wolf have been designed to work fantastically with the theme.

The minimum bet at this online slot is $0.01 per payline. You have to have all 25 paylines active on every spin, therefore meaning that the minimum total bet is $0.25, which might be slightly too high for some. The most that can be bet per spin is $100, which is $4 per spin. This should be more than enough for most players of this slot.

It’s really easy to change how much you bet per spin at the Big Bad Wolf online slot. You’ll see your current bet amount displayed under the reels. To change it, just click the up and down arrows next to your bet amount. Once you’ve chosen a bet amount, it will remain the same until you change it or close the game. The more you bet, the more money you could win.

There are no fewer than three different features to mention at the Big Bad Wolf slot machine. What’s more, there’s a standard wild symbol, which is represented by the beehive, which can substitute for all symbols except the wolf scatter and the moon symbols. The wild is also the jackpot symbol at this online slot.

The first feature to mention is the Swooping Reels feature. Whenever you get a win, you’ll be paid your prize, before the winning symbols disappear and are replaced by new ones. This gives you another chance to win. This will continue until no new winning combinations are made.

But what is the Blowing Down the House feature? Well, during the free spins, moon symbols can land on the fifth reel. When they do, they are collected. Collect three moons and the Big Bad Wolf will blow down the wooden house, leading to you receiving two extra free spins. When you collect six moons, the Big Bad Wolf will blow down the brick house, which will see you getting another two extra free spins, as well as activating a 2x multiplier, which will be applied to all subsequent wins during the free spins bonus round.

So, what is the most that can be won when playing this online slot? Well, the maximum prize you can win on a payline during the base game is 40x your bet, which equates to $4,000 for those playing at the highest stakes. This is won when you manage to get five wild symbols across a payline. You can actually win more than this on a spin though, as you can win multiple prizes on a spin, thanks to the Swooping Reels feature and the fact that you can win prizes on more than one payline at the same time. The multiplier offered during the free spins can also boost wins considerably.

Is Big Bad Wolf Worth Playing and Who Should Play It?

Big Bad Wolf is a fantastic slot and is definitely worth playing. The bonus features at this slot are loads of fun, which should appeal to many, plus the prizes can be huge, especially if you get a long run of prizes in the Swooping Wins feature, as well as the 2x bonus found in the free spins bonus. With an RTP of 97.34%, this game gives you a better chance of winning than most other slots out there.
This game should be played by anyone primarily concerned with giving themselves the best chances of winning, due to the high RTP boasted by Big Bad Wolf . The fact that it has a low to medium volatility means that it’s suitable even for those who have low account balances, as small wins should regularly be won, allowing account balances to be topped up often. Those looking for the excitement and unpredictability of a high volatility slot might not be so keen on Big Bad Wolf though. 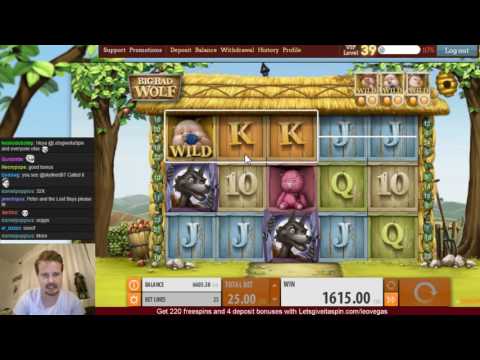 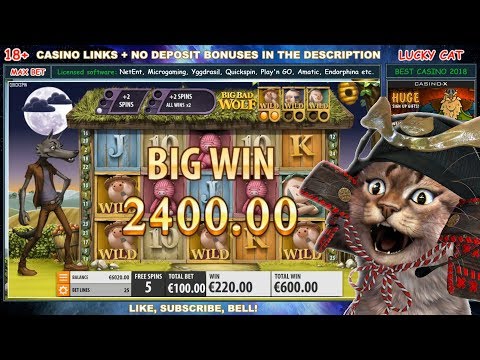 Looking to find out how to play Big Bad Wolf ? If so, you’ll be glad to find that it’s simple. Just choose how much to bet, then spin the reels. You’ll win a prize if you manage to get three or more identical symbols consecutively on a payline, starting from the first reel. You can also substitute any standard symbol with a wild symbol. You’ll also win a prize if you get two or more scatters anywhere on the reels, while three or more scatters on the reels will see you starting the Big Bad Wolf bonus game. Any prizes you win will be automatically paid into your casino account.

If you want to know how to win on Big Bad Wolf , then you’ll be disappointed to find that there’s no way to make sure you win. This means that everyone has the same chance of winning the Big Bad Wolf jackpot. There are some people online who say that they know how to make money from slots, however don’t listen to them, as slot machines are completely random.

The Big Bad Wolf RTP is amazing, as it is a huge 97.34% – there aren’t a lot of slots that can boast a return-to-player that’s higher than 97%. But what exactly does the Big Bad Wolf RTP mean? Well, it means that, on average, the game will pay back 97.34% of money spent on it. You aren’t guaranteed to win this amount though, as some will win the jackpot, meaning others have to lose in order to balance things up.

Take a look at the table we’ve come up with to quickly find out about some of the most important pieces of information about the Big Bad Wolf slot, including who made the slot and how much money you could win. All you then need to do is play the game for free and see if you enjoy it. If you do find Big Bad Wolf to be a fun slot, you can play it for real money at an online casino. Hopefully you’ll win some big prizes when you do!

Other slots from Quickspin