Jurassic Park is a Microgaming slot that is a prehistoric, dangerous, dinosaur-themed homage to the classic film series.

When Michael Crichton penned Jurassic Park there’s a good chance he never imagined how wildly popular his book would turn out to be. The best selling novel was soon turned into a blockbuster movie that shocked audiences to the bone and made them more appreciative of the extinct fauna of this world. Seminal and sweet as the Jurassic Park book and its movie adaptation turned out to be, it soon formed the theme for many a slot and video game. One of these online slots happens to be the Jurassic Park slots from Microgaming and what a hard-hitting monster it is!

The Jurassic Park slot machine from Microgaming is wholly based on the book and movie of the same name and utilizes a host of characters and icons that folks who have read the book or watched the movie would immediately recognize. It has 5 reels, 3 rows and 243 ways to win, plus theme-related bonus and the force of a tornado propelled by a hurricane!

Want to play Jurassic Park slots online? Well, what are you waiting for, champ? Just pull out your laptop, desktop or mobile and login to the online casino you have an active account on and play this slot while keeping an eye out for stampeding dinosaurs that might want to take a good bite out of your soft hide!

This slot is accessible every hour of every day and is offered at a multiplicity of online casinos. In the very unlikely event that you are unable to find it in the online casino you have an active account with, you should focus on registering on another online casino that has this slot and wants an opportunity to show you they mean business and dump all manner of sweet bonuses on your lap. Search for this online slot machine now and get to playing!

Like virtually every online slot ever made, the Jurassic Park slot has a free mode. Anyone can choose to play free Jurassic Park slots whenever they get an urge to. Every aspect of this slot is accessible from within its free mode, with players able to go as deep as they want and trigger every bonus mode they can reach. Once they are ready, they can choose to migrate to the paid variant of this slot, where they can engage in real money play and get to win real money they can throw around when everyone is looking!

Jurassic Park , the movie was not a walk in the park for most viewers, who understandably often screamed their lungs out as monstrous dinosaurs rampaged without check. This Jurassic Park slot Review is certainly not going to get folks screaming in fear or glee, but we would dearly want to see that happen!

Now, the Jurassic Park slot machine has 5 reels, 3 rows and all of 243 ways to win. The setting is a spooky jungle background and the visuals are sharper than a knife and astounding in their fidelity. Icons on the reels include 5 different dinosaurs, all of whom look capable of going against a regiment of Marines and snacking on some SEALS for dinner! These dinosaurs are the Triceratops, Brachiosaurus, Dilophosaurus, Tyrannosaurus Rex and Velociraptor. Other icons are characters from the iconic movie and include Dr. Alan Grant, Dr. Ellie Sattler, John Hammond, and Dr. Lan Malcolm.

The theme here is much the same as in the eponymous movie, which focused on dinosaurs running around in a jungle island and causing enough havoc to make a volcanic eruption in a major urban center look tame! Visually, this slot was one of the better looking that this Jurassic Park slot machine review team have set eyes on this week, though the theme is not all that unique because there are quite a few slots with similar themes.

But when the fact that this slot employs a mostly innovative bonus round with free spins that are themed around different dinosaurs is considered, we can’t help but conclude that the Jurassic Park slot from Microgaming is worth its weight in gold and is a solid if scary slot that punches above its weight class! 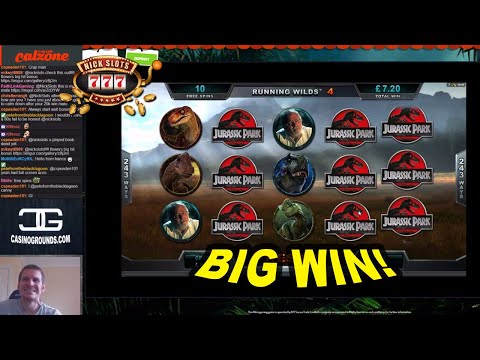 The gameplay is the stuff of simplicity in this movie/book-themed online slot, so players are very unlikely to be confused about how to play the Jurassic Park jackpot slots. Merely landing a bunch of winning icons on the reels will trigger a win and a payout, with gameplay buttons being so clearly labeled bettors could make bets while staring at the midday sun!

Apart from the icons already mentioned in this review, there are wild and scatter icons and these are important in the overall gameplay mechanics. The wild is represented by the game logo and this can replace every standard icon save for the scatter. It is also a stacked icon and in this mode can potentially stack up and enhance winning chances. The scatter activates the Free Spins bonus round, which seems to have been engineered to overwhelm players with pleasure!

During base gameplay in this online slot machine, a randomly activated bonus game called the T-Rex Alert Mode often gets triggered. This Jurassic Park bonus mode is active for 6 spins, during which the T-Rex icon appears on the middle reels. A maximum of 35 wild icons are placed on the reels during these 6 spins and these give a decided boost to the payout since they can become stacked.

The first of the 5 free spins mode is the Tyrannosaurus Rex mode. Here, players get wild reels, stacked icons, and guaranteed wins. The second is the Velociraptor free spins. This too has stacked icons, plus random win multipliers of up to 6x and split wilds that boost winning chances. The third is the Brachiosaurus free spins where players get access to extra free spins, apart from the dozen originally awarded, plus win multipliers of up to 6x that are active on a random amount of spins. The fourth feature is the Triceratops spins. This comes with respins, running wilds, and stack nudges that activate at random. This all makes for rather enthralling gameplay experience.

The last free spins feature in the Jurassic Park jackpot slot is the Dilophosaurus free spins. This has winning wilds that remain in place following a winning combo. Here, the dinosaur after whom the feature is named appears on the reels and hawks some spit at an icon, thereby transforming it into a wild. Quite a sight this is, especially for players who seek how to win on Jurassic Park slots, even if that involves a spitting dinosaur who’s bigger than a mansion in Beverly Hills!

The Jurassic Park slot RTP is 96.67%. This makes it a slot with an above-average return-to-player ratio. The volatility appears to be in the medium range, with maximum wins of more than 6,000x the stake during the Free Spins bonus feature.

The Jurassic Slot RTP makes for an entertaining and rewarding play, with bettors getting to feast their eyes on some of the sweetest graphics to be had, while getting dinosaur-sized payouts!

Listed below are all the vital statistics and features of the Jurassic Park slot machine: