Captain Venture is a Novomatic slot that drops the anchor with its nautical, privateering, seafaring expedition theme.

All you landlubbers, come aboard and sail the high seas with Captain Venture himself! This invitation is a high honor in itself and you can be sure of experiencing adventures anew and perhaps discovering foreign lands and enough treasure to make the rest of your days filled with fun, laughter, rich food, and wine, plus vacations to the most exotic places! Are you up for that? Then sign here and join Captain Venture on his voyages of discovery across the dangerous oceans!

The Captain Venture slot comes to us from Novomatic and is a sea/adventure-themed slot centered around the good Captain Venture , who rumor has it can sail a battleship across a reef without scratching it in the slightest! 5 reels and 10 paylines are made available here and that is big enough for players to frolic on and see their dreams come true in ways too glorious to be believed! Ready for adventure and willing to sacrifice for it? Then sign up now on the crew sheet and get ready to sail away to places strange and wonderful!

If you have a nose for adventure on the high seas, the Captain Venture slot machine is short of a crew and can use you! Sign up on this online slot and access it online on any device within reach that can connect to the internet. Feel free to play Captain Venture slots online on any online casino you come across and see what rewards that sailing with the best crew in the world can bring you! Play Captain Venture slots online and at any online casino you want to, so long as they are registered to offer their services to people in your country. Play with a will and do the jobs you are asked to and Captain Venture himself might make you the mate! Aye, the ship could even be yours in a few years or so if you play your cards right!

The free play mode in this slot does not however support real money wins. Thus, if real money wins is what you are looking for, you need to play this nautical slot in its real money mode. Who knows, you might be lucky to win enough to buy or hire a ship of your own and show Captain Venture you are not to be messed with. Play now for free or real money wins and make the sails creak with vigor!

Icons present in this slot machine include playing card values, a map, anchor, and a sailing ship. The good captain is the wild, while the scatter is a ship’s wheel. Both these icons play important roles in the gameplay, with the scatter activating a Free Spins bonus round where wins get multipliers of 4x, while the wild icon boosts all wins that it gets involved in with multiplies of 8x. That is all shades of incredible, at least where this Captain Venture slot review team is concerned.

Now, the Captain Venture slot machine is OK for the purpose. The theme is a well-worn one though and the graphics are good but not stunning, same with the audio. However, with wild wins of 8x and a free spins bonus where all wins are quadrupled in value, this slot can be said to have a generous playability potential. It is fun to play too and the screen is colorful and more than acceptable. Overall, the Captain Venture slot machine review team is of the opinion that this slot does well for itself and is worth some avid exploration. 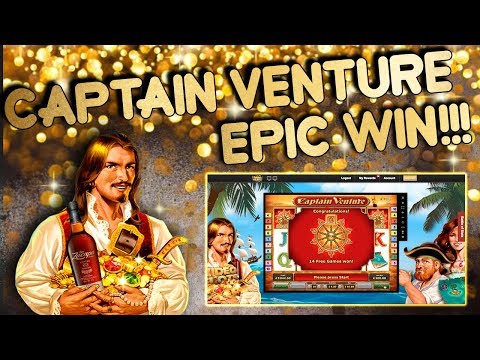 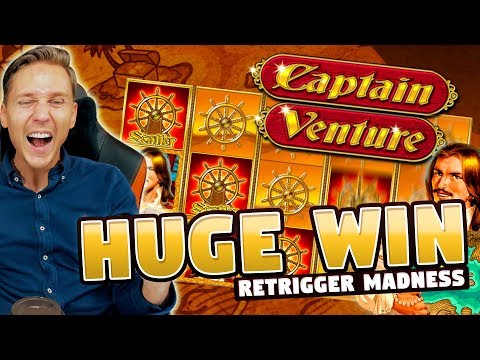 Haven’t yet figured out how to play Captain Venture jackpot slots? Well, we are sailing to the rescue as fast as the wind will allow! Now, with 5 reels and 10 paylines, this slot does not present much in the way of surprises and is simple to access and spin up.

Beneath the reels are all the gameplay buttons players might need and making bets take a few seconds at the most. Folks can play from 4 to 1,000 credits on each line here and get up to 10,000 coins back. To land a win, players are required to line up 2 or 3 matching icons anywhere on the reels, which is better than expected.

Now, apart from the standard icons, the Captain Venture jackpot slots have a wild and a scatter. The wild replaces all standard icons and any wins it helps bring into being will enjoy an 8x multiplier. Befriending wilds and integrating them in winning combos is therefore a must for players who need to know how to win on Captain Venture slots.

The scatter on its part triggers the Free Spins bonus game whenever players land any 3 of these icons on the reels. Up to 20 free spins are awarded here and loads more can be triggered from within the feature. Wins in this Captain Venture bonus round are by default quadrupled in value. This makes it one of the most rewarding free spins bonuses to be had anywhere.

The important statistics and features of the Captain Venture slot machine are as follows:

Other slots from Novomatic

Play now
Secret of the Ankh

Play now
Legends of the Seas

Play now
Lord of the Ocean 6

Play now
Eye of the Dragon

Play now
Book of the 7 Seas

Play now
Lord of the Ocean